AN ability to carry five people at a cruising speed of more than 125 mph. on the two hundred horse-power of a Gipsy Six engine is the outstanding feature of the Heston Aircraft Company's Phoenix. All five occupants have the good view which is to be expected with the high-wing layout, and they travel in a state of peace and quiet which is certainly unusually good for a single-engined machine.
From the design point of view the Phoenix, which is of all-wood construction, is interesting by virtue of the monocoque rear portion of the fuselage and of the Dowty retractable undercarriage which is gathered up into a pair of stub wings from which the bracing struts run to the wings. The cabin space is entirely unobstructed and the business of entering or leaving the machine would have no difficulties for the most infirm. Comfort has, in fact, been the primary aim of the designers, and the unusual roominess of the cabin will please both fare-paying passengers and others.
The control wheel is of the swing-over type, and the essential controls are centrally placed so that the machine can be flown from either of the two front seats. A very large locker in the dashboard is available for maps and for all the assorted material which the pilot usually has to strew on the floor. The undercarriage, which is hydraulically operated, can be lowered in a matter of sixteen seconds.
Although the Phoenix has been designed primarily for charter, feeder-line and similar work, the machine's virtues of silence, simplicity and economy should appeal to the private owner who requires something rather larger and more luxurious than usual, yet who does not want the additional complication of twin engines. When in the raised position the wheels lie in recesses in the lower stub wings already mentioned. The trenches provided for the reception of the struts are covered by a shield so that when the wheels are up the whole underside is left smooth. This, of course, greatly facilitates emergency landings with the wheels retracted. A tail wheel of the fully castoring and spatted type is fitted.
The specification of the Heston Phoenix is as follows: Weight empty, 2,000 lb.; disposable load, 1,300 lb.; span, 40ft. 4m.; length, 30ft. 2in.; maximum speed, 145 m.p.h.; cruising speed, 125 m.p.h.; landing speed. 55 m.p.h.; initial rate of climb, 650 ft./min.; cruising range, 500 miles; price, ?1,980. Makers: Heston Aircraft Co., Ltd., Heston Airport, Hounslow, Mddx.

ANOTHER FLYING LABORATORY: The first of the new Heston Phoenix monoplanes with Series II Gipsy Six engine and v.p. airscrew has been ordered by Standard Radio and will be used for experimental and demonstration work. 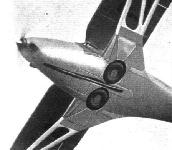 ECONOMICAL COMFORT: A new impression by a Flight photographer of the Heston Phoenix, which carries four passengers, a pilot and luggage at a cruising speed of 125 m.p.h. on 200 h.p.

The modern trend in cabin types is illustrated in this type, the Heston Phoenix

OUTSTANDING CIVIL TYPE: One of four machines which made their first appearance during 1935: (2) the Heston Phoenix five-seater with 200 h.p. Gipsy Six; 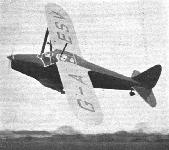 The v.p. airscrew version of the five-seater Heston Phoenix which is one of the quietest single-engined machines on the market.

LOW DRAG: Here ts the first British strutted monoplane to have a retractable undercarriage. The machine is the Heston Aircraft Company s Phoenix, and the feature, with the careful cowling of the Gipsy Six engine, gives a very "clean" appearance. 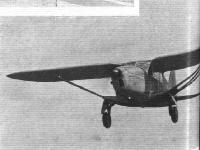 The prototype Heston Phoenix, G-ADAD, first flown in August 1935. Only six of this five-seater with retractable undercarriage were built.

Heston's Phoenix cabin monoplane of 1935 used a similar retraction layout to the Naiad and Tribian.

A side view of the Phoenix. The Titanine finish is pale green, picked out in darker green, and silver.

The Heston Phoenix with Gipsy Six engine is the centre of attraction. 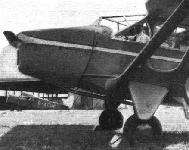 Eminently suitable for charter operation is the Heston Phoenix with a D.H. Gipsy Six engine. 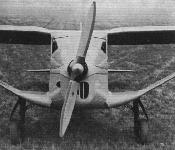 In spite of its wide fuselage, the Phoenix is very "clean." This photograph also gives a good idea of the pilot's view.

A PHOENIX FOR AUSTRALIA: Mr. C. J. Melrose with the Heston Phoenix which he is shortly flying out to Australia in easy stages. This machine is the first of the production batch and incorporates certain improvements, mainly an even better view than before from the pilot's seat and a somewhat neater Dowty retractable undercarriage. Mr. Melrose hopes to carry a few expense-sharing passengers.

HOMEWARD BOUND: C. J. Melrose, with his Heston Phoenix (Gipsy Six) photographed shortly before leaving for Australia. He had an official send-off from Heston last Saturday, Mr. C. F. G. McCann, Agent General for South Australia, and Mr. Pemberton-Billing (who is Mr. Melrose's uncle), being among the well-wishers. The fact that an extremely adverse weather report thereupon caused a postponement came as rather an anti-climax. Actually, Mr. Melrose left on Monday. He is proceeding Australiawards in easy stages, and on arrival will use the Phoenix for charter work; he will also represent the makers, the Heston Aircraft.Co. Ltd.

KEEPING ITS END UP: A small parachute is sometimes carried in the tail of a machine as a precautionary measure during spinning tests. This view shows such an installation on a Heston Phoenix. 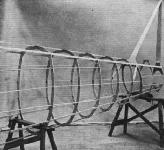 The photograph shows the skeleton of the rear monocoque fuselage. 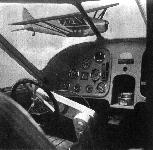 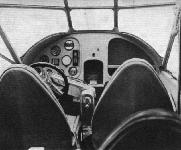 In the cabin: The instruments are grouped in front of the port seat. On the right is a large locker for maps. Note the "swing-over" control. 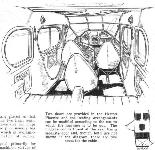 Two doors are provided in the Heston Phoenix and the seating arrangements can be modified according to the use to which the machine is to be put. The luggage compartment at the rear has a separate door and, though both are not shown in the diagram, there are two doors for the cabin. 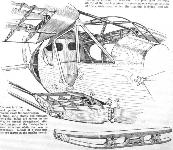 This sketch of the front portion of the Phoenix shows the construction of wing, wing stump and fuselage. The petrol tanks are carried in the wing on special strengthened ribs. The front part of the fuselage has a girder structure while the rear is monocoque. Details of a wing-stub spar are shown in the smaller sketch. 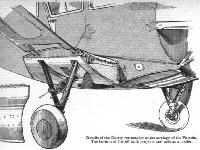 Details of the Dowty retractable undercarriage of the Phoenix. The bottom of the oil tank projects and acts as a cooler. 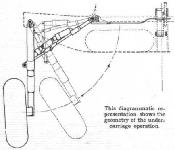 This diagrammatic representation shows the geometry of the undercarriage operation.

The cantilever tail is of wood construction, and a metal fairing (not shown) terminates the fuselage. Note the trimming "tab" on the port elevator only.