AN Avro "Baby" has recently been converted by Southern Aircraft, Ltd., of Shoreham-by-the-Sea, into a very modern light ‘plane single-seater, with a quite amazing performance. We had an opportunity, recently of inspecting and photographing this machine at Shoreham, just prior to its going away to Martlesham for type tests.
The work of converting the "Baby" has been extremely well carried out, and Mr. F. G. Miles of Southern Aircraft, Ltd., is to be congratulated upon the work. The main alterations carried out were, directly and indirectly, a result of the decision to fit an A.B.C., “Hornet" engine. This engine, being a double flat twin, called for an engine mounting and cowling totally different from that which the machine had originally, when fitted with the Green four-cylinder in-line water-cooled power plant. The difference in weight between the Green and the “Hornet” also played a part, and Mr. Miles produced the "nose" shown in the photographs, particularly in the three-quarter front view. We think it will be agreed that the “Hornet” nose is a very workmanlike affair.
To bring the machine into line with modern practice, it was decided to fit a top centre-section gravity petrol tank, and this has been done, the wings being for the rest left unchanged.
A slight rearrangement of the cockpit was also effected, notably the installation of new controls. A new tail unit was designed and made, and it will be seen that this rather resembles in general shape the tail of the Avro "Avian," so that the "Martlet," as the converted machine has been christened, still retains a good deal of the Avro "touch."
Rubber cord shock absorbers having gone out of fashion, Mr. Miles fitted a new undercarriage, in which the telescopic legs incorporate oleo gear and coil springs. This type of leg is the invention of, and has been patented by, Mr. Basil Henderson, of the Hendy Aircraft Co., also of Shoreham, but owing to certain patent considerations, we are not able at present to give a detailed description of it. That it works extremely well was demonstrated when Mr. Miles landed and taxied the machine about in very small curves at high speed.
Mr. Miles was kind enough, on the day of our visit, to take the machine up and give a most amazing demonstration of its capabilities. The take-off is extremely short, and the climb is reminiscent of a single-seater fighter. The machine does all the usual aerobatics with great facility, and Mr. Miles showed, by flying around in small circles at very low speed, that the controllability is good, even near the stall. The high speed also appears impressive, and altogether, the "Martlet" promises to be a very fine little machine for the pilot-owner who desires something "snappy." The machine is, we understand, the property of Mr. Bellairs, a director in Southern Aircraft, Ltd. Finally, it should be stated that the A.B.C. "Hornet" appears to run very well indeed, and to give ample power. The machine lands very slowly, and is exceptionally manoeuvrable on the ground, with the result that it should be easy to "put down" in almost any field. Its short run to take off, and its excellent climb, should enable it to get out also of very small fields, so that the "Martlet" may be considered a very serviceable little single seater indeed.

RECENTLY produced by the Southern Aircraft Co., Ltd., of Shoreham-by-Sea, Sussex, this is a most fascinating little single-seater.
The machine was originally designed from the Avro "Baby," and many modern features have been included. The top centre section has been redesigned to carry the fuel tank, and the tail units are entirely new. The undercarriage, which has proved very satisfactory, is a combination of oleo and coil-spring shock absorbing gear, which is the patent of Mr. Basil Henderson, of the Hendy Aircraft Co., also of Shoreham.
The Martlet was demonstrated at many meetings last year, and very greatly impressed the onlookers with its manoeuvrability; its speed range seems very large, and though its top speed, for such a machine, is very impressive, its landing speed is quite low. Control throughout the whole range is very good, and for the pilot who likes something which he can throw about after the style of a single-seater fighter, the Martlet must have its appeal. The A.B.C. Hornet engine appears to suit this machine well and to run smoothly.
It is now properly on the market, and is certainly a good type for those who want something a little different and do not mind a single-seater.

THE METAL "MARTLET"
Southern Aircraft, Ltd. have just produced a metal version of the "Martlet." Although a light 'plane and fitted with a Hermes II engine of 105 h.p. only, the metal "Martlet" has an excellent performance and should be very useful for fighter training, advanced aerobatics, sporting flying, &c.

WORKING quietly and saying little about it, Mr. Miles, of Southern Aircraft, Ltd., Shoreham, and Mr. Basil B. Henderson have been putting their heads together for some months, and have now produced a metal version of the well-known "Martlet" biplane which Mr. Miles first brought out some years ago. The original "Martlet" was something of an eye-opener in the way of performance, speed-range and manoeuvrability, and in the metal version these qualities have not only been retained, but have, in some cases, even been improved. The result is a machine which, although of low first cost and easy maintenance, gives a performance which is little short of marvellous. The metal "Martlet" has been designed for, and should be extremely useful as, a type for the training of pilots in air lighting, as the performance and manoeuvrability are such as to simulate very well the characteristics of a high-power single-seater fighter. The sturdy construction and great manoeuvrability should also make the machine very useful for training pilots at low cost in advanced aerobatics, while the sportsman who wants something "snappy" and fast, while at the same time docile when it comes to landing, should find much to appeal to him in the metal "Martlet."
Designed jointly by Mr. Basil Henderson and Mr. Miles, and built at the Shoreham works of Southern Aircraft, Ltd., the metal "Martlet" is a single-seater biplane of mixed construction, the producers having used metal only where it could be readily and cheaply substituted for wood, while retaining wooden components which would be more difficult and expensive to produce in metal.
For instance, the fuselage is a steel tube structure, the tubes being of square section, and struts and longerons being joined together by steel flitch plates riveted or bolted on. The structure has been designed to be rigid without the use of bracing wires, and there is no rigging or adjustment to be made by the user. Should a fuselage tube become damaged, it can be replaced without disturbing the rest of the structure. The main fuselage structure is enclosed in wooden fairings with doped linen covering.
The biplane, wings are mainly of wood construction, with wooden spars and wing ribs, and braced by high-tensile steel wire and streamline steel tube struts. The wings are designed to fold, and as the machine is of small dimensions, the space occupied when the wings are folded is very small indeed.
An undercarriage of the divided type is fitted, constructed of steel tubes throughout. The wheels are carried on steel forgings, and are mounted on roller bearings. Low-pressure tyres are fitted, and, as the telescopic legs of the undercarriage (of the oleo-steel spring buffer type) have a long stroke, the landing shocks are very effectively damped, while the tendency to bounce has been reduced to a minimum. The wheels are fitted with independently-operated brakes, so that not only can the machine be stopped in a very short distance, but manoeuvring on the ground is greatly assisted. A steel spring tail skid is fitted.
Very particular attention has been paid to the controls, which are effective at all speeds within the speed range, and friction in bearings has been reduced by fitting ball bearings at all important points.
Although the machine is of the vertical biplane type (to facilitate folding), the view from the cockpit is quite exceptionally good, a fact of considerable importance in a machine intended for fighter training and advanced aerobatics.
It is not desired to give very detailed data concerning the metal "Martlet" at present, but it may be stated that the disposable load is 375 lb. The top speed is about 130 m.p.h., while the landing speed is only about 40 m.p.h. The machine cruises at 115-120 m.p.h., and the cruising range in still air is 400 miles. The rate of climb at ground level is spectacular, being of the order of 1,400 ft. /min. In a flat calm the machine takes off in 60 yards, and the landing run, also in no wind, is only 70 yards. The service ceiling is about 20,000 ft.
The engine fitted is a 105-h.p. Hermes II, neatly cowled in.

Southern Martlet G-ABBN flew with National Aviation Day Displays for the 1932 season and is seen here in company with Avro 504K G-ABHI and Tiger Moth G-ABUL. G-ABBN was scrapped in 1935.

STRAINING AT THE LEASH: The line-up for the first heat of the day, at 8 a.m.

The Martlet ("Genet"). This is the only aircraft built private owners who want to stunt. It originates from Aircraft factory at Shoreham.

THE LIMIT MAN: Mr. T. C. Sanders getting away first in the King's Cup Race. His "Martlet" ("Genet") is a well-known sporting single seater.

SIDE VIEW OF THE METAL "MARTLET": In spite of the fact that the machine is a vertical biplane, the view is very good.

SCENES AT THE START: 2 - Mr. Bramson and F./O. Leech running up the engines of their Martlets. 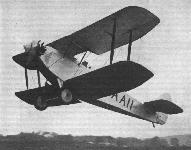 The machine doing a "zoom." 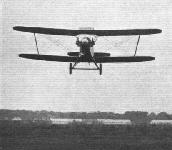 AERODROME RACING: Realising the fascination of watching aeroplanes racing around a course on the aerodrome, Sir Alan Cobham has included this item in his programme. Here are seen a Southern "Martlet" and a Comper "Swift" fighting for first place.

The circus comes to yet another town. In this formation, led by H.P. W.10 G-ABMR, are two Gipsy Moths, Comper Swift, Desoutter, Tiger Moth, Airspeed Ferry and a Southern Martlet.

AT SHOREHAM: On the left we show old and new Shoreham, in Mr. C. L. Pashley (right) - who was associated with this aerodrome in the very early days of flying and must now be not very far short of the 10,000-hours flying mark - and Mr. F. G. Miles, Managing Director of Southern Aircraft, a more recent "settler" at Shoreham. On the right we show the Mayor and Mayoress of Worthing standing beside the Metal "Martlet."

Mr. L. E. R. Bellairs, of the Southern Aero Club and Southern Aircraft Co., in the new single-seater biplane, the "Martlet," built by the company and fitted with an A.B.C. "Hornet" engine. It has remarkable manoeuvrability, lands in an extremely short distance, and shows exceptional steadiness on the ground.
<<   0/0   >>