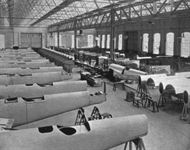 The "Bristol" Blenheim - an important factor in the National re-armament scheme - is in large-scale production, and is the standard equipment in many R.A.F. Squadrons. In design, construction and performance it is foremost among the service aircraft of its type in the world. Illustrated is a production line of BLENHEIM HIGH PERFORMANCE MEDIUM BOMBERS

A CHANGE IN CHARACTER. This is a bomber version of Italy's Savoia Marchetti S.79 high-speed commercial monoplane. Recently, flown by Major Attilio Biseo, it broke the following records: 1,000 km. with 500 kg., 100 km. with 1,000 kg. and 2,000 km. with 500, 1,000 and 2,000 kg.
Flying in formation from Dakar to Port Natal - 1,960 miles - in 8 hrs. 35 mins., three Italian Savoia-Marchetti S.79 bombers last week established a new record for the South Atlantic crossing. Two of the machines then flew straight on to Rio de Janeiro without landing, a further 1,500 miles, a feat never before accomplished. 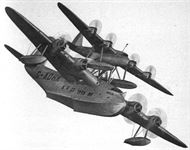 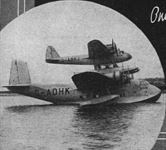 THE GREAT EXPERIMENT: This week Maia and Mercury, the two components of the Short composite aircraft, were brought together on the water for the first time. In this Flight photograph, taken last Tuesday, Mercury looks oddly small, although she is of 73 ft. span and 21,000 lb. gross weight. 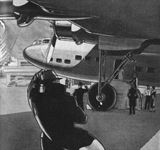 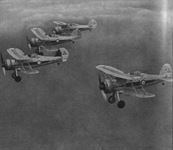 The powerful Gloster Gladiators fitted with Bristol Mercury Engines. Part of a Fighter Squadron in formation. 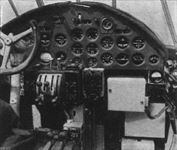 The Hoggar Rally proved another opportunity for the famous MESSERSCHMITT "TAIFUN" to show its worth by winning outright the face of strong international competition. There is really no heed for us to stress the point, since it is shown by actual facts that the "TAIFUN" is fast, smart, comfortable and extremely reliable. Can’t we tempt you to give this splen­did ship a test?