A KLM Fokker F.VII being refuelled at Croydon in 1927. It is fitted with a twisted slab dural propeller, presumably of German origin.

The smoothly-streamlined cowlings of the Supermarine S.6 concealed a 1,900 h.p. Rolls-Royce R engine, nothing is visible but the exhaust ports. Note the coarse pitch of the propeller.

Hard Work Ahead: A.V. Roe smiles philosophically in front of his early machines after a fairly typical landing - the metal paddle-bladed propeller is severely bent, but in one piece.
The "crash" was the result of outgrowing his "aerodrome," for on one occasion he remained up until the boundary line was reached, and attempting to turn resulted as shown! This machine was the forerunner of the tractor-fuselage types of aircraft which became common in subsequent years.

ON TEST: Col. Roscoe Turner and Mr. Clyde Pangborn flying the Boeing 247-D on a test flight before shipping it to this country. The machine is now at Heston.
The first Boeing 247 airliner was fitted with fixed-pitched metal propellers. The aircraft’s performance was enhanced considerably with the fitting of VP units.

Hawker High-Speed Fury with Kestrel engine and an experimental radiator installation. The two-bladed wooden propeller was characteristic of most fighters of the period. 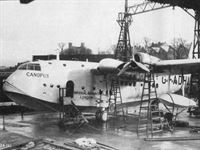 Short Empire ’boat Canopus with de Havilland bracket-type propellers. The unusual fairing at the port inboard engine position suggests a return to Rochester on three engines, with the defective one in the cabin.

An interesting attempt at a simple VP propeller was the American Everel, dubbed the "amputated airscrew". The blade was pivoted on an oblique bearing and reacted to centrifugal and aerodynamic forces to change pitch through a limited range. It could be used only on small, low-powered aircraft, like the Cub.
Like most unorthodox pieces of machinery, the Everel airscrew looks a little uncouth until one becomes used to its appearance.

The massive 68ft-span Avro Aldershot heavy bomber prototype, J6852, powered by a 1,000 h.p. Napier Cub. The man standing at right gives some idea of the size of the wooden four-bladed propellar.

Unorthodox laminated wooden propeller on an airborne plumber’s nightmare, the Sablatnig PI of 1919. 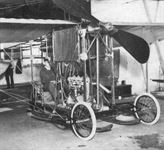 Robert Blackburn’s first monoplane, built during 1908-09. A 35 h.p. Green engine drove the 8ft 6in propeller through a reduction gear.