Photographed at Blackbushe on July 14, 1977, Doug Arnold's Junkers 52 G-BECL has now been returned to flying condition.

Visitor to the Duxford displays on June 18/19, 1977 was P-51D Mustang NL5747, flown over from the States by Robert Bladon with its owner, Mr Ostermeir, in place of the fuselage fuel tank.

After 36 years of faithful service with the Royal New Zealand Air Force, the Harvard officially retired on June 24, 1977. Of the 202 aircraft that had served with the RNZAF since 1941, 17 remained to participate in the final flypast over Wigram.

On 24th June 1977 the North American Harvard was retired from the R.N.Z.A.F. after 36 years service. Photo: W/Cdr. Don McAllister, O.C. Flying Training Wing, makes a low pass in Harvard NZ1015
Harvard NZ1015, flown by Wg Cdr Don McAllister, MBE, Officer Commanding Flying Training Wing, made a low flypast over Wigram in a salute to commemorate 36 years of service. It had the distinctive red and white cowling of the Red Checkers aerobatic team. 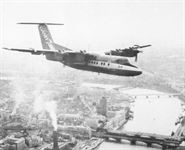 One of the visitors to the PFA Rally at Sywell on July 1-3, 1977 was Taylorcraft Plus D G-AHXE.

Another Sywell guest was Percival Gull Six HB-OFU, one of three surviving examples. It has now returned to Britain after 40 years in Switzerland.

CASA 1.131 Jungmann G-BECX, previously served with the Spanish Air Force as E3B-430. It arrived at Elstree on September 19 last year with four others, and is now the property of Neil Williams. It was photographed recently at Old Warden.