Noted Lockheed test pilot Tony LeVier at the controls of the XP-80A, the Gray Ghost over Muroc Army Air Field.

A total of 2,579 Starfighters were built and the type provided the mainstay of NATO’s air defence during the 1960s and 1970s. The first prototype XF-104 made its maiden flight on March 4,1954, powered by a Buick-manufactured version of the Wright XJ65-W-6. Production aircraft were powered by the General Electric J79. 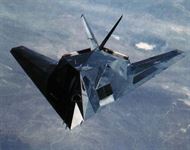 Uncompromisingly designed for stealth, the F-117A would appear to be an aerodynamicist's nightmare. However, within certain boundaries, handling is reported to be comparable with conventionally shaped attack aircraft and fighters. During Desert Storm F-117As compiled a record unparalleled in the chronicles of air warfare, achieving an 80% hit rate on pinpoint targets (1,669 direct hits, 418 misses) while destroying almost 40% of all targets attacked by the Coalition forces.

Three SR-71s are in service with NASA, including a single SR-71B trainer. This aircraft is distinguished by its elevated rear cockpit and associated windscreen.

Equipped with Hughes GAR-9/AIM-47 long-range radar guided air-to-air missiles, the three YF-12As were the only armed members of the Blackbird family to reach the hardware stage. This view of the first YF-12A clearly shows the abbreviated nose chine configuration. 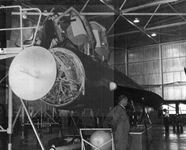 Радар AN/ASG-18 был наиболее мощной бортовой РЛС в мире
The YF-12A’s Hughes AN/ASG-18 radar was the most powerful airborne unit in the world at the time of its debut. Noteworthy are the infrared sensor system fairing balls (light coloured) housed in the chine. 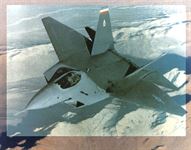 Lockheed’s Skunk Works, along with several other US airframe manufacturers, is presently exploring fighter designs, such as this advanced short take-off and landing configuration, for the 21st century. Within the next two years, the competitors will be whittled down to one and a contract will be awarded for the execution of definitive wind tunnel studies.

First flight of the prototype U-2, Manufacturer's Number 341, was on August 4, 1955, from Groom Lake, Nevada and the type is still in operational service almost 40 years on. Indeed, the concept is so unique that U-2Rs are providing intelligence information largely unattainable by other sources.

Prototype F-94C Starfire, 50-0955, was the original L-188 demonstrator with a military serial number rather than civilian registration. The Starfire was conceived as an all-weather interceptor to counter the Russian long-range bomber threat. 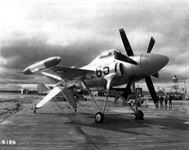 In the late 1940s both the US Navy and Air Force funded feasibility studies for a VTOL aircraft. Lockheed's response was the XFV-1 which, although produced to cost and weight was deemed to be a complete failure. The maximum speed was too low for its envisioned fighter role and more seriously, it could not be landed vertically - the pilot could not look back over his shoulder and judge the height. Transitions from forward flight to the vertical were, however, demonstrated during the test programme.

The attractive but notably unsuccessful Model 75 Saturn. This commuter airliner, designed to carry 14 passengers, was simply too expensive for the post-World War Two market.

Specified to carry a 9,000kg pay load over a range of 7,200km, the Constitution was the largest US Navy transport of its day. Unfortunately, the only two examples were not completed until some 15 months after the end of World War Two, by which time the mission had lost its priority.

Many different ‘second-generation’ U-2R configurations have been flown, including this version known as Senior Span. This particular aircraft, ‘tufted’ for air flow visualisation during flight trials, was the first to be modified with Senior Span's unorthodox dorsally-mounted data-link antenna. This permits the aircraft to relay digitised intelligence in real-time via satellite to virtually any point on earth.