Comet 1A F-BGSA of Union Aeromaritime de Transport. Delivered on December 11, 1952, ' SA was withdrawn and put into storage in April 1954 at Le Bourget. It was scrapped in 1961.

Series 1A F-BGNY of Air France at Hatfield, prior to delivery. It flew the first Air France turbojet service on August 26, 1953. DH bought ’NY back in April 1954 and it later joined the Ministry of Aviation test fleet as a Series 1XB.

THE DE HAVILLAND COMET 2 in service with ROYAL AIR FORCE TRANSPORT COMMAND js powered by ROLLS-ROYCE AVON TURBO JETS
Superb portrait of Comet C.2 XK671. Delivered to the RAF in August 1956, it served with 216 Squadron as ‘Aquila’ until September 1962 and was retired in 1966.

To test the steering, a Comet nosewheel was fitted to a converted lorry chassis with bomber (Halifax?) mainwheels to stop the unit overturning. The figure on the right, wearing the hat, is Sir Geoffrey de Havilland.

A pleased John Cunningham pops his head out of the cockpit of G-ALVG just after the first flight.

The prototype Comet, G-ALVG, in formation with the second aircraft, G-ALZK.

The prototype, G-ALVG bearing BOAC markings on the nose, arriving at Copenhagen during the record-breaking route proving runs.

Canadian Pacific’s 1A CF-CUM ‘Empress of Vancouver’ at the SBAC display at Farnborough, September 1952 with a huge queue waiting to inspect the interior. CPA did not operate the aircraft, it was passed on to BOAC in August 1953.

The prototype DH.106 under construction at Hatfield.

The Farnborough Comet 1 fuselage fails after the equivalent of 9,000 flying hours.

Famous photograph taken at Farnborough of the re-assembled wreckage of G-ALYP. 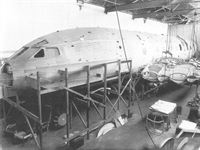 Wooden mock-up of the DH.106 at Hatfield.

Comet 3 G-ANLO in BOAC markings during its world tour of December 1955.

‘Canopus’ XS235, a Series 4C delivered to the Blind Landing Experimental Unit at Thurleigh on December 2, 1963, and later used by A&AEE Boscombe Down. It made the last flight by a Comet on October 30, 1997, into Bruntingthorpe.

Former Mexicana 4C XA-NAR is preserved at Everett, Washington State, in BOAC colours, having arrived there in January 1980.

BOAC Comets 4s in the engineering hangar at Heathrow. At the rear is Chester-built G-APDE, while in the centre is Hatfield-built G-APDB which is today preserved by the Duxford Aviation Society.

An impressive airframe from any angle, MEA Series 4C OD-ADR poses serenely for the camera prior to delivery to the Lebanon. It was destroyed on the ground in an Israeli attack on Beirut on December 28, 1968.

Series 4C SU-ALC wearing the briefly-adopted Misrair colours. Delivered to Egypt in June 1960, the airline took on the United Arab Airlines full title that December. ’LC crashed after take-off from Tripoli on January 2, 1977.

Former BOAC Series 4 G-APDE in use with Dan-Air’s Training Unit at Gatwick. It was broken up in April 1973.

King Ibn Saud’s personal transport, Series 4C SA-R-7. Painted in a spectacular colour scheme, the aircraft had but a short life, delivered in June 1962, crashing into the Italian Alps on March 20 the following year. 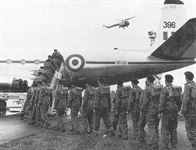 Second of the Series 4s for Aerolineas Argentinas, LV-PLM ‘Las Tres Marias’. Delivered in January 1959, it was acquired for spares by Dan-Air in 1971.

The Series 3 prototype G-ANLO prior to its first flight at Hatfield, May 1954. A Comet 3 fuselage is being moved behind it.

Comet 4 XW626 (previously BOAC G-APDS) was used as the radar and systems test-bed for the abortive Nimrod AEW.3 programme. It made its first flight with the huge nose radome on June 28, 1977, and served out of Thurleigh, where it was broken up in April 1994.

Nimrod AEW.3 XZ286 in 1978. Apart from the AEW mods, and ESM pods on the wingtips, note the main Nimrod features, the enlarged engine intakes for the RR Speys and the distinctive ‘bubble’ of the weapons bay added under the slender Comet shape.

Nimrod MR.I XV239, one for the first to be delivered to the RAF in 1969. Although altered, the Comet outline is still clear.

Avro Lancastrian VM703 with DH Ghosts fitted in place of the outer RR Merlins during early ground runs at Hatfield.