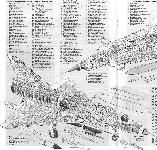 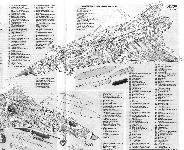 The two-seat McDonnell F-101B Voodoo interceptor, which began to enter service with the USAF in 1959, could carry two nuclear AIR-2 Genie unguided missiles intended for use against bombers, their lethal blast radius being some 1,000ft (305 m). Two inert AIR-2s are seen here on the rotary weapons bay door of the fifth production F-101B (56-236) prior to the introduction of strokes to deflect the rocket gases from the engine air intakes.

From its USAF service entry in 1951, the successive versions of the Northrop F-89 Scorpion might be said to have reflected the progressive changes in fighter armament thinking through the fifties decade, the A, B and C models each having a battery of six 20-mm cannon, the D model replacing these with 104 2-75-in unguided rockets, the H model mating 42 unguided rockets with six GAR-1 Falcon missiles and the final J model introducing MB-1 Genie nuclear-tipped missiles. The YF-89D (49-2463) is seen here firing its unguided rocket batteries

An early and widespread attempt to overcome the inadequate lethality of the gun as primary fighter armament was the unguided rocket battery coupled with collision course interception. Here, the first Avro Canada CF-100 (18101) is seen launching its starboard battery of 2-75-in folding-fin unguided rockets during trials early in 1953.

A rare air-to-air view of VX 350. The cylindrical housing projecting rearwards below the jet pipe is for the braking parachute.
The small target defence interceptor concept was destined to be overtaken by the surface-to-air missile, but at the beginning of the 'fifties, such fighters appeared to hold much promise, and the Fairey F.D.1 was seen as a basis for a fast-climbing interceptor launched from a near vertical ramp.

First flown on 19 July 1955, the Sud Ouest S.O. 9050 Trident II is seen here cruising on the power of its two 3,307lb s.t. Turbomeca Gazibo wingtip-mounted turbojets. Rocket power still provided the main propulsion for interception but was now provided by a twin-barrel SEPR 631 giving a total thrust of 6.614lb. This shift in the balance of installed power between the Trident and Trident II was clearly targeted at extending the machine's radius of action by allowing the machine to rely more on its upgraded turbojets. The Trident lI's initial climb rate of 19,685 feet per minute and high altitude capability were shown on 2 May 1958, when it set a new absolute height record of 79,452 feet. Seen here carrying a mock-up of an air-to-air missile beneath its fuselage, one of the three Trident lIs was lost on 21 May 1957 as a result of an in-flight explosion of the volatile liquid rocket fuel. This notwithstanding, neither America's Republic XF-91, or Britain's Saunders-Roe S.R. 53 mixed power interceptors ever achieved the stage of development reached by the Trident II.

Although the ramjet had fewer adherents than the rocket as a means of fighter propulsion, in combination with the turbojet it possessed its proponents in both the USA and France. In the latter, one of the leading protagonists was Jean Galtier who evolved, from the Atar 101 turbojet-powered SFECMAS 1402 Gerfaut I (on photo) the turbo-ramjet Nord 1500 Griffon II. In the event, this somewhat exotic form of fighter propulsion had fallen by the wayside by the early 'sixties.

Although the ramjet had fewer adherents than the rocket as a means of fighter propulsion, in combination with the turbojet it possessed its proponents in both the USA and France. In the latter, one of the leading protagonists was Jean Galtier who evolved, from the Atar 101 turbojet-powered SFECMAS 1402 Gerfaut I the turbo-ramjet Nord 1500 Griffon II (on photo). In the event, this somewhat exotic form of fighter propulsion had fallen by the wayside by the early 'sixties. 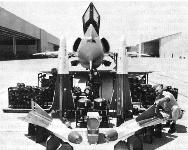 The electronic wizardry and advances in air-to-air weaponry introduced as the fifties translated to the ’sixties to increase the adverse weather capability and lethality of the fighter is symbolised by this publicity photograph of the F-106A Delta Dart with its quartet of AIM-4 Falcon missiles and array of black boxes and scanners.

The mid-fifties saw the Saunders-Roe SR.53, which mated a Viper turbojet and a Spectre rocket, and the Avro 720, with a similar turbojet and a Screamer rocket (on photo), proposed as a means of countering the advances that were being made by Soviet manufacturers in the development of high subsonic and transonic bombers.