In the wake of the Munich Agreement production of bombers for the RAF was ramped up. One of the more promising new designs was the Handley Page Hampden, which was fast, manoeuvrable and could carry a bomb-load of 4,000lb (1,825kg). The Hampden bore the brunt of Bomber Command’s early wartime raids over Germany. 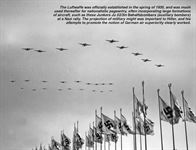 The Luftwaffe was officially established in the spring of 1935, and was much used thereafter for nationalistic pageantry, often incorporating large formations of aircraft, such as these Junkers Ju 52/3m Behelfsbombers (auxiliary bombers) at a Nazi rally. The projection of military might was important to Hitler, and his attempts to promote the notion of German air superiority clearly worked.

Originally designed to a 1934 specification for a three-seat multi-role aircraft capable of undertaking the escort and bomber interception roles, the Potez 63 formed the basis for the 633 bomber, although its load of 880lb (400kg), comprising 8 x 110lb (50kg) bombs, was somewhat feeble in comparison to those of the German bombers.

By the end of 1938 the Luftwaffe’s dive-bomber units had begun equipping with the Junkers Ju 87B, a modified development of the original A model, incorporating a Jumo 211 engine, aerodynamic refinements and a lighter, spatted undercarriage. It went on to become a potent symbol of Germany’s "Blitzkrieg” style of warfare.

A formation of six Battles photographed during the period of the “Phoney War" in November 1939.
One of the RAF’s more advanced machines in 1938, the single-engined Fairey Battle light bomber could carry twice as many bombs twice as far as the Hawker Hind it replaced. The Battle entered RAF service in May 1937, but was also - rather mysteriously - excluded from the total bomb-lift figure for the RAF presented in 1938.

The Munich Agreement was signed by Germany, France, Italy and Britain on September 30, 1938, and by the summer of 1939 the Luftwaffe was arguably the most technologically advanced air force in the world, with 11 bomber wings prepared for combat, including KG 26, formed in May 1939 with He 111Fs, as seen here that year.

The bomber that would become a symbol of German air power above all others was the Heinkel He 111, which initially had a conventional “stepped” nose arrangement, as seen here, before the much better-known, and rather more sinister, fully glazed nose was introduced on the He 111P and retained on all subsequent variants.

Крылья Heyford имели металлическую конструкцию с полотняной обшивкой, фюзеляж - металлический с обшивкой из легкого сплава и полотна, экипаж - четыре человека, шасси - неубирающееся с хвостовым колесом.
THE HANDLEY PAGE H.P. 38: This machine, produced two years ago, is still surrounded with a certain amount of secrecy. It is a night bomber with high performance, and the arrangement of the fuselage and engines is such as to provide monoplane view while retaining biplane manoeuvrability. Wing span 75 ft. Gross weight 15,600 lb. The H.P. 38 will be seen at Hendon on June 25.
Also designed to Specification B.19/27, the Handley Page Heyford was the last of the RAF’s biplane heavy bombers, and entered service with No 99 Sqn in November 1933. Despite being capable of uplifting a meaningful bomb-load of some 3,500lb (1,585kg), the Heyford (along with the Hendon) was discounted as “operationally useless”.

The sleek state-of-the-art Dornier Do 17 entered Luftwaffe service in early 1937, the first production model being the Do 17E, as seen here. This variant carried a standard load of 1,100lb (500kg) of horizontally-stored bombs, which could be increased to 1,650lb (750kg), but - crucially - the latter only for reduced-range sorties.

The unusual single-engined Vickers Wellesley, incorporating extremely high-aspect-ratio wings, entered RAF service with No 76 Sqn in April 1937. Capable of carrying a bomb-load of 2,000lb (910kg), the type served with ten squadrons at home and overseas, including No 148 Sqn, with which this example, K7717, served during 1937.

The first prototype of the Junkers Ju 86 made its maiden flight on November 4, 1934, and was unusual in that the type was designed from the outset to be powered by a pair of 600 h.p. Junkers Jumo 205 diesel engines, as seen fitted to these Ju 86Ds of 4./KG 253. Other variants of the Ju 86 were fitted with BMW 132 radial engines.

Stylistically and technologically falling somewhere between the lumbering but capacious Amiot 143 and the more refined but less capable LeO 45 and Potez 633 was the Bloch MB.210, the prototype of which made its first flight in November 1934. At a maximum of 3,520lb (1,600kg), the MB.210’s bomb-load was impressive.

The graceful LeO 45 is in quantity production for the French Air Force. It makes use of the new Mercier low-drag cowlings. A machine of this type is to be fitted with Bristol Hercules engines.
Rather more up to date was the Liore et Olivier LeO 45 twin-engined medium bomber, the prototype of which is seen here. With the replacement of its original Hispano-Suiza engines with Gnome-Rhone 14Ns, the type was designated LeO 451 and entered service in 1939. The type’s standard bomb-load was 7 x 200kg (440lb) bombs.

In common with the Armee de I’Air’s Amiot 143, the Fairey Hendon was largely designed to a late-1920s specification, in the latter’s case B.19/27 for a “Night Bombing Landplane”. The Hendon became the first all-metal low-wing cantilever monoplane to join the RAF when it entered service with No 38 Sqn at Mildenhall in late 1936.