Three Messerschmitt Bf 109E-7s were imported into Japan and tested extensively by both the IJAAF and the IJNAF. One of the Navy test pilots stated that he found the Bf 109’s cockpit narrow and cramped, although its acceleration in a dive was exceptional. Unsurprisingly, of the German fighters tested by Japan, the Fw 190 was deemed the best.

The sole Focke-Wulf Fw 190A-5 imported into Japan arrived in the late summer of 1943 and was tested against Japanese fighters at Fusa airfield, near Tokyo. It was highly rated by test pilots, but was not selected for production in Japan

An original Japanese technical document, dated September 1, 1942, detailing the results of a series of airframe vibration tests of one of the three Heinkel He 100D-0 sentoki (fighter) aircraft delivered to Japan in May 1940. The blisteringly fast Daimler-Benz DB 601-powered He 100 became the inspiration for Japan’s Kawasaki Ki-61 Hien fighter. 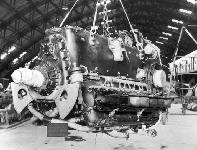 Based on the DB 601 that powered a number of Germany’s wartime aircraft, the 1,100 h.p. Kawasaki Ha-40 12-cylinder liquid-cooled supercharged direct-fuel-injection engine was used to power the IJAAF’s Ki-61 Tony fighter. Liquid-cooled engines were not favoured in Japan, the vast majority of its fighting aircraft being fitted with more rugged radial engines.

Three Messerschmitt Me 210A bomber-destroyers were supplied to Japan for evaluation. This example, WNr 2350, was brought up to Me 410 standard while still retaining the 210’s original DB 601 engines, which were replaced on the 410 with more powerful DB 603s.

One of Germany’s most dramatic and potentially significant wartime developments was the Messerschmitt Me 163 rocket-powered interceptor, which the Japanese understood could be of immense value against the waves of USAAF B-29 bombers pummelling Japan from mid-1944.

The original plan had been for Japan to manufacture both the Messerschmitt Me 262 and Me 163B and their powerplants under licence - but, when the bulk of blueprints and technical details sent by submarine from Germany were lost at sea, the Japanese were forced to come up with their own design, the Mitsubishi J8M/Ki-200.

The Japanese Toku-Ro 2 bipropellant rocket engine, based on the German HWK 509A, was capable of some 3,300lb (1,500kg)-thrust, but was too late to have an impact on Japan’s war effort.

The MXY8 was a training glider version of the rocket-powered J8M. The prototype J8M1 crashed on its first flight on July 7, 1945.

Also based on a German design - the BMW 003A - the Ishikawajima Ne-20 was Japan’s first turbojet powerplant, and was intended to power the twin-engined Nakajima Kikka and later variants of the Yokosuka MXY7 Ohka (Cherry Blossom) suicide aircraft.

Although broadly similar in configuration, the Nakajima Kikka had none of the aerodynamic finesse of its inspiration, the larger Messerschmitt Me 262. Completed in August 1945, the prototype made its maiden flight on August 7; one more flight was attempted (but aborted on take-off) before Japan's surrender on August 15. 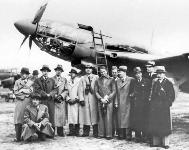 Impressed by the unusually configured Heinkel He 119’s high speed and long range, the Japanese sent a team of nine technicians from the Naval Air Technical Arsenal at Yokosuka to the Heinkel factory at Marienehe to study the aircraft. Two examples were sent to Japan in May 1940 for testing.

One of the types demonstrated to the Japanese delegation at Rechlin in June 1944 was the turbojet-powered Arado Ar 234B, two prototypes of which were put into service as high­speed reconnaissance machines that July.