A rendering of the NH90 TTH TFRA Standard 2

2Excel Aviation/Oil Spill Response Boeing 727-2S2F(RE) G-OSRA makes a pass down the runway at RAF Valley, Anglesey, on October 11, 2020 spraying fresh water over data collection points on the ground as part of a trial. The aircraft made a series of 12 passes, carrying out spray runs at heights down to about 150ft to measure and optimise the performance of the recently installed TERSUS spray boom nozzles

An MQ-9 at Creech AFB. The US Air Force wants to start replacing this type from 2030 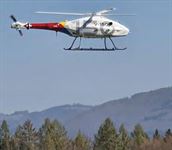 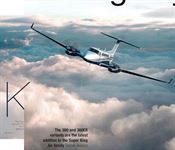 The 360 and 360ER variants are the latest addition to the Super King Air family
Compared with the King Air 360, the 360ER has extended-range fuel tanks and strengthened landing gear, to accommodate its increased take-off weight. More than five decades since the original King Air 90 first flew, the 360ER is a thoroughly modern machine

An artist’s impression of the ACJ TwoTwenty, the recently launched VIP version of the A220-100

The fifth Gulfstream G700 during its maiden flight on October 23, 2020

Initial CH-53K delivery is due in nine months

The first prototype Loyal Wingman taxiing under its own power on October 18, 2020 during testing prior to its maiden flight

The Cessna 337-based Cassio 1 testbed during its maiden flight on October 11, 2020 after installation of the new hybrid-electric powertrain designed for the ten-seat Cassio 600

An impression of the production configuration for VoltAero's Cassio family aircraft, which was unveiled on May 7 this year.