Mosquito N9919F was photographed at Prestwick in June en route for the U.S. where it will be operated on survey duties by Trans-World Engineering Inc. Colour scheme is dark blue with yellow fuselage flash and registration. Former serial was VR794.

CHANCE-VOUGHT XF8U-1. Latest machine from the Chance Vought stable is the XFBU-1, which differs considerably from its predecessor, the Cutlass. The XFBU-1 has been designed to meet a naval specification calling for a supersonic interceptor with high rate of climb and especially good performance at high altitudes. i.e. above 50.000 ft. Wing area is more generous than on most of the current crop of U.S. fighters. The armament consists of four fuselage-mounted cannon and a rocket tray. Guided missiles may also be carried under the wings.
Salient features: The long fuselage of the XFBU-1 has little taper, and the intake of the chin type with small scanner above it is particularly noticeable. The cockpit with clamshell hood is completely faired into the fuselage top-line. The iet pipe for the J57 is large, and armament blisters on the fuselage sides are to be discerned. Wings have sharp sweepback on the leading edge and square-cut tips, while a "saw-tooth" is incorporated in the wing leading edge. The all-moving tailplane has sharp sweepback and is set on the fuselage centre-line, while the tall fin is reminiscent of the Super Sabre. Main undercarriage legs retract into the fuselage sides, and the nosewheel backwards.

CHANCE-VOUGHT XF8U-1. Data: Manufacturer: Chance Vought Aircraft Inc., Dallas, Texas. Power: one Pratt and Whitney J57-P-4 of about 10.000-lb. thrust dry. Accommodation: single-seat. No other data available for publication. This silhouette is strictly provisional: it has been prepared from the only photographs available.

SCOTTISH AVIATION TWIN-PIONEER. First flown on 25th June the Twin Pioneer is an attempt to produce a tough, multi-purpose feeder-liner or military aircraft able to operate into or out of small fields. Started as a private venture and later given some official support, the Twin Pioneer incorporates many of the features proven on the Pioneer 2. Originally intended to have a single fin, the prototype has now appeared with triple fins.
Salient features: A high-wing monoplane, the Twin Pioneer has slab-sided, flat-bottomed fuselage with blunt nose and stepped cockpit. There is marked upsweep on the rear fuselage. The wings have rectangular outer sections while the inner sections have taper on the trailing edge. The radial engines are underslung and the nacelles do not extend beyond the trailing edge. The wings have large high-lift flaps and leading-edge slots along the outer sections. Main undercarriage legs are connected to the fuselage by triangular stub wings. Braced struts extend from the undercarriage legs to the outer wing sections. The main legs each carry twin wheels and there is a fixed tailwheel. In addition to the central fin , there are twin oval end plate fins. 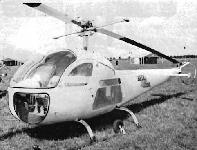 Newest version of the well-known Bell Model 47 is the streamlined 47H, demonstrated during the Paris Show for the first time in Europe.

Photographed at Copenhagen airport (Kastrup) by reader Kurt Birlie, this PV-2 Harpoon of the French Navy carried the registration F-YCKA.

FAIREY F.D.2. The Fairey F.D.2 originally started life as a subsonic test-bed, but rapid general progress called for its redesign to undertake supersonic trials. Nothing is known of the nature of these trials, but it has been rumoured abroad that they concern British heavy bomber development. Tail-less and with an extremely thin delta wing, the F.D.2 flew for the first time on 6th October last. The Rolls-Royce Avon with afterburner is housed in the rear fuselage section, and the nose can be dropped like a drawbridge for better pilot view on the approach.
Salient features: The F.D.2 is characterised by a very long fuselage with a nose probe, and little or no taper on the rear section. The cockpit is only slightly stepped and the hood is mainly of metal. The wings have sharp leading-edge sweep, square-cut tips and bulged intakes in the leading edge for the Avon. The mainwheels retract sideways and are housed under long bulges in the wings, while the nosewheel retracts backwards. The fin has sharp sweep on the leading edge and at the base is a bullet fairing for the anti-spin or brake parachute.

The Nord 3200 two-seat trainer on order for S.A.L.S. training schools. Power is a 160-h.p. SNECMA Regnier engine. Although the figures No. 01 appear on the fin, this is not the first prototype, which was registered F-WGVL and had a 170-h.p. engine.

The Fuji LM-1 Nikko, a 4-place liaison plane modified from the Fuji Beech Mentor trainer which Fuji Heavy Industries (formerly Nakajima Aircraft Co.) is assembling under licence for the Japanese Air Self-Defence Force, completed its maiden flight on 6th June 1955. It is expected that about twenty-seven LM-1 Nikkos will be ordered.

The Stampe Renard S.R.7 built in France as the Farman Monitor III. The fuselage of the old S.V.4 biplane is used, together with a 180-h.p. Cirrus Bombarder engine.

Another unusual visitor to this country was this Czechoslovakian Zlin 22 which came into Croydon at the end of June 1955.

GLOSTER GORING. The Goring was a private venture to replace the Hawker Horsley, then (1927) in service as a light bomber with the R.A.F. The Air Ministry intimated, however, that the engine they would like to see installed was the Bristol Orion fitted with an exhaust-driven supercharger. Accordingly, one Goring airframe was so equipped, but due to the failure of the Orion and its supercharger, this particular variant was not proceeded with. Another Goring, powered with a Bristol Jupiter 8-geared engine, met with very much more success.
As a bomber, the Goring carried 700 lb. of bombs; in addition, the observer had a Vickers machine-gun carried on a rotating mount in the rear cockpit, and provision for a second gun firing through the bottom of the fuselage. In this condition the Goring had a duration of 6 1/2 hours at 15,000 ft. At a later stage the Goring was converted into a twin-float seaplane, still powered by a Jupiter 8. This decreased the maximum speed by only 4 m.p.h. and made similarly small alterations to performance figures of the land plane. The floats were of Gloster design and were made entirely of anodised duralumin . Unfortunately. the Goring was never accepted as a production aeroplane, and although this second aircraft was taken over by the Ministry for research work in connection with engines, the type was not ordered into production. Span 42 ft.; gross weight 5.400 lb.; max. speed 123 m.p.h.