Delivered at the end of 1955, Egypt’s Il-28 twin-jet bombers were deployed to three units, Nos 8 and 9 Sqns based at Inchas, and the Il-28 Operational Training Unit at Luxor. This unidentified example was photographed at Almaza in 1957 during an exhibition celebrating the 25th anniversary of the formation of the Egyptian Air Force.

MiG-15bis serial “1972” was one of 64 of the original 80 examples still in operational service with the EAF in October 1956, about half of which were serviceable on the outbreak of hostilities. All were left in natural metal and carried roundels in six positions as well as black stripes around the rear fuselage and inboard of the wingtips.

Three of the EAF’s newly-operational Czechoslovakian-built MiG-15s overfly Cairo during a demonstration of Egyptian air power in September 1956. A dozen of No 1 Sqn’s recently-introduced fighters provided the Egyptian public with a view of their nation’s state-of-the-art front line of defence.

A poor quality but rare photograph of EAF pilots running to their MiGs during a scramble in early October 1956. The MiG-15bis was an improved version of the original MiG-15, incorporating an uprated engine and a strengthened structure to permit higher speeds.

Egyptian ground staff manoeuvre a highly realistic wooden MiG-15 decoy into a badly damaged hangar at an unidentified air base in Egypt during the Suez conflict. Scores of these convincing mock-ups were destroyed by French and British pilots, who would return to base claiming to have despatched rows of neatly parked MiGs.

By early October 1956 the first batch of MiG-17Fs had been delivered to Egypt and rushed into service with No 1 Sqn at Almaza. Although only six EAF pilots had converted on to the type (a substantially improved MiG-15 with an afterburning engine) by the outbreak of the Crisis, they flew numerous combat sorties during the conflict.

Vampire FB.52 “1522” was built by de Havilland and given standard EAF markings. Note the last two Arabic numerals of the serial repeated on the nosewheel door. By 1956 most EAF Vampires were fitted with launch rails for 3-5in Sakr unguided rockets.

One of the 12 Sea Furies delivered to Egypt in 1950-51, this particular aircraft having been used in an attempt to establish a new London-Cairo record in February 1950.
In early 1950 the EAF received a total of 12 denavalised Hawker Sea Fury FB.11s, diverted from production for the Fleet Air Arm. This example, serial “703”, set a speed record on its ferry flight from Blackbushe in the UK to Almaza, near Cairo, in February 1950, Hawker’s Assistant Chief Test Pilot Neville Duke taking 6hr 32min 10sec. 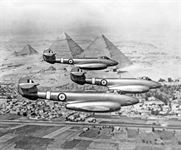 The Egyptian Air Force was the first Middle East air arm to operate jet-powered aircraft, Gloster Meteors forming a considerable part of its early jet fighter force. The first of its F.4 variants, a trio of which is seen here over the Pyramids of Giza, was delivered to Cairo at the end of October 1949.

Adorned with the black and yellow “Suez stripes” painted for identification purposes on British and French aircraft during the conflict, seven English Electric Canberra B.6s of No 12 Sqn RAF await the next political move at RAF Luqa on Malta in late September 1956. The aircraft would take part in the Anglo-French Operation Musketeer a few weeks later.

The only combat aircraft in EAF service to wear camouflage during the Crisis were the five Meteor NF.13s still in service with No 10 Sqn at Almaza, including “1428”, as seen here. The nightfighters were painted in Medium Sea Grey and Dark Green and wore the standard roundels and fin flashes, but no fuselage or wingtip black stripes.

Squadron Leader Shalabi el-Hinnawy, Commanding Officer of No 1 Sqn EAF during the Crisis, was the leading Egyptian fighter pilot of the conflict, and is seen here in the cockpit of one of the 12 Meteor F.8s delivered to the EAF in the early 1950s. He would go on to become the Commander-in-Chief of the Egyptian Air Force during 1967-69.