The Westland P.V.6
A New General Purpose Aircraft which is the logical development of the famous "Wapiti" and has its wings interchangeable with it. The performance is, however, much better. The Engine is a Bristol "Pegasus” M 2

NOT only is there an insistent and increasing demand for aircraft designed to fulfil a number of different functions, but also the performance asked and the load to be carried increase constantly. The aircraft designer who would succeed is thus compelled to produce something rather exceptional. Recently the Westland Aircraft Works, of Yeovil, have introduced a new type in the "General Purpose" class, the P.V.6. This machine has a quite remarkable performance, and is also noteworthy for the fact that it is one of the first, if not the very first, aircraft to be equipped with the new Bristol "Pegasus" engine, an article on which begins in the present issue.
The P.V.6 has more than a passing likeness to the famous "Wapiti," and resembles that machine in more than superficial outlines, the main structure being of the same type. The extra performance has been obtained by a general "cleaning up" of the design. For instance, the decking over the cockpits and forward portion of the fuselage has been given tumble-home sides, which also has the effect of improving the view. The forward portions of the fuselage side fairings are now curved so as to house the fixed machine gun and its mounting, as well as the elevator control cranks and cables. The sides in front are in the form of detachable panels, which can be quickly removed for inspection of structure and equipment, etc., while on the rear portion the fabric covering is fitted with "Zipp" fasteners so that this also can be easily inspected.
An undercarriage of a type different from that of the "Wapiti" has been incorporated, and is of the "split" type, the oleo leg being also of an improved design giving excellent action. Wheel brakes are fitted, and a tail wheel supplants the tail skid of the "Wapiti."
The wings, struts, centre section and tail surfaces are interchangeable with those of the standard "Wapiti," and are stressed to take a maximum aerobatic load of 5,500 lb. For special purposes the aircraft can be flown at an all-up weight of 6,500 lb., and can thus be flown for distances up to 1,000 miles (1,600 km.) when fitted with extra tanks. With normal tankage a widely differing assortment of bombs can be carried, up to the maximum permissible load. Very simple bomb releases make it possible to drop the bombs either in series or in salvo.
The armament consists, in addition to the bombs, of two machine guns, a Vickers fitted with interrupter gear and used by the pilot, and a Lewis gun mounted on a Scarff gun ring and operated by the observer. The Vickers gun is mounted inside the side fairing.
The Bristol "Pegasus" M2 engine is so mounted as to be readily accessible, ample space being left between the back cover of the engine and the fireproof bulkhead, while the side panels of the fuselage at this point can be quickly removed. An inertia starter is fitted, the crank being normally operated by two men, although, if necessary, one man can start it. Provision is also made for the R.A.E. gas starter to be fitted.
As the photographs show, a somewhat elaborate Townend ring is fitted, and doubtless this has contributed materially to the good performance of the machine. The ring can be readily removed from the engine after releasing two fasteners on the cowl.
The diagrams on this page show some of the purposes for which the P.V.6 can be used. Photography, Army Cooperation, Picking up Messages, Wireless, Reconnaissance, Bombing, Long-distance Reconnaissance (when fitted with special tanks), Dual Instruction, Offensive and Defensive Fighting, and Seaplane Work are some of the many classes of work for which the P.V.6 can be used, and its high performance, coupled with the considerable load carried, should ensure for it a popularity comparable with that enjoyed by the "Wapiti" for a number of years. Actual performance figures may not be quoted, but the makers inform us that the speed is surpassed by the very latest highly specialised fighters and day bombers only.

FOR many years the Westland Aircraft Works, which are a branch of the very old firm of Petters, Ltd., have concentrated largely on general-purpose aircraft, and the "Wapiti," which is so far the most famous of these, has been supplied to the British Royal Air Force, the Royal Australian Air Force, and the South African Air Force in numbers exceeding 500. However, all good things must come to an end, and even the "Wapiti" could not last for ever. Realising this, the Westland designers set to work to produce a successor, in which should be incorporated all such improvements as the vast experience accumulated with the "Wapiti" at home, in Iraq and in India had suggested. The result has been that before the "Wapiti" has become obsolete the Westland Aircraft Works already have the "next step" in production, largely due to the foresight of the firm's managing director, Mr. Bruce.

Originally produced as a "Private Venture," and known as the P.V.6, the "Wallace" is, like the "Wapiti," a type which lends itself to use in a great variety of military operations, and is thus truly a general-purpose machine. Its adoption makes for national economy, since the machine can undertake a wide range of duties which would otherwise have to be catered for by numbers of specialised types. Designed primarily for the Bristol "Pegasus" engines, the "Wallace" can be fitted with any other radial engine of comparable power and weight. The machine is, of course, of all-metal construction, with square tube fuselage and steel structure biplane wings of equal span and chord, and with two-bay bracing arrangement.
Aerodynamic efficiency is increased by fitting a Townend ring over the engine, and "spats" over the wheels. Performance figures may not be published, but the "Wallace" is a considerable improvement on the "Wapiti" in speed and climb, while still carrying the great military loads demanded of general-purpose aircraft.
To add to its versatility, a twin-float undercarriage has been designed for the "Wallace," the float undercarriage being interchangeable with the wheel undercarriage. And finally the machine can be fitted with a ski undercarriage, so that it can be operated from snow-covered ground, frozen lakes, etc.
Few data relating to the "Wallace" may be published, but it may be said that for "normal" certificate of airworthiness the gross weight may be as high as 6,300 lb. (2 860 kg.), while for "aerobatic" certificate of airworthiness the maximum permissible weight is 5,650 lb. (2 565 kg.). By fitting extra petrol tanks under the lower wings the range of the "Wallace" can be increased to 1,000 miles (1 610 km.).

This is one of the two Westland machines which flew over Mount Everest during the Houston-Everest Expedition. The machine was originally designed as a military type to carry a light torpedo, but was modified for the expedition. The engine is a Bristol 555-h.p. "Pegasus," and the wing span of the machine is 46 ft. 6 in.

Restored by Skysport Engineering over the last 7 years, the RAF Museum’s Westland Wallace II K6035 is now on show at Hendon.
PV-3

Westland PV-3 G-ACAZ used by the expedition. The picture shows the aircraft in its original state, with open cockpit and Jupiter XFA engine.

Westland PV-3 G-ACAZ used by the expedition. The picture depicts the aircraft after conversion to Houston-Westland standard.

The remodelled Westland PV-3, G-ACAZ, during a flight from Yeovil early in 1933.

The Westland PV-3, G-ACAZ, in which Lord Clydesdale flew over Mount Everest on April 3, 1933. The aircraft was exhibited at Selfridges in July 1933. 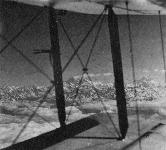 Everest and Makala from the south west as seen from one of the expedition’s aircraft during the second flight over Everest on April 19, 1933. 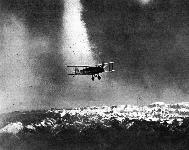 Westland Wallace G-ACBR before use on the Everest flight, as the Westland PV-6

THE P.V.6: As a result of generally clean design, drag-reducing cowling, "spats" over the wheels, and other refinements, this new Westland machine, which is fitted with one of the new Bristol "Pegasus" engines, has a very good performance.

THE WESTLAND P.V.6: The three-quarter front view shows the machine to have a strong family resemblance to the "Wapiti." Note the low-drag cowling over the Bristol "Pegasus" engine.

A PRIVATE VENTURE: The Westland "P.V.6" ("Pegasus") is a general purpose aircraft.
Wallace

Transparent wind screens have been used with good results on a Westland "Wallace." Both pilot's and gunner's coupes can be either fully closed or fully open, according to the conditions encountered. The gunner's hood, when closed, still leaves him complete freedom for bombing, wireless, etc.

Westland Wallace G-ACBR after use on the Everest flight, after conversion to standard Wallace for the RAF as K3488. 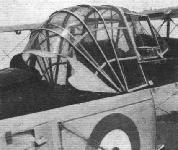 The cockpits of the Westland "Wallace" are protected by folding transparent hoods. 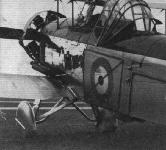 A large number of "Wallaces" with enclosed cockpits are under construction at the Westland works.

Hand-in-hand: The Westland "Wallace" and Hawker "Hart" during the refuelling demonstration. The pipe is just being drawn on board the "Hart." 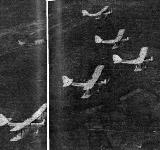 Formations of No. 504's "Wallaces" flying over their home city of Nottingham.

The Westland "Wallace" is fitted with the 555 h.p. Bristol "Pegasus IM3" respectively. 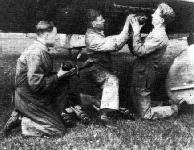 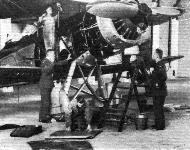 One of Halton’s busy hangars, with Westland Wallace K5081 /774M in the distance. 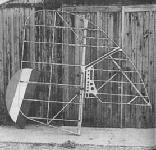 The fin and rudder of Skysport’s Westland Wallace replica - with a Sopwith Pup rudder behind it to give an idea of its impressive size. 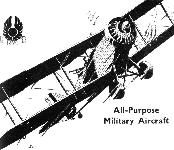 GENERAL PURPOSES: Some of the many functions of the P.V.6 illustrated diagrammatically.
<<   0/0   >>