After the withdrawal from service of the last Boeing 707 Tanker transport on September 27, 2016, the Hercules of 312 Escuadron have become the only Ejercito del Aire aircraft capable of air refuelling.

In 2006 356 MTM painted C-130H 752 with this paint scheme showing the mythological Hercules of ancient Greece. The scheme won first prize for the best painted aircraft at that year’s Royal International Air Tattoo.

Dutch C-130s regularly train for dirt strip operations during exercises, as illustrated by G-988 on the unpaved runway at Ablitas near Zaragoza in Spain during a European Air Transport Training course.

A RNLAF C-130H seen practicing low-level tactical flying while on a training mission from Zaragoza Air Base in Northern Spain.

The six surviving C-130Es were re-engined with more powerful Allison T56 powerplants, becoming C-130H standard. C-130H 309 is seen departing Hatzerim Air Base with the aid of JATO bottles during the annual graduation event staged in July 2016.

C-130H serial 314 fitted with the small passive direction finder on the nose, simplistic electronic intelligence collection system on the rear fuselage, the unknown antenna on the propeller stripe, as well as the large blade aerial above the fuselage. Note the sign by the access steps, no doubt warning restricted access. The aircraft is seen at Nervatim in October 2012.

C-130H 314 landing at Nevatim Air Base. The aircraft features three of the latest external sensors. The small silver bar antenna on the forward fuselage is believed to be a passive direction finder for ground emitters.

Another small sensor, this one mounted across the propeller line on the lower forward fuselage. The purpose is unknown.

Unusual for an Israeli C-130H, serial 208 does not feature any external enhancements, not even a FLIR turret beneath the nose. This was one of the four aircraft involved in the Entebbe mission to rescue Jews held captive by terrorists in Uganda.

For tactical missions Dutch C-130s can be fitted with an ALQ-131 (V) jamming pod on the outer pylon of each wing, as seen on G-781. Also note the wing tip-mounted sensor pod of the electronic warfare system, which is permanently fitted to Dutch aircraft.

C-130H G-781 is one of two additional aircraft that entered service in 2010. It is seen here during a tactical mission, hence the two ALQ-131(V) jamming pods under the wings and the cartridge-filled chaff and flare dispensers. 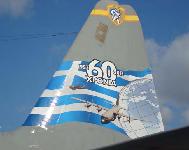 On December 19, 2013 356 MTM ‘Hercules’ at Elefsina Air Base held an anniversary on its 60 years of constant service to the Hellenic Air Force.

Paratroop drops for the Hellenic Army School of Paras at Megara are one of numerous roles carried old by the Hellenic Air Force’s Hercules fleet.

Although no details have been made available it is suggested the antenna attached to the rear fuselage is a simplistic electronic intelligence collection system. Mounted beneath the covers are three different sized antennae which monitor distinct frequency ranges.

C-130E 304 which has been derelict at Tel Aviv’s Lod Air Base for many years was put up for sale in March 2009, but there was no interest. When the Israel Air and Space Force relocated transport assets to Nevatim Air Base, the unsold C-130Es were abandoned.

C-130H 316, landing at Tel Aviv’s Lod Air Base in May 2008. Visible beneath the forward fuselage are a pair of square blade receivers on either side. It is likely these were associated with a simplified signals intelligence-gathering function.

A small T-shaped antenna, attached to the forward fuselage. All older C-130Es (now Hs) have this fitment, along with most of the H models. It is possibly a passive direction finder for ground emitters. The antenna can be removed.

Soldiers of the 11 Air Manoeuvre Brigade egress from a RNLAF Hercules during a combined army-air force exercise at the disused Twenthe Air Base. 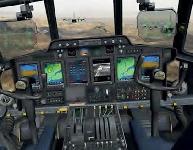 As part of the upgrade, the older Israeli C-130Hs are having the cockpit modernised, with digital displays, and a head-up-display. The two aircraft are depicted during a low level training mission.

The electronic flight instrumentation system includes several functions designed to improve a crew’s situational awareness. For example one of the CDUs can show a weather radar, which shows different colours highlighting danger areas for a crew to avoid. Cumulonimbus clouds are shown in red or magenta.

The AUP has introduced a Rockwell Collins FMS-800 Flight Management System into the cockpit. Each pilot has two MFD-255 liquid crystal display CDUs.

Firepower is at the heart of the AC-130U’s missions. The aircraft’s highest calibre weapons are a 40mm Bofors gun (left), and a 105mm M102 howitzer.

The flight deck of an AC-130U is a mix of analogue and digital instruments.

On the left side of the AC-130U’s flight deck is a head-up display used by the pilot to acquire and fire at the targets.

Air refuelling of an Ala 15 EF-18M from an Ala 31 KC-130H - periodically this type of training is undertaken with fighter units and with the Armada.

Since its entry into service the Hercules of Ala 31 have undertaken more than 197,500 flight hours flying all types of airlift and air refuelling missions.

External modifications to the EC-130J include underwing blade antennas and pods housing antenna arrays on the outer stations, a large air inlet on the left hand side of the fuselage for cooling and, most noticeable of all, the tail-mounted antenna array.

Former C-130H, and now believed to be one of two EC-130Hs, serial 435 is seen landing at RAF Brize Norton in May 2014 on a flight from the USA back to Nevatim Air Base. The aircraft has a host of enhancements, including numerous missile and radar warning receivers, including some installed to a horizontal extension aft of the fin. The aircraft is capable of being air refuelled, using the flying boom system, with the appropriate receptacle mounted above the cockpit. Small black and white telemetry marks are painted in many places, possibly in connection with air refuelling tests.

Israel inducted its first Lockheed Martin C-130J-30 Shimson (Samson) 661 (c/n 5723) into service at Nevatim AB on April 9, 2014. The transport will enter service with 103 ‘Elephants' Squadron, which was re-formed in December 2013. Crews have trained in the United States and Italy. The first C-130J-30 for Israel was ordered on April 30, 2010, and first flew on April 18, 2013, before being handed over on July 26. The transport departed Marietta, Georgia, on April 4. Contracts for up to five others have been placed and additional deliveries are due in July and during 2015. 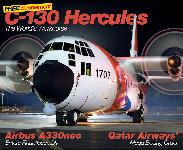 After the withdrawal from service of the last Boeing 707 Tanker transport on September 27, 2016, the Hercules of 312 Escuadron have become the only Ejercito del Aire aircraft capable of air refuelling.

Air refuelling of an Ala 15 EF-18M from an Ala 31 KC-130H - periodically this type of training is undertaken with fighter units and with the Armada.

In order to undertake low speed air refuelling missions Ala 31 has just modified two existing sets of refuelling pods with special kits. This view shows the new storage tunnel where the new drogues are stowed; these are larger then than ones used to refuel fighters.

KC-130T-30 BuNo 164397/RU is one of two dash 30s assigned to VR-55. The aircraft is seen on the taxiway at Naval Air Station Point Mugu after a local training mission.

C-130H serial 436, which has been modified to KC-130H standard, and is one of five Hercules tankers in Israeli service. This is the only Israeli C-130 fitted with a probe for air refuelling. It is seen at Radom Air Base Poland in September 2015.

“Tractor ready to roll”. Tractor is VR-55’s radio call sign used when flying local training missions around Point Mugu. In the case of this flight, multiple aircrew were maintaining take off, landing, and missed approach currencies during a drill weekend.

Since its entry into service the Hercules of Ala 31 have undertaken more than 197,500 flight hours flying all types of airlift and air refuelling missions.

An MC-130H Combat Talon II, assigned to the 1st Special Operations Squadron based at Kadena Air Base, Okinawa, Japan, makes a low pass before dropping a container delivery system over Malemute drop zone at Joint Base Elmendorf-Richardson.

A C-130 pilot tests the flight helmet and oxygen mask in Ala 31’s life support shop. 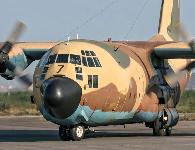 The Ejercito del Aire has ten C-130s in service.

For six months as part of Operation Unified Protector the Ejercito del Aire maintained its Detachment Argos at Cerdeha. The Ala 31 KC-130H transferred a total of 1,291,480 litres of fuel. 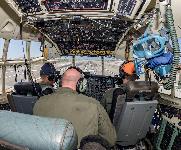 This aircraft had recently recently returned to VR-55 from the Ogden Air Logistics Complex at Hill Air Force Base, Utah following an extensive maintenance period and repaint. Upon return to the squadron at Point Mugu sailors conducted their own inspection of the aircraft.

Two crewmembers look out for any irregular activity in the Pacific waters surrounding Oahu, Hawaii.

CG 1703 on approach to Lanai, the only airport serving the island of Lanai and which provides excellent training for the Coast Guard crews due to small number of air traffic movements.

A Coast Guard HC-130H Flight Navigator at his station prior to engine start.

Apart from undertaking 20 hours annually in the simulator belonging to the CAE Training Center in Brussels Belgium, student pilots have a tactical training simulator at Zaragoza.

The cockpit of Spanish C-130Hs and KC-130Hs was updated in the late 1990s, with the introduction among other improvements of four display screens supplied by Allied Signal and two new mission computers.