An F 17 A 32 shows off its distinctive shape at low level.

An 'Electric' Lansen - J 32E - with various aerials on the airframe.

US-registered N4432V, one of the three A 32As sent over to the USA in exchange for a Spitfire.

From time to time different camouflage paintings were tried, like on this S 32C.

A pair of A 32s from F 14. In January 1956, it was decided that aircraft would carry olive green upper surfaces and an unpainted belly. The Wing number was carried in yellow.

An example of the Dovern engine in a museum.

Lansens were frequently operated from dispersed airstrips, based upon rural roads

Rocket-armed A 32As with the belly tank and the cartridge deflector plates under the nose.

Fuselage and wings in the fatigue rig.

Pre-series 32-4 with the briefly-fitted dihedral tailplane. 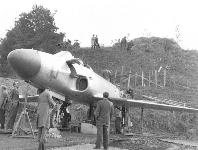 The prototype Lansen, with the early intake shape.

Old Lansens never die, they just learn new tricks! Take a Lansen, put a truck cab on top of the fuselage and make the Avon a snow-blower!

SE-DCN and 'L, two of the civilian J 32Bs used as target-tugs.

J 32B with special pylons for Rb 24 Sidewinders.

An S 32C with crew and equipment.

The first A 32A, 32001, with another test aircraft.
The SAAB-32 Lansen (Lance) will shortly enter service with Flygvapnet (Royal Swedish Air Force) as the A 32A, a two-seat all-weather, attack-fighter. The performance figures are secret but the Lansen has a top speed in the region of 700 m.p.h. An all-weather interceptor version will be known as the J 32. Planned for future consideration are a two-seat trainer Lansen and a reconnaisance version, the S 32. Present fixed armament includes four new-type 20-mm. cannon in the fuselage. Power is the Swedish SFA (licence-built) Rolls-Royce Avon similar to the 7,500-lb.s.t. RA.7R with additional 2.000-lb. thrust from afterburner. 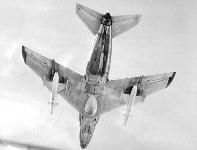 A Lansen with a pair of Rb 04s and belly tank 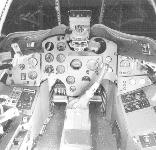 Early cockpit arrangement of an A 32A.

Left: The 'Ray' was modified with a slim rear fuselage and 'T' tail.
Right: The so-called Tip jet - asymmetric flying would have been an impossibility.

The Flying Wing (or the 'Ray'), one of the precursors to the Lansen.

The SAAB 202, a much-modified Safir, test-bed for the Lansen wing at low speed.