SP-ABC Celina, the last Fokker F.VIIb-3m built for LOT by Plage & Laskiewicz. The route board under the cabin windows shows that it was operating between Warsaw and Bucharest.

This view of the PZL 44 shows the unorthodox flight deck fenestration.

Prototype and the only example Polish PWS-54 (SP-AHY) on the snow-covered aerodrome during the winter 1932'33. Note ringed insigne of P.L.L. LOT on the fin.

PWS 24.T Roman in LOT livery. The PWS-24.T was the precursor of the PWS-52.T. First flown In 1931, the PWS-24.T was initially powered by a 220-h.p. Skoda-Wright Whirlwind as shown in the photograph of the first prototype SP-AGR. Designed to seat six passengers and crew, the PWS-24.T was operated by P.L.L. LOT - Polish Airline on the feeder route from Warsaw to Posnan. Experience showed that with a full complement the Whirlwind - PWS-24.T was underpowered, and the Wrights were replaced by the higher-powered 420-h.p, Pratt & Whitney Wasp Junior radial. Performance was improved to give a cruising speed of 110 m.p.h. and maximum speed of 139.5 m.p.h., for an a.u.w. of 4.800 lb. Service ceiling 11,400 ft. Some PWS-24.Ts retained the lower-powered Whirlwind and served as crew trainers and for aerial-mapping duties undertaken by P.L.L. LOT on behalf of the Government. The colour scheme was all-silver with navy-blue trimming and black lettering, including the airline badge on the fin.

The sole example of the PWS 21bis.

The Lublin R-IX with an R-X in the background.

The PWS 20.T after being fitted with a wheeled undercarriage.

The prototype Lublin R-XVIB ambulance SP-AKP, which first flew in the spring of 1933. 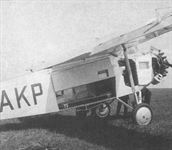 This view of the R-XVIB SP-AKP shows the upward-opening door for the loading of stretchers.