Still unnamed, the de Havilland D.H.110 has been accepted by the Royal Navy as a two-seat, all-weather strike fighter for carrier operations. This view shows the temporary nose probe, as well as the new one-piece dive brake under the fuselage, in line with the wing root. The leading-edge devices are carriers for stores.

Latest variant of the standard piston-engine basic trainer North American T-28 is the T-28C for the U.S. Navy. The cockpit canopy differs from the earlier U.S. Navy T-28B and the U.S .A.F. T-28A, and the T-28C has a revised rear (ventral) fuselage outline to incorporate a deck-landing hook.

Recent visitor to Prestwick was this Lockheed P2V-7 Neptune of the R.C.A.F. in Arctic markings. Wingtips and tailplane are red, and rest of wings and fuselage blue. P2V-7s of the R.C.A.F. are equipped with an M.A.D stinger tail and have under-wing rocket racks.

Recently revealed by the U.S.A.F. is this escape capsule which was originally designed for the Convair F-102. After the ejection sequence is set into motion the pilot and seat are moved from an upright to a supine position. The pilot can then withstand the 12g ejection loads imposed on him when the capsule is fired from the aeroplane.

The U.S.A.F. has recently introduced a revised system of identification markings for fighters and fighter/bombers. Formerly the lettering U.S. Air Force appeared on the fin and rudder above the serial number. As this photograph of a new production Republic F-84F-56-RE Thunderstreak shows, the lettering has been removed to the front fuselage and the last digit of the contract year (52-7010) has now been dropped from the tail serial. Similarly the "buzz number" (FS-010) formerly on the nose is now to the rear of the national insigne. 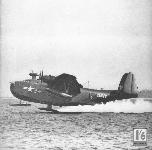 This Martin Mariner is being used to test the practicality of the hydro-ski for large seaplanes. The ski absorbs landing shocks better than the conventional vee-bottom hull.

One of the few remaining Fokker D-VIIs, which is on display at the Smithsonian Museum in America.

First photograph of the Auster Agricola, which has been designed for aerial fertilising. Engine is a 240-h.p. Continental.

This Supermarine 508 was spotted on the way to the breakers' yard.

The Fairey Ultra-Light Helicopter is a communications and observation aircraft suitable ror operation in any terrain: simple, transportable in a standard 3-ton truck, economical both in fuel and skilled maintenance requirements.
It carries a crew or two and its primary functions include A.O.P., Staff transport and communications, tactical reconnaissance and traffic control.

Restored in all its glory, this British-registered Zaunkoenig is a credit to the owners.