An-26 07 blue of 318 OSAP deploys a rescue raft during the Russian Navy Day flypast repetition over Sevastopol bay on July 27, 2017.

After a 6,000km flight, this An-32 underwent a major overhaul by Factory 410 at Kiev-Zhuliany, Ukraine in September 2017 including an avionics upgrade. The remaining two An-32s will follow. 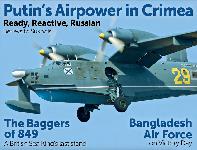 In 1998, Bangladesh ordered 24 MiG-29s, but due to payment problems only eight were delivered, spending a period of time grounded due to a lack of spare parts. They were put back in service with Indian help.

Of the 16 Yakovlev Yak-130 fighter-trainers delivered by Russia in 2015, three have already been written off in accidents.

Although there has been no official statement made, the Armada's preference for a replacement for the AV-8B+ Harrier is the F-35B Lightning II. Is there any other choice?

Six AV-8B+ Harriers from 9 Escuadrilla in formation as part of the events commemorating the centenary of the Arma Aerea de la Armada.

The primary role of the AB212+ is to support the Marines.

An AB212+ landing on the deck of the frigate Canarias (F86). The type is regularly used for surveillance missions.

An AB212 about to land on the flight deck of the strategic projection ship Juan Carlos I (L61), which replaced the aircraft carrier Principe de Asturias (R11) as the Armada's flagship.

The Armada's future helicopter will be a navalised version of the NH90, assigned to 5 Escuadrilla. Prototype NH90 GSPA01 during tests fitted with armament mounts undertaken at the Airbus Helicopters factory in Albacete.

Two of the seven L-39ZAs take-off for the final practice before the Victory flypast.

During the course of its long operational career, the Sea King has undertaken many roles with the Armada. Currently, the type is used for tactical troop transport.

Sea King ASaC7 ZE422/92 conducting a confined area landing. One of the rear crew is seen checking the clearance behind the aircraft as it comes into land with the bag containing the radar retracted.

Seven Sea King ASaC7s remained in service at the beginning of 2018. The type’s out of service date is in the third quarter of 2018 but 849's transition to the Merlin HM2 configured with the Crowsnest system is well underway.

Ground crew prepare a Sea King ASaC7 aboard the RFA Argus (A135).

The Sea King ASaC7 is one of the oldest and most distinctive military helicopters in the world thanks to its inflatable black sack on the right side. The sack houses a Thales Searchwater 2000 radar capable of detection of surface and air targets.

A Sea King ASaC7 flight crew includes two specialist observers seated side by side in the rear cabin behind two touch-screen mission consoles.

F-7BG F937 is operated by 5 Squadron in a blue and grey colour scheme, reminiscent of the two-tone blue that has now been replaced by grey.

The Bangladesh Navy took delivery of a pair of Dornier Do228-212NGs in 2013. Two more were recently ordered for security and SAR duties.

Two AW139s were acquired from AgustaWestland in 2015 for maritime patrol and SAR duties.

A number of Bangladeshi military aircraft carry quasi-civilian registrations in the S3- range, some in addition to serials. This is the Army's sole Cessna C208B Caravan, based at Tejgaon.

US Army AH-64 training is now focusing on where the aircraft have to be low in the trees against a near peer adversary.

The 12th Combat Air Brigade now meets the operational needs of the European theatre through a regionally allocated force resourced through other CABs based in the continental United States.

Ansbach in Bavaria is the current home for the 12th Combat Aviation Brigade.

The AH-64s are put into teams of two or four aircraft, one of which must have a Longbow radar.

Maintainers working on an AH-64 at a forward area refueling point in the Grafenwohr Training Area.

A Hydra 70mm rocket pod and the AGM-114 Hellfire missile.

AH-64 pilots benefit from the Longbow system, which presents the top 16 targets.

The Bangladesh Army's three Cessna 152s based at Tejgaon were fitted with smoke streamers on the wing struts for the flypast.

The sole Citation VII assigned to 4 Escuadrilla is primarily used for VIP transport.

The ferry La Superba manoeuvring while searching for a man overboard.

Images acquired by the CASI system of a cannabis farm in Albania.

The console has two displays. In this photo, the top screen shows the video fed from the multi-spectrum sensor, the lower screen also shows the FLIR image, the radar picture and the mission track.

The P.166DP1 cabin features a systems operator console on the right-hand side.

A flight grid flown by a P.166DP1 over an archaeological site at Pompei.

The Seahawk is the primary helicopter embarked on the Armada's frigates.

Built by Spanish firm Indra, the Pelicano UAV was tested by the Armada in 2017 as a potential surveillance aircraft.