A revised three-view drawing of the Embraer EMB-145.

Soviet exhibits at Farnborough at the bottom end of the scale comprised a Sukhoi Su-26MX. It was transported in the An-225.

A three-view drawing of one version of the Gulfstream-Sukhoi SSBJ (supersonic businessjet), with three engines. Power plant development is to be a joint effort by Rolls-Royce and the Lyulka design bureau, and may allow the SSBJ to evolve as a twin-engined design.

The Tay-engined BAC One-Eleven 2400, first flown on 2 July 1990, was another Farnborough debutante.

A revised drawing of the Kamov Ka-62, a version of which is to be developed with Rolls-Royce/Turbomeca RTM322 engines.

A three-view drawing of the P132, a projected maritime patrol derivative of the British Aerospace ATP that is being actively promoted.

Models on the British Aerospace stand showed the Harrier III.

Making its first appearance in a flying display, the "proof-of-concept" Chichester-Miles Leopard had previously been seen at Farnborough in 1986, before its first fight

An impression issued at Farnborough by Aerospatiale, depicting the AAC-90 regional jet.
The designations AAC 90 and AAC 120 are being used to identify 90-seat and 120-seat variants of the rear-engined twin-turbofan airliner that is being studied by Aeritalia/Aerospatiale/CASA as a possible joint programme, with the larger aircraft differing principally in fuselage length. The low wing features winglets and the aircraft has a T-tail. Max take-off weights for the two sizes of aircraft are 89.500 lb (40 600 kg) and 104.700 lb (47 500 kg) respectively and to achieve the required performance the aircraft will need engines in the 14,500-lb st (65-kN) bracket such as the Rolls-Royce Tay 700, a new variant of the IAE V2500 or the Allison GMA3014. Presentation of the AAC projects at Farnborough was low-key, with the consortium still working to identify the market, and at the same time exploring the possibility of a partnership with MPC Aircraft, the Deutsche Airbus/CATIC combination that is close to launching its MPC-75. This also is planned in 100- and 130-seat variants (as the MPC-75-100 and -200 respectively), but is now firmly established with underwing engine configuration after earlier study of rear-mounted propfans.

A three-view drawing of the AAC-90 project and side view (bottom right) of the longer AAC-120.

Impression of the lengthened MPC 75-200.

Impression of the AAA project on land

Impression of the AAA project on water.

The Ishida TW-68 tilt-wing project is in the final design definition phase and plans for prototype construction in the US are close to completion.

A three-view drawing of the Ishida TW-68 project for a 14-passenger general-purpose tilt-wing aircraft. 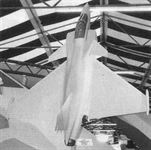 Models on the British Aerospace stand showed the P112

This model displayed on the Yugoslav joint stand at Farnborough depicted for the first time the Novi Avion, a project for an advanced multi-role fighter that has been under study for several years. A choice of engine has still to be made, proposals having been made by Rolls-Royce (RB199), General Electric (F404) and Pratt & Whitney (PWH20). France has been selected to supply the radar and the missiles.