C-46 1002 of the REAF delivering fresh food, including live chickens, to the Tactical Air Force's main forward airfield at al-Arish late in 1948. 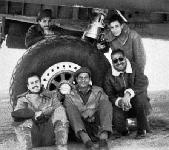 A gathering around the mainwheel of an REAF C-46.

The Egyptians restored several C-46s to flying condition using scrap abandoned by the Allies in Egypt. They entered REAF service in the late summer or autumn of 1948.

Newly-commissioned Plt Off Tahir Zaki, with one of the Hawker Hurricane IIs used by the REAF as advanced trainers in 1947, probably at Helwan.

Plt Off Tahir Zaki with one of his taller colleagues in front of an REAF Hawker Hurricane IIC (probably KX562) at Helwan in 1947.

Sqn Ldr Baldwin of the RAF (centre) with four REAF pilots and Ahd al-Ra’uf, a more senior REAF officer, during one of the training courses at al-Ballah a few months after the Palestine War. Note the differing styles of green-white-green spinners on the Egyptian Spitfire 9s in the background.

An Israeli raiding force initially captured a second REAF Spitfire 9 under camouflage netting rather than in a blast pen at the al-Riash dispersal strip. They were driven out of the area before it could be taken back to Israel, so they burned it instead.

Hawker F2/43 Fury NX798 was registered as G-AKRY for civilian for demonstration flying. With bare metal finish, a red spinner and fuselage stripe, it was flown to Egypt by test pilot Bill Humble in April 1948. It was commandeered for use by the REAF. The Egyptians added cannon from unserviceable Spitfire 9s, along with pilot armour, a gun camera and universal bomb carriers. At first it was flown in its civilian markings and on June 4,1948, Sqn Ldr Abu Zaid recorded the REAF's first confirmed air combat victory while flying this machine, shooting down an Israeli Fairchild Argus. It was later camouflaged and given the serial number 701.

Hawker F2/43 Fury 701 of the REAF, early July 1948. It flew its first missions in this guise on July 11. The entire aircraft, upper and lower surfaces, appear to have been painted in desert camouflage, though the colours do not seem to have been RAF-style 'sand and stone'. Fury 701 is known to have flown in this paint scheme without doors/coverings on the undercarriage. It was also fitted with ex-Spitfire universal bomb carriers, but these are not shown in this illustration.

G-AKRY - prototype Fury - was 'appropriated' by the Royal Egyptian Air Force for use in the 1948-1949 Palestine War. It became the first Egyptian aircraft to score an air-to-air 'kill'

Former Royal Flight Beech D.18 F4 at the time of the Palestine War.

King Faruq of Egypt (second from left in front row) inspecting an REAF Lysander with a full load of bombs on its stub-wings, July 1948. The Egyptian ruler is accompanied by Abu Rabia (far left in front row) and Miqaati (fourth from right) who, two days later, forced an Israeli Avia to hit the sea while at the controls of a Lysander, probably this same aircraft.

One of the REAF's surviving Lysanders under maintenance in what is surely a posed photograph. This seriously outdated aircraft (Y516) was listed in the TAF's Operational Diary simply as 516, and is known to have flown at least seven missions during the Palestine War, more than any other Lysander.

Another of the Egyptian Mk Is, Y511, camouflaged and apparently attached to No 349 Squadron (GE code letters) serving in the Middle East early in 1943.
A REAF Lysander during World War Two carrying an unusual simplified and 'reversed' form of Egyptian national markings. There is no record of this machine (Y511) taking part in the Palestine War. Note the RAF-style identification code 'GF-L'.

Plt Off Abd al-Hamid Abu Zaid and some of his colleagues from 5 Squadron with one of their Gloster Gladiators (L9036) during the early part of World War Two.

REAF MC.205 1213 at al-Ballah shortly after the Palestine War, hy which time individual identification codes had been crudely painted on the fuselages.

One of the first Macchi MC.205s being crated at Valle Olona in Italy ready for delivery to Egypt. They were painted in overall 'nocciola chiaro 4' (light stone 4), but after arriving in Egypt they received a standard RAF-style 'sand and stone' desert camouflage scheme with azure lower surfaces.

Ground-crew bombing up an REAF Aero Anson I, probably during World War Two. The REAF's remaining Ansons were used for bomber training during the Palestine War, though it is possible that they carried out some tactical bombing strikes

OO-XAS was a Belgian-owned Stirling V civil transport, seen here at Thame.
Stirling V OO-XAS prior to setting off, reportedly for Spain and possibly then to Egypt. Visible on the side of the fuselage as the letters 'XK', the codes of the RAF's 46 Squadron

Three of the REAF's newly-delivered but unsatisfactory Stirling Vs during a display flight over Cairo in the late summer of 1948.