"Chronicler" and Bruce Robertson give the full history of Bostons and Havocs based in Britain during the last war on pages 263 to 267 in this issue.

Long-range tanks are now standard fittings on Boeing B-47s and B-52s. Note the huge bracing struts on this B-47E's tanks. 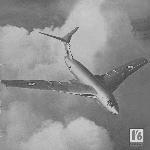 Реактивные Valiant, Victor и Vulcan пришли в британских ВВС на смену поршневым Lincoln и Washington.
A lengthened nose, deletion of the dorsal fin and vortex generators on the outer-wing panels, are the main external differences between the prototype and production Handley Page Victor, which will be introduced into R.A.F. service in the next few months. Photograph is of XA917.

First report of a Convair 440 Metropolitan in Europe comes from D. F. Gilpin, who took this photograph.

The superb finish of G-AFIR is evident in this photograph, sent in by A. W. J. G. Hume of Pinner, Middx.

LIFE SAVER. During the last war, aircraft of Bomber Command had their sorties recorded by a bomb painted on the nose, while Fighter Command's method was a Swastika for every enemy aircraft destroyed. The Royal Navy appear to have adopted this scoreboard method for their rescue helicopters. For every person saved an image of a man is painted on the nose of their machines. I took these photographs at the R.N.A.S. Station at Abbotsinch, and this particular helicopter was one of those used to rescue forty-one men from the motor-vessel Dover-fjell. Note folded rotors.

VICKERS TYPE 161 / 162. In 1927 the Air Ministry issued a specification (F .29/27) for single-seat fighter to be equipped with a 37-mm. quick-firing gun developed by the Coventry Ordnance Works. Two manufacturers received orders for prototypes to this specification. Westland built one machine (J.9565) which was a modified version of the wirebraced low-wing monoplane they had produced earlier to meet a more conventional single-seater fighter requirement (F.20/27). Vickers produced the unconventional Type 161.
The design of the Vickers 161 was unusual. The radial engine was mounted at the rear of the nacelle containing the pilot and armament, which was itself slung against the under-surface of the upper of the two-bay biplane wings. The tail unit was mounted on a long, tapering,. cylindrical rear fuselage fixed to a bearing on the rear face of the hub of the four-bladed propeller and was braced to the wing cell by tubular metal booms.
Like the Westland C.O.W. gun fighter, the Vickers 161 is believed to have been designed originally to take the British Mercury III radial of 485 h.p., but the prototype (J .9566) was actually built with the earlier Bristol Jupiter engine. It made its first flight from Brooklands in 1931, flown by Capt. J. ("Mutt") Summers, and immediately revealed a lack of directional stability. As a result, the prototype was modified and fitted with a much enlarged fin and rudder and fan-shaped fins extending rearwards from the ends of the tail booms. This modified design is believed to have been designated Type 162. However, the C.O.W. fighter requirement was not proceeded with and the Vickers F.29/27 was not developed further .

PIAGGIO P-149-1. The Piaggio P-149 flew for the first time in July 1953 . It is a civilian development of the P-148 two/three-seat trainer built for the Italian Air Force. Indeed, many parts of the two aircraft, including the wings and the horizontal tail unit, are completely interchangeable. The P-149, however, has been given a bigger cockpit cover, as the cabin has been redesigned to take four people. It has a retractable tricycle undercarriage instead of the fixed unit of the P-148.
Salient features: The machine is of all-metal construction; the wings are fully cantilever, of light alloy with slotted flaps and ailerons, and contain the fuel tanks, holding 52 .8 gallons. The fuselage is an oval-section monocoque; the tail unit is constructed in similar fashion to the wings . The retractable undercarriage is electrically operated, the main wheels folding outwards and the nose wheel backwards. The engine is a horizontally opposed flat six. The four-seater cabin is arranged for dual control, with full blind-flying, navigational and radio equipment, and there is a roomy luggage locker at the rear of the seats. The cockpit cover slides to the rear. 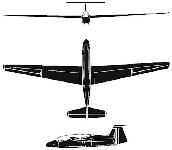 TEMCO MODEL 51. In spite of their expressed intention to leave the light trainer field after the non-success of the Plebe, Temco have lost little time in building prototype piston and jet trainers . Evidently the company do not intend Beech to have the market to themselves. Intended to appeal to the commercial and military market both at home and abroad, the Temco 51 prototype, N78856, began flight testing recently . It is entirely a private venture by the company, like the Model 58.
Salient features : Pilot and pupil are seated in tandem in a short fuselage, with a large moulded canopy . The size of th is cockpit cover, and the one-piece moulded windscreen, together with its placing forward of the mid wing, must give exceptional visibility . Aft of the cockpit is mounted the jet engine, with small ear intakes, and the simple tail unit is carried above the jet outlet on a short boom. The undercarriage consists of inwards-retracting, wide-track main wheels and a forward retracting nose-wheel. Construction is all metal, and provision is made for night-flying equipment.