The clean lines of the Alpha show well in this three-quarter front view. 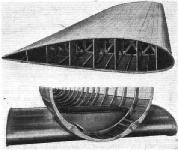 The flat plate multicellular type of wing construction and manner in which the Alclad skin is built up over ring-shaped bulkheads in the fuselage.

General arrangement drawings of the Northrop Alpha as a land and seaplane.

GOING OUT: Boothman's Supermarine Rolls-Royce S.6B being towed to the starting point on one of the special pontoons.

CHAIRING THE WINNER: Flt. Lt. Boothman receives enthusiastic support on his return to Calshot after completing the Schneider course.

SCHNEIDER WINNER AND WORLD'S SPEED RECORD HOLDER: ONE OF THE SUPERMARINE ROLLS-ROYCE S.6B MONOPLANES BUILT FOR THIS YEAR'S CONTEST. THE MACHINE SHOWN IS S.1596 ON WHICH STAINFORTH ESTABLISHED A NEW SPEED RECORD. BOOTHMAN S MACHINE IS IDENTICAL.

THE LAST SCHNEIDER EVENT: Bringing Boothman's, S 6B in after the completion of the 217 miles' course at an average speed ot 340-08 m.p.h.

A BRITISH TRIUMPH OF ENGINEERING: The Rolls-Royce "R" type racing engine fitted in the Schneider machines has been developed from the "H" type, but gives well over 2,000 h.p. for a weight of rather less than three-quarters of a pound per horsepower. The engine is geared and supercharged. In the upper photograph the supercharger can be seen on the left, while the two lower photographs show the engine from the front and from the rear.

HEADING FOR THE LINE: Stainforth's Supermarine Rolls-Royce S.6B snapped while getting ready to enter the speed course.

AT 400 M.P.H.: Stainforth approaching the 3 km. course during his flight on September 13, when he raised the straight-line record to 610.01 km./h. (379.05 m.p.h.). When the special engine has been installed in the machine another attempt will be made.

GOING AFTER THAT RECORD: The Supermarine Rolls-Royce S.6B, S.1596, being lowered down the slipway at Calshot for Stainforth's successful attempt to beat the speed record.

CHANGING A PROP: As in previous years, the Fairey Aviation Company has supplied all the metal airscrews for the Schneider machines.

FUELLING: This view of one of the new Supermarine Rolls-Royce S.6 B machines gives a very good idea of the clean lines and small frontal area. Large quantities of petrol are carried in the floats, more in one than in the other, in order to counteract the propeller torque.

THE THREE MACHINES WHICH MAY BE FLYING IN THE 1931 SCHNEIDER CONTEST: From left to right - S.1596, N.248 and S.1595. The central machine is the 1929 type modified, while the two other are the new machines built this year. Standing in front of the machines are the members of the Schneider Team.

READY TOR LAUNCHING: S.1596 on one of the special pontoons used for transporting the machines from Calshot to the point of take-off.

TRAINING: One of the 1927 Supermarine-Napier S.5 machines, N.219, going off on a practice flight.

A GOOD JOB WELL DONE: Flt. Lt. G. H. Stainforth returns to Calshot after establishing the new world's speed record. The photograph shows rather well the somewhat unusual shape of the Fairey metal airscrew. The pitch, it will be noticed, is quite perceptible.

"POSTPONED ON ACCOUNT OF WEATHER": Scene at Calshot on Saturday last. The Schneider machines are wearing their raincoats.

BOOTHMAN PASSING OVER THE SHORE AT SOUTHSEA: The beach was lined with spectators. 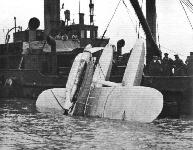 NOT A SUBMARINE - BUT SUPERMARINE: Salving the Vickers-Supermarine S.6B from Southampton water, little the worse for its ducking.

SCHNEIDER RECONNAISSANCE: A Fairey "Firefly" (Rolls-Royce "Kestrel") used for testing conditions. It also gave a demonstration of aerobatics on the day of the Contest. 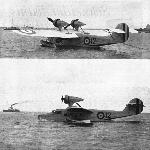 THE LATEST SARO "CLOUD": Two views of the machine on the water. The engines are Armstrong-Siddeley "Double Mongoose," and the estimated performance of the machine has been considerably exceeded.

ON TOUR: A Vickers "Vildebeest" torpedo bomber (Hispano-Suiza) fitted as a twin-float seaplane which is being sent on a tour of the ports of Northern Europe. It is being piloted by Capt. H. C. Biard.

FIRST, BUT NOT A WINNER: Brevier's Caudron "Luciole" 270 (95 h.p. Salmson) which was the first back at Orly, but penalties en route placed it 14th.

H.R.H. Prince Purachatra, Minister of Commerce and Communications (left), standing with H.H. Prince Alongkot, Acting Minister of War, in front of the A.T. Co.'s Puss Moths on Don Muang aerodrome. The interest of such high officials should help to establish aerial transport in Siam very firmly.

AT CAPE TOWN AIRPORT: A Fokker "Universal" (425 h.p. Pratt and Whitney "Wasp") of Union Airways. The Company started operations on August 26, 1929, and since then have carried air mails with great reliability. In addition to this machine the company have five "Gipsy Moths."

FAST TOURING: A fine flying view of the Lockheed "Sirius" seaplane in which Col. and Mrs. Lindbergh are touring the world. This machine has extra tanks giving it a very large range, is very completely equipped with flying instruments and wireless transmission and receiving installations. The speed of this "Sirius" has made it possible for Col. Lindbergh to make the trip from New York to Tokio via Alaska and the Behring Sea in a total flying time of 84 hr. 5 min.

BUS OF ALL JOBS: An Armstrong-Whitworth "Atlas" ("Jaguar") seaplane used by the High-speed Flight at Calshot.

A view of the Control Tower at Croydon lit by their own floodlight. The aircraft on the left are the two Vickers "Virginia" night-bombers.

A STRANGE-LOOKING BEAST: The De Havilland-built Autogiro has but three rotor blades. A wheel under the nose prevents overturning on the ground.

THE NEW AUTOGIRO: Front view of the latest type, built for the Cierva Autogiro Company by the De Havilland Aircraft Company. The engine is a "Gipsy III."

Lt. C. Byas, R.N., seated in his "Swift." The comfortable position which the cockpit allows the pilot should be noted.

A Comper "Swift" ("Pobjoy R") in full flight at Heston.

TRAINING: One of the Gloster-Napier VI monoplanes, which have been used extensively for practice flying by the Schneider Team.

THE PREMIER IN GERMANY: A short time ago Mr. Ramsay MacDonald visited Berlin by air, and our photograph shows him getting into the Fairey III.F. (Lion) at Tempelhof for the return flight.

TESTING CONDITIONS: Squadron Leader Orlebar going out in a Fairey "Fleetwing" to see if the weather is suitable for the Schneider machines. With him is Mr. W. Lappin of the Rolls-Royce Company.

WAITING FOR THE START: Machines lined up for the Dunlop Cup: Farman 231 (95 Renault);

The Supermarine flying boat with new power plants. The ordinary Southampton, but with two Rolls-Royce "Kestrels."

A BELGIAN COMMERCIAL MONOPLANE: The S.A.B.C.A. S.XI is of all-metal construction except for the fuselage covering, which is fabric. The wings are covered with flat Duralumin sheets.

THE WINNER: Count de Rouvre's Morane "Moth" ("Gipsy") on which he won the Dunlop Cup Tour of France. The Count (in plus "quatres") is handing over his log.

The well streamlined and clean undercarriage of the Beta is particularly noticeable in this view.

AVIATION ENTHUSIASM: A small corner of the field at Southend showing some of the huge crowd which gathered to see the flying last Sunday. The Monospar (2 Salmsons) in the foreground caused a very great deal of interest and it was with difficulty that the crowd which surged round it could be held at bay.

NEW SWEDISH LIGHT PLANE: The "Viking," designed and built by Svenska Jarnvagsverkstaderna of Linkoping, was exhibited at Stockholm, and was described in our issue of May 29, 1931. The machine is fitted with a Cirrus-Hermes II B inverted engine, and is a three-seater capable of being converted into a twin-float seaplane. It can also be fitted with skis for use on snow.

AT THE WASSERKUPPE: The "Kassel 25" just before landing on the southern slope of the Wasserkuppe. This type will shortly be put into production.