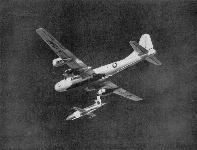 Passengers will get an excellent view from the Boeing 707 owing to the large number of windows.

An air-to-air photograph of the U.S. Navy Grumman F9F-8 Cougar reveals clearly for the first time the vertical camera installation under the nose and the "colander" air brakes parallel with the air intakes.

Recently handed over to the Air Transport Command of the Royal Canadian Air Force is this Sikorsky S-58 which will be used for transporting supplies under winter conditions. Hitherto, only the U.S. Army has taken delivery of S-58s. under the designation H-34A. 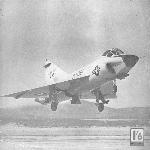 Currently undergoing acceptance trials at Edwards A.F.B. in the Mojave Desert is the side-by-side-seat Convair TF-102A combat proficiency trainer. Like the F-102A it is powered by a P. & W. J57 turbojet, but the canopy is wider and the intakes differ.

The prototype Dornier Do 27 was built at Getafe, Spain. by C.A.S.A. to the design of Officinas Tecnicas Dornier. This A.O.P./liaison monoplane. powered by a 225-h.p. Continental O-470-J. will be built in Western Germany for the new Luftwaffe.

A new Cessna. the four-seat Model 172 is the first Cessna high-wing design to feature a nosewheel undercarriage. The maximum cruising speed is more than 120 m.p.h. on the power of the 145-h.p. Continental engine.

SE-161 SAR LANGUEDOC. With its modification for Air-Sea Rescue work, the Languedoc takes on a new lease of life. The civil prototype of this aircraft, produced by Marcel Bloch, flew for the first time at Bordeaux in 1939, but it was not ready for service until 1942, and the first production model flew on 17th September 1945. Thereafter, sixty-two were delivered to Air France, a few others being sold to the Polish airline, Lot. Later, sixty were equipped for transport service with the French Air Force and also with the French Navy. The early models had four Gnome-Rhone 14N engines giving 1,020 h.p. The civil versions had Pratt and Whitney R-1830-92 Twin Wasps.
After an uncertain start, the aircraft gave useful service for several years before being superseded by later aircraft. A number have now been extensively modified for Air-Sea Rescue service. An observer's position has been installed in the forepart of the fuselage, and further aft a search radar is positioned in a transparent blister. There are also two dorsal radomes. In addition to its Air-Sea Rescue role, other Languedocs are currently in use as flying testbeds for a variety of piston and jet engines, and for other experimental work.

ARMSTRONG WHITWORTH A.W. WOLF I & II. The Armstrong Whitworth Wolf was designed at Coventry in 1922 by Mr. J. Lloyd as a two-seat Corps Reconnaissance biplane. Five were built in 1923 and of these three were prototypes, J6921, '22 and '23, one of which is assumed to have become G-AAIY because Wolf No. 4 became G-EBHI and No. 5 became G-EBHJ.
The first flight date of No.1 (J6921) was on 19th January 1923. Those of No. 2 and No. 3 are not known but Lloyds Register indicates that No.4 (G-EBHI) first flew on 16th February 1923 and No.5 (G-EBHJ) on 16th August 1923. Both were registered to Sir W. G. Armstrong Whitworth and were used for advanced Reserve Flying Training at the A.W. school at Whitley. The photograph of G-EBHJ shows the tandem-seat, dual-control Wolf I whereas the silhouette shows the projected Wolf II.
The Wolf II was planned in June 1923 and had provision for a Scarff-mounted rear-position .303-in. Lewis and a fixed, forward-firing .303-in. Vickers mounted on the port side of the fuselage. The second Wolf, J6922 and its successors had certain aerodynamic refinements.

This is the first official general arrangement drawing to be released of the Fairey Delta 2. It confirms a number of features which have been published hitherto only as intelligent surmise. Note the 10° droop of the "drawbridge" nose, the hinge line aft of the cockpit, and the 1 1/2 wing incidence. The Fairey Delta 2 may be the fastest single-engined aircraft flying today. Readers will know that the Minister of Supply officially stated on 11th November 1955 that it was regularly flying faster than sound in a climb.

LARSON DUSTER D-1. After several years preliminary study the Larson Agricultural biplane has been produced with the object of supplying a crop-duster which would be cheap, safe both from the point of view of flight characteristics as well as "crash survival" and which would be sufficiently rugged to stand up to the rough usage which the aircraft encounters in such work. The pilot is mounted behind both the engine and the load of 1,500 lb. of dusting material, while the top wing of the biplane gives him good turnover protection. The power plant is a complete package of mounted oil tank, engine and propeller, including 220-h.p. Continental R-670 engine used in the P217 Stearman, large numbers of which are obtainable cheaply as war surplus. The Jacobs 225 and the Lycoming 225 are offered as alternatives. The fuselage is of welded steel tubing fabric covered aft of the cockpit in the production model. The sheet metal wings have four panels all equal size with no centre section. There are no bracing wires. Fabric covering is used aft of the rear spar to save weight, The undercarriage is a tripod, split type, with standard Ford automobile wheels and brakes.

HISPANO HA-100 R-1 SAETA. Formerly known as the Ha-120R-1, the new HA-200R-1, built in Spain by Hispano Aviacion, has been designed by Willy Messerschmitt. The West German Government has now awarded a development contract for the type, which flew for the first time on 16th August 1955. Wingtip fuel tanks may later be mounted.
Salient features: A tandem two-seat, the Ha-200R-1 has a long, single, strutted canopy and a divided nose intake feeding the Marbore 2 turbojets. The circular-section rear fuselage tapers away to a sharp point at the tail. Wings are square-cut with maximum taper on the trailing edge. The jet effluxes on either side protrude from the trailing edge and are canted downwards. The fin is equi-tapered with a blunt top, the tailplane being mounted at the fin-fin fillet intersection. Mainwheels fold inwards into the wing and the nosewheel backwards.