"CAMEL-FLAGED": We are indebted to Mr. Grenville G.O. Manton for this photograph of a Sopwith "Camel," until recently his property, which he had modified somewhat. It was fitted with a 40-45 h.p. Anzani engine, and flew quite satisfactorily, though naturally, with a greatly reduced performance.

THE HANDLEY PAGE W.8B: This machine was a 14-passenger, twin-engined (Rolls-Royce "Eagle") biplane, originally in service with Handley Page Transport, in 1922.

THE Do.X AT LISBON: A reader sends us the "snaps" of the Do. X beached for repairs.

THE ARMSTRONG-WHITWORTH "ARGOSY": Since 1926 this has been the machine to do most of Imperial Airways' landplane work. The engines are Armstrong-Siddeley "Jaguars."

Lt. Comdr. Glen Kidston (left) with his Lockhead "Vega" monoplane (450 h.p. Pratt and Whitney "Wasp") which he "tried out" at Croydon last week. Lt. Cathcart Jones also took a turn at the "stick." Note, from the two views on the right, the N.A.C.A. cowling and the very neat metal monocoque fuselage.

LE RENARD METALLIQUE: The Fairey all-metal "Fox" with Rolls-Royce F type engine is a high performance bomber. Its excellent qualities have received recognition recently in the form of substantial orders from the Belgian Government. The machines for Belgium will be almost identical with the British version shown here.

THE GLOSTER S.S.19. OR MULTI-GUN MACHINE IS ARMED WITH NO LESS THAN 6 MACHINE GUNS

The Westland "Wapiti," Mark V, G-AAWA, fitted with an Armstrong Siddeley "Panther," which has been sent out to South America to give demonstrations.

THE SECONDARY ASSEMBLY LINE: In this, which is 100 ft. long, there is room for four "Wapiti" Fuselages.

THE FINAL ASSEMBLY LINE: Small castor wheels are fitted on the axles to enable the machines to be moved sideways or forward.

THE HANDLEY-PAGE "HANNIBAL": Fitted with 4 Bristol "Jupiter" engines, this machine, which was designed to carry 42 passengers, is intended for the European and Cairo-Karachi sections of the Empire air routes next summer. 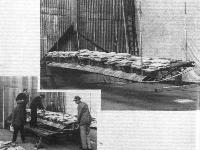 LOAD-TESTING THE "PUSS MOTH": These two photographs show a "Puss Moth" wing being loaded up with shot and, in the upper picture, supporting a load of 4,530 lb. A few seconds after this photograph was taken the wing collapsed. The factor required is 5 1/2, and this was actually slightly exceeded.

The little American Aeronca - or "Flying Wigwam" - flying at Croydon.

A "FLY-WEIGHT" MACHINE: Mr. S. A. Thorn ready to take off in Col. Ormonde Darby's Aeronca. 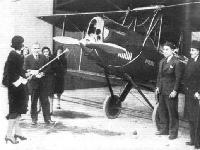 THE FATAL STROKE! Mrs. Taylor photographed just after striking the fatal blow! Mr. Allen, of Henly's, evidently thinks his aircraft worth such an anointing.

AFTER THE BAPTISM The B.P. (Jo.'s new Avian (Hermes II) ready for business.

FOR THE BUENOS AIRES EXHIBITION: This Avro "Avian" , "Cirrus-Hermes" II engine, has been shipped to Argentina, where it will be used for demonstration flights at El Palomar aerodrome.

One of the three-engined Ford airliners, employed by National Air Transport (Inc.) of America, with the ingenious wing mail compartments.

How the mails are placed in the ingenious wing mail compartments is shown in the top picture, while the lower picture shows an interior view of the compartment.

EN ROUTE FOR THE CAPE: Miss Reynolds and Mr. Pudney, who will shortly be flying to the Cape by the west coast route in the first Bluebird to be fitted with a Gipsy III engine.

THE "FLYING CARPET": Two americans, from California, Moye Stephens and Richard Halliburton, are carrying out a tour round the World in his Spearman biplane, fitted with a Wright "Whirlwind" engine. They arrived in this country with their machine, by boat, last week and flew to Heston Air Park on February 10. It is probable that they will resume their tour from Heston today - Friday - and they expect to complete their journey in two years.

A MACHINE WHICH LIVES UP TO ITS NAME: The latest Comper Swift (50 h.p. Salmson), a fast handy little one-seater and the property of Mr. Gordon Selfridge. Selfridge's, it may be of interest to note, have ordered eight Comper Swifts - two with Salmson engines and six with the new Pobjoy engine.

CATAPULT LAUNCHING OF AIRCRAFT: This photograph of a Fairey III F seaplane being catapulted off is reproduced by courtesy of the Admiralty.
Fairey IIIF Mk IIIM S1316 being launched from a Mactaggart Scott catapult in 1931.

THE "ISLAND" ABEAM: A Fairey IIIF taking off from the deck of H.M.S. "Glorious".
We are looking forward at a Fairey III F which is just taking off away from us. This view shows very clearly that, although the III F has a comparatively large span, she still has plenty of room when abreast the funnel or island, as it is called in this craft.

A SUCCESSFUL FRENCH LIGHT 'PLANE: The Farman F. 230, with 45-h.p. Salmson, which is another version ot the F.231 (100-h.p. Renault), on which Lalouette and de Permangle established the light 'plane long-distance record recently.

The first A.S.2 light 'plane used by the three Italian pilots in their flight round Africa.

ABOVE WINDSOR CASTLE: A remarkable view of the Castle with the River Thames in the background. The machine is a Hermes-engined Desoutter belonging to National Flying Services.

THE NEW FOKKER F.XII: Taxying out for a Demonstration flight at Croydon. 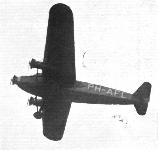 The Fokker F.XII taking up passengers at Croydon.

THE FOKKER F.XII: Side view. Note the length of fuselage in proportion to wing chord. 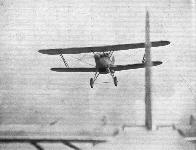 The Hawker "FURY" Interceptor Fighter with Rolls-Royce "F" Engine has been selected for R.A.F. equipment after extensive competitive trials - further proof of the all-round superiority of Hawker aircraft.

View showing the side and top batches for loading. The metal floor of the cabin is covered with 3-ply wood, and in the space between that and the bottom are the lockers for valuable goods.

The all-metal Junkers Ju.52 which with the B.M.W. VII, 700 h.p. engine has a payload of 4,680 1b. with a 622-mile range or 3,210 lb. when the range is increased to 1,244 miles. Mr. McDonough opines that the low-wing type will not be so easy to load as the high-wing type when on floats - an important point under N.W. Canadian conditions.
Three-quarter front view which shows the mounting of the wing flaps, giving a species of slot effect over them.

An interior view of the cargo space. 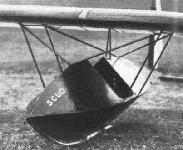 AN AMERICAN TWO-SEATER GLIDER: This machine was designed by the Leonard Motorless Aircraft Corp. for dual instruction. The fuselage is of steel tube construction.

THE "FALCON FOUR": Two views showing the machine in flight. The engines are Hermes II's. The machine is being built to the order of the Hon. Mrs. Freeman-Thomas.