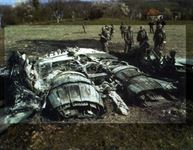 Being pressed into use against a number of ground targets, including armour, bridges and troop concentrations, the A-10A Thunderbolts of the 52nd FW were initially based at Aviano but have now been moved to Gioia del Colle in southern Italy. Armament includes Maverick air-to-surface missiles, 2.75in unguided rockets and sidewinder air-to-air missiles for self defence. 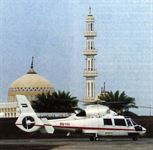 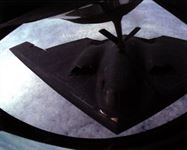 B-2A Spirit stealth bombers have flown a number of Global Power missions from Whiteman AFB in Missouri. This photo shows one aircraft refuelling while en-route to Yugoslavia.

Lockheed Martin reached an historic milestone at Air Force Plant No 4 at Fort Worth, Texas, on March 26, 1999 when it delivered the 3,035th F-16, making the F-16 the largest production programme in the Plant's history. A government-owned, company-operated facility constructed in 1941-2, Air Force Plant No 4’s previous record was production of 3,034 Consolidated B-24 Liberators over a 33-month period between April 1942 and December 1944, peaking at a monthly production rate of an incredible 230 aircraft in January 1944, an average of more than seven Liberators per day! Today, F-16 production is rather more sedate on the mile-long production line, due to a much smaller orderbook, although Fort Worth achieved 33 aircraft in one peak delivery month in October 1981. The 3,035th F-16, F-16C Block 50 96-5081 for the USAF seen here, is the 2,202nd delivered to the USAF and the 3,900th delivered overall, including production in Belgium, the Netherlands, South Korea and Turkey - with final assembly still being undertaken in the latter two countries.

The Danish/Norwegian contingent is based at Grazzanise near Naples. Both nations’ aircraft are carrying the AIM-120B AMRAAM but only the Norwegian aircraft were using the ALQ-131 jamming pod, loaned by the Netherlands Air Force.

To protect its air bases, the Italian Air Force moved a number of F-104S Starfighters to strategic airfields to provide a Quick Reaction Alert capability. At Gioia del Colle six 37’ Stormo F-104S-ASA-Ms from Trapani in Sicily await the call, most armed with a pair of AIM-9 Sidewinders.

Сербы осматривают обломки, собранные на месте падения "стелса", сбитого 27 марта 1999г.
Reasons for the loss of the F-117 have not yet been released although it is widely believed to have been downed by an SA-3 or SA-6 SAM. The debris will provide an invaluable source of intelligence data to Russia and other countries.

Boeing begins final assembly on April 1, 1999 of its Joint Strike Fighter X-32A concept demonstrator at Palmdale, California, with attachment of the forebody to the mid-fuselage. The milestone was met two weeks ahead of schedule, with Boeing using lean manufacturing and digital design techniques to reduce fabrication and assembly costs by 30-40% compared to original cost projections.

GPS-guided weapons, such as the AGM-86C ALCMs awaiting loading onto B-52s of the 2nd Bomb Wing at RAF Fairford, were invaluable during the early stages of the conflict when poor weather prevented optical and IR-guided weapons from being used.

Rarely photographed is this highly-modified Italian Air Force/46 BA C-130H Hercules, MM62001/'46-15', seen here visiting Zaragoza air base, Spain, on September 25 last year on a routine transport mission. Apparent in this view are some of the 20 small back radomes on both sides of the fuselage, indicating its use as something more than just a basic transport aircraft. The Italians are predictably reticent about giving any information on its role, which is presumably along the lines of an ELINT platform or similar.

Surprise participants at Dia de la Aviacion in Acapulco, Mexico, on February 9, 1999, held in association with the second Aero Expo '99 trade show there, were two newly-acquired Armada de Mexico (Mexican Navy) Mil Mi-2 Hoplites including MR-300 seen here. The helicopters are part of a batch of four acquired for SAR duties in mid-1998 via an American distributor, although they were built in 1986/7 and had spent most of the intervening years stored in Poland. Two are based at Acapulco Airport and the other two at Veracruz.

Updating the recent review of the Croatian Air Force, that report neglected to mention the MDH MD 500D helicopter, at least two of which have been confirmed as now in service for rotary-wing and observation training, including H-452 seen here at Zadar/Zemunick in June 1996. They were acquired second-hand on the commercial market and it is possible a few more may also have been acquired but the exact number in service is unconfirmed.

The first ATR 42-300 to join Havana, Cuba-based Aerogaviota, CU-T1451 (c/n 015, ex F-WQIQ, N19AE), is one of four former American Eagle examples which were traded back to ATR and subsequently placed with Cuban carriers Aero Caribbean and Aerogaviota recently. CU-T1451, seen here at Cayo Largo on February 3, 1999, is leased from ATR Asset Management and was delivered via Lanzarote on January 11.

Having abandoned plans to equip its W-3 Sokol helicopter with Israeli armament, PZL Swidnik has turned hack to France to equip the Sokol with the Euromissile HOT-3 anti-tank missile, seen here on Sokol SP-SUW with three tubes of a four-tube launcher mounted on the starboard outrigger weapons pylon during an official display of the helicopter at Warsaw/Okecie on March 18, 1999. The installation was integrated into the helicopter at the Swidnik plant during January/February and undertook its first official live firing demonstration on the Nowa Deba land forces range in southeast Poland on March 4. Note also that the Sokol is equipped with an SFIM Viviane day/night sight Integration of the missile on the Sokol is aimed at export markets rather than any Polish requirement, with Austria, Chile and the Czech Republic having all shown interest.

F-15E Strike Eagles from the 48th FW at RAF Lakenheath are operating from Aviano. Seen returning after a mission is this example armed with both AIM-120B AMRAAM and AIM-9 Sidewinder air-to-air missiles. Although still carrying four LGBs, the rear racks are empty, indicating some success.

Operating from Aviano are all the American Suppression of Enemy Air Defences aircraft. These include EC-130E/H Hercules from the 355th Wing at Davis-Monthan AFB in Arizona. 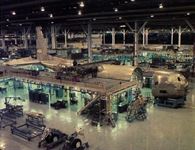 Pegasus Airlines Boeing 737-82R TC-APG (c/n 29329), the first Srs 800 for the privately-owned Turkish charter carrier, was handed over on March 25, 1999. The aircraft, the order for which was placed in September 1997, subsequently passed through Luton on March 27 en route to Istanbul.