Design and testing of the Ka-27M was carried out by Kamov at its Moscow facility in the 2000s followed by production at the KumAPE plant in Kumertau.

Noted on the ramp at Kinshasa in late 2016 was Congolese Air Force Douglas DC-8-55(F) 9T-TCN, probably the last flying military DC-8 in the world.

Wearing Bundeswehr test side number 98+51, the first Marineflieger NH90 NTH (c/n NGEN01) made its first flight at Donauworth on December 8, 2016.

CityJet has ordered ten Bombardier CRJ900s, which will be used by the Irish carrier to provide wet-lease services for SAS out of Copenhagen.

After the Belgian Air Component Alpha Jets leave Cazaux in 2018, the aggressors of Escadron d’Entrainement 3/8 ‘Cote d’Or’ will be one of two Alpha Jet squadrons remaining in Armee de I’Air service.

Luftwaffe A400M 54+07 is seen landing at Cologne Airport on February 1, 2017 to collect material and personnel for airlift to Pristina, Kosovo and Incirlik Air Base in Turkey.

A400M 0037/F-RABJ (msn 037), the first operational A400M to participate in Exercise VOLFA undergoes inspection at Mont-de-Marsan after a triple bird strike to its left wing.

Three 35 Squadron C-27Js parked on the flight line at RAAF Base Amberley.

Two-seat MiG-35UB 712 takes off on a demonstration flight at Lukhovitsy airfield on January 27, 2017. 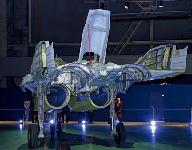 Three Egyptian MiG-29Ms were placed on display at Lukhovitsy in various stages of production.

Mitsubishi Regional Jet JA22MJ (c/n 10002) takes off from Grant County International Airport in Washington, where the three MRJ flight test aircraft are based at the Moses Lake Flight Test Centre.

The Beechcraft AT-6 is a light attack variant of the Texan II trainer and maybe a possible contender for the yet-to-be defined US Air Force OA-X programme.

Bell Helicopter has delivered the first fully customised aircraft from its new European Customisation and Delivery Centre in Prague with the handover of three emergency services-configured Bell 429s to the Slovakian company Air Transport Europe.

To meet the demands of training extra pilots for the F-35B Lightning II, 727 Naval Air Squadron (NAS) based at Royal Naval Air Station Yeovilton, Somerset is now providing elementary flying training (EFT) for the first time, relieving the burden on the traditional EFT training bases at RAF Cranwell and Barkston Heath in Lincolnshire. Two Royal Navy student pilots commenced EFT on the squadron's Grob Tutor T1 fleet in January 2017. The squadron confirmed EFT will be available to potentially four students per course, with a maximum of 12 per year under existing arrangements. Successful candidates will then move to RAF Cranwell to complete their training. Pilots graduating from the 727 NAS course will be selected to fly either frontline helicopters or fast jets.

The F-35 detachment of Marine Operational Test and Evaluation Squadron 1 (VMX-1) based at Edwards Air Force Base, California embarked three F-35Bs on board the USS America for the type's third set of F-35B ship trials, referred to as Developmental Test III (DT III), from October 28 through November 17, 2016.

Due to the stiffness of the landing gear struts, particularly the nose gear, taxiing in the F-35C results in excessive jarring of the aircraft and often requires pilots to stop if they need to make changes using the touchscreens on the cockpit displays. 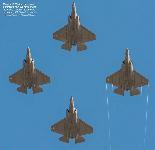 The Rough Raiders performed a diamond four flyover to mark the F-35C's arrival at Lemoore on January 25, 2017.

Elements of the Beluga XL core airframe are taken to Airbus’s L34 hangar at Toulouse for the start of integration for the first aircraft.

The first A330-900, seen here in the Toulouse paint shop, is due to fly in the first half of this year.

The Congress has passed a waiver to the continuing resolution so procurement of the Boeing KC-46A Pegasus tanker can continue.