Russian Mi-24V Hind-E 04 Blue (c/n 3532423117236) from the 296th OVE at Mahlwinkel, Germany, seen in 1992 before Russian units had all withdrawn from the country. Note the radically different front fuselage compared with the earlier Mi-24A photograph.

US Army YAH-64 73-22248, seen here being shown off by the manufacturers to the Army Air Corps (AAC) at Middle Wallop, UK, on July 24, 1982, was the first of two development Apache prototypes to fly. At the time, the US Army was still over two years away from receiving its first Apache, while the AAC could only look longingly at it - it was to be another 13 years before the decision was made to acquire the type for the British Army.

Grumman OV-1A 59-2603 (foreground) formates alongside the first OV-1B (59-2621), immediately identified by the externally-mounted elongated SLAR container. An early success in Vietnam, the type has continued in US Army service to the present day but is due for final retirement by the end of 1995.

The Boeing CH-47 Chinook has been widely used in support of armies worldwide for three decades, although with the notable exception of the US Army, is largely operated as an air force helicopter. This example. RAF Chinook HC.1 ZA675/'F' of 18 Squadron, wears a rather weathered scheme applied for desert operations during the Gulf War.

Mil Mi-24A Hind-A 33 Red on display at Khodynka in September 1993. This original variant of the Hind featured a large enclosed flight deck, giving a somewhat antiquated look to the helicopter - later variants featured a completely redesigned forward fuselage which gave a much more aggressive look.

Пакистан получил 20 AH-1S в 1980-е годы, позже их модернизировали до уровня AH-1F. Дополнительную партию вертолетов Пакистан получил в 2004-2008 годах.
Developed for the US Army as a dedicated gunship for operations in Vietnam, the Bell AH-1 HueyCobra has also seen export success in a number of countries. Depicted here is Pakistan Army AH-1F 786-007, one of 20 ordered, armed with eight Hughes TOW missile launchers, four mounted in pairs on each of the outboard pylons on the stub wings, and a 20mm, M197 three-barrel cannon in a universal turret under the nose.

The flying crane capabilities of the CH-54A Tarhe were regularly used during the later years of the Vietnam War for recovery of downed aircraft and the type has continued to give good service in the US Army until very recently. This example. 67-18458/Bonn from the 295th Aviation Company at Hanau. West Germany, is seen visiting Middle Wallop. UK. on July 26, 1995 for an airshow.

Another fixed-wing type to see service in Vietnam, and one of the first to be deployed in support of the H-21 helicopters to ferry spares around, was the U-1A Otter - this US Army example, 55-2973, carries the typical early high-visibility red and white colour scheme seen on the type in the mid-1950s. For operations in Vietnam, the Otters acquired less conspicuous overall drab olive camouflage schemes.
Eighty-four de Havilland (Canada) Otters have been ordered (as C-137s) for the U.S. Army.

Belgian Army Dornier Do 27D-J1 OL-D05, seen here in 1967, was one of 12 acquired from 1960. They remained in service until replaced by Islanders in 1976. The type also saw service in the liaison role with the West German Army. 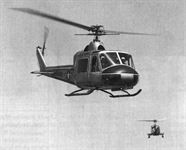 The first of many! Probably the most well-known Army helicopter of all time, the ubiquitous Bell UH-1 Iroquois, or Huey as it has become more commonly known, has served with military forces around the world in just about every role imaginable. Seen here is 55-4459/'I', the first of three prototype XH-40 Hueys (later designated XHU-1s), on its first flight on October 20, 1956, accompanied by a Bell 47/OH-13 chase helicopter.

Crews of Japanese Ground Self-Defence Force/1st Helicopter Group Kawasaki/Boeing Vertol KV-107/II-4s pose in front of their helicopters in 1974. Built under licence in Japan, the JGSDF operates the KV-107 in the tactical cargo/troop transport role. Capable of carrying up to 26 troops or 15 stretchers, some 60 entered JGSDF service.

The first of many! Probably the most well-known Army helicopter of all time, the ubiquitous Bell UH-1 Iroquois, or Huey as it has become more commonly known, has served with military forces around the world in just about every role imaginable. Seen here is 55-4459/'I', the first of three prototype XH-40 Hueys (later designated XHU-1s), on its first flight on October 20, 1956, accompanied by a Bell 47/OH-13 chase helicopter.

The classic Chipmunk has seen widespread use as a basic trainer but few armies have operated the type. An exception is the British Army Air Corps which has used Chipmunk T.10s for basic training from the 1950s to the present day, although this will shortly change when the type is retired and replaced by contractorised training. The example here, WP964, was a 'one-off' example operated by the Forward Air Control Flight at Middle Wallop in camouflage colours which earned it the nickname Spitmunk - it is still active today but is now only used for training alongside the other Army Chipmunks in standard red/white colours.

Forming part of the original complement of the Imperial Iranian Air Army were 14 Kaman HH-43F Huskies, as exemplified by 4-505 depicted here. The Iranian Army was one of very few foreign operators of the type, which was mainly used by the USAF for its base rescue flights.