TUPOLEV TU-104. The arrival of General Serov at London Airport on 2nd April in L5400, a TU-104 of Aeroflot, caused a major sensation. According to Soviet sources, it is in quantity production, and is shortly to enter service on all main Aeroflot routes. The TU-104 was first shown publicly at the 1955 Moscow Air Parade. Very little information of any value has been released, and the presence of armed guards discouraged close scrutiny at L.A.P. It could be seen, however, that fairly comprehensive radio and radar equipment was carried.
Salient features: Basically of the same layout as Badger, from which it presumably stems, the fuselage is long and slender, with clean, stepped cockpit and circular cross section. The pointed nose carries glazed panels. The wings are set low, with marked anhedral, and broken by the two long nacelles, mid-mounted close to the fuselage, and the trailing-edge containers for the main undercarriage. Sweepback is about 60 degrees, and there is a marked break in leading-edge taper at the inner of the two wing fences. Wingtips are square. The double nose-wheel and four wheel bogeys of the main units of the undercarriage retract backwards. Generous Fowler-type flaps are fitted. The single fin and rudder and fuselage-mounted tailplane are of the same shape as the wings, and similarly swept.

An Italian Air Force Packet, of the type seen over London recently.

Beaver. VR-LAA, of Sierra Leone Selection Trust, is the first aircraft on the Sierra Leone register. The VR series covers all British Colonies and Protectorates.

The new Australian "Kangaroo" insignia is clearly shown on the Beaver fuselage and wing. According to reader E. A. Coates, who sent the photograph, this insignia is a common sight on Australian service aircraft. 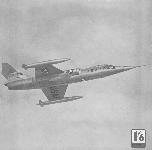 One of the first flight views to show the plan configuration of the Lockheed XF-104 Starfighter. Maximum speed is planned for Mach 2.0. Width of each wing from root to tip is 7 ft. 6 in.

LOCKHEED F-104A STARFIGHTER. Designed for Mach 2.0 and an operating altitude of 50.000 ft. the Lockheed F-104A is powered by the same J79-GE engine as the SM-61 Snark and the Convair XB-58 Hustler. With ramjet-effect afterburning, the General Electric J79-GE should be capable of power bursts exceeding 20,000 lb. s.t. Intake for the jet unit takes the form of a spring-loaded scoop just behind the forward-retracting main undercarriage legs. In the original XF-104 flown by CTP A.W.("Tony") LeVier in February 1954, the side intakes, now faired over, were employed in conventional fashion to feed the lower-powered 11,000-Ib . s.t. Wright J65-W-4 turbojet. The side intakes were found to be inefficient when trying to cope with the volume of air required for the J79-GE and the scoop became the only practical solution.
Salient features: Alleged to have forward vision "comparable to that of a motorist seated on the bonnet instead of behind the wheel of his car", the F-104A wing which is set two-thirds back on the fuselage, is of extremely low aspect-ratio with knife-edge and ten degrees anhedral. The Tee-tail is "all-flying", and is controlled by an actuating jack set in the streamlined housing above the tailplane. Slip-on tip tanks are optional.

Only one example of its kind flying in the United States is this Civil-registered Grumman Model G-55A Mk.II Bearcat (N700A). owned by the Grumman Aircraft Engineering Corporation and resident at Bethpage, Long Island, New York. This radio-aids bedecked Bearcat has been assembled from spares and is basically an F8F-2 (with the "Dash Two's" taller fin and rudder) with an F8F-1 radial, a Pratt & Whitney R-2800-C of 2,100 h.p. The maximum speed exceeds 450 m.p.h. Colour scheme is red and black. The "tuning fork" on the top of the fin is a Bendix MS-192C Navigation V.H.F. antenna. The belly drop-tank has been transformed into a "luggage boot".

The Crusader has already clocked over 1,200 m.p.h. in trials over the Mojave Desert. Illustrated is the second XFBU-1 with a new colour scheme. The first prototype broke up on 1st February of this year, over the Mojave Desert killing test pilot Harry Brackett. Production for U.S. Navy carrier interceptor squadrons is proceeding at Dallas, Texas. The Crusader is the world's fastest (and one of the heaviest) carrier-borne single-seaters, with a max. a.u.w. in excess of 23,000 lb. - only some 2,000 lb. less than the a.u.w. of a Dakota. Power is a 14,000-lb. "plus" Pratt & Whitney J57-P-4 fitted with afterburner device. Note how the "all-flying" tailplane has been depressed in order to permit the XFBU-1 to maintain a near-stall speed and attitude so as not to overshoot the photographic 'plane. This new view also shows the bulged gun packs to the rear of the knife-edge sharp nose intake. 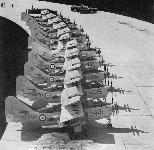 No other Anti-submarine Aircraft is so compact, efficient and economical as the Gannet. It combines in a single aircraft the ability to search and strike with the most formidable modern weapons, has twin engine reliability and is equally suitable for ship or shore based operations. Gannets are in squadron service NOW with the Royal Navy and Royal Australian Navy.

AVIA L.60 BRIGADYR. This recent Czechoslovakian addition in the light, general-purpose field has features reminiscent of many others in the same class, notably the Fieseler "Storch". The cutting down of the rear fuselage has, however, given a greatly improved rear view over that aircraft. Elaborate arrangements are available for crop-dusting and aerial spraying. Wide-span flaps, aided by the ailerons, which can be lowered simultaneously is degrees, ensure good-Iow speed characteristics.
Salient features : Slender fuselage, broadening considerably about the cabin to a flat, pointed nose. Tall, glazed cabin set well forward on fuselage. Long, multi-strut fixed tail-wheel undercarriage. Single fin and rudder, broad in chord with blunt tip and most of the slight taper on leading edge. High set on the fuselage, the tailplane repeats the fin and rudder shape; short bracing strut. Elevators set aft of rudder. High wings of narrow chord, no taper and blunt tips, strutbraced to undercarriage and fuselage.

This unusual squadron marking - light blue and dark blue panels separated by a wavy white line - distinguishes the Meteor N.F.11 as belonging to No. 256 Squadron, 2nd T.A.F., at Ahlhorn.

With "Land-O-Matic" nosewheel landing gear, "Hush Flight" anti-noise and vibration features and "Para-Lift" safe-approach landing flaps, the 1956 Cessna Model 182 sounds like a salesman's "dreamship". However, the Cessna high-wing cabin monoplanes have nearly thirty years of design and production achievement to their credit and the Model 182 is the latest of the progressive series, but only the second to be fitted with a tricycle undercarriage (the first was the 1955 Model 172). The single doors, one each side, are extra wide (36 in.) thus permitting the four-seater to be used for freight purposes. Powered by a 230-h.p. Continental O-470-L, the Model 182 has a maximum speed in excess of 160 m.p.h.

A rare photograph of a licence-built (Canadian Vickers Ltd ., Montreal) Northrop Delta Mk.la of the R.C.A.F., serial 667. The trousered main wheels were often replaced by a twin-float, multi-strut braced gear, for operations on the many Canadian lakes. Delta Mk.la's were used by No. 8 Squadron, R.C.A.F., for reconnaissance and transport duties. Bomb-carriers could be mounted under the all-metal wings. With a crew of two the Delta could take six passengers cruising at 160 m.p.h. Power: a 575-h.p. Wright Cyclone radial. One Delta Model I-D (N13777) is still flying in the U.S.A.

Still engaged in Marine Reconnaissance duties with R.A.F. Coastal Command, plus the Royal New Zealand and South African Air Forces, the Short Sunderland M.R. Mk. 5 is also in service with the French Navy on anti-submarine duties. A number of Mk.5 Sunderlands were delivered to l'Aeronavale in 1952. At the end of last year these French Sunderlands were ferried back to Short Brothers & Harland at Queen's Island, Belfast, Northern Ireland, for major servicing and overhaul. Piloted on this occasion by Capitaine Pillet, this Sunderland M. R. Mk.5 (ML77B) is seen here tying up in the Musgrave Channel.

Only three Yorks - including this one - remain in service with the R.A.F. They are used by the Transport Command Development Unit at Benson - hence the spatted tailwheel.

These two Vikings, CR-IAC (ex-G-AHPP) and CR-AID (ex-G-AIVB) were at Blackbushe recently, where they have been overhauled by Eagle Aviation Ltd., for Transportes Aereos Da India Portuguesa.

AUSTER AGRICOLA. Specially designed for aerial top-dressing work as a result of enquiries made in New Zealand about a specialist aircraft for this work, the Agricola first flew on 8th December 1955. It incorporates such refinements as built-in picket lugs and spoilers to counteract the lifting effect of gales. The dressing hopper, behind and below the pilot's seat holds 15 cwt. Simplicity is the keynote of the whole design.
Salient features: Angular fuselage with tall, humped cockpit and sloping rear deck. Small, flat, broad cowling with prominent exhausts. Large ventral hopper fairing. Big, angular fin and rudder with blunt tip and fairing from half way up leading edge. Rectangular tailplane mounted on top of fuselage. Thick low wing with wide, parallel chord centre section and equal taper to blunt tips. Fixed wide span undercarriage and steerable tail wheel.

One of the world's fastest single-seat, carrier-borne interceptors, the "Dash One" is seen here for the first time in flight bearing the new grey/white colour scheme of the U.S. Navy. At sea-level, the F4D-1 has a maximum speed of 730 m.p.h., while at 36,000 ft. the maximum speed is 660 m.p.h. Speeds are achieved with the afterburning 14,500-lb. s,t. Pratt & Whitney J57-P-2 and a loaded weight of 20,000 lb . Span is 33 ft. 6 in.; length 45 ft, 8 1/4 in. This view reveals the shape of one of the unguided (2.75-in ,) rocket missile pods and also the starboard three underwing carriers for similar rocket pods or extra fuel tanks. The bleed intake on the fuselage forward of the main intake is new.

Many readers have sent news and data of the Breguet 482, and we are pleased to publish this photograph of the complete aircraft.

Unlike the Marcel Lobelle inflatable "flying wing", the American Goodyear has an almost conventional (and literal) air-frame and tail assembly. The only rigid parts of the single-seat experimental Goodyear are the tubular Vee wing struts, the engine mounting and the compact main undercarriage and seat combined. An unusual feature in this unorthodox 'plane is the utilisation of a tractor power-plant in what is usually a pusher siting. The two-cylinder, horizontally-opposed engine delivers some 40 h.p. and drives a two-blade woden airscrew. No performance details have been released and for the time being no further tests are planned for this prototype (N39635) which was conceived, designed, built and test-flown in just over twelve weeks.