A TEMPORARY CRIPPLE: A forced landing at Bair. Waiting for a new engine to be brought by lorry from Amman, 150 miles away.

POLICING THE DESERT FRONTIER: Taken at a landing ground on the edge of the Wadi Sirhan. These six machines were doing a long reconnaissance, during a Wahabi revolt. A large party of Wahabis were sitting on their frontier, but a few miles away, when this photo was taken. 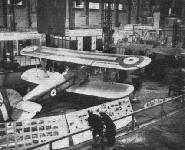 AT THE SCHOOLBOYS' EXHIBITION: One of the attractions was a Sopwith "Camel," used in the Great War, compared with a modern Hawker "Fury."

THE HEART OF THE "HART": The two views show a Hawker "Hart" fitted with a Napier experimental engine. The shape of the nose may give an indication of the engine inside.

THE HISTORY MAKERS: Orville Wright, who thirty years ago made the first aeroplane flight at Kitty Hawk, N.C., and Mrs. Amelia Earhart Putnam, the first woman to make a West to East solo flight across the Atlantic, are shown here at the new Franklin Memorial Institute, Philadelphia, standing beneath the 'plane in which Miss Earhart crossed the Atlantic, while beside Wright is the motor of the 'plane in which he made his memorable flight.

FIGHTING EQUIPMENT: Three A.W.XVI's ("Panther IIa") at Shanghai. The ruins in the background, before a Japanese bombardment during the first Sino-Japanese conflict, were hangars.

AN AERIAL SLEEPER: The sleeping accommodation provided by Eastern Air Transport on one of their Curtiss "Condor" airliners.

THE HISTORY MAKERS: Orville Wright, who thirty years ago made the first aeroplane flight at Kitty Hawk, N.C., and Mrs. Amelia Earhart Putnam, the first woman to make a West to East solo flight across the Atlantic, are shown here at the new Franklin Memorial Institute, Philadelphia, standing beneath the 'plane in which Miss Earhart crossed the Atlantic, while beside Wright is the motor of the 'plane in which he made his memorable flight.

HAPPY LANDINGS - PERHAPS! An Air-France airliner flying over Rio de Janeiro. As may be seen, the surrounding country is not particularly inviting.

AT THE SCHOOLBOYS' EXHIBITION: One of the attractions was a Sopwith "Camel," used in the Great War, compared with a modern Hawker "Fury." 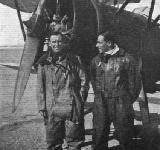 THE AVRO 626 ("LYNX"): Flt. Lt. Pope and his passenger just before the start of the Speed Race.

SPEEDING-UP BRITISH AIR TRANSPORT: The de Havilland D.H.86 can be regarded as a high-speed development of the "Dragon," from which it differs in having four engines and very tapered wings. The machine has not been through the Martlesham tests yet, and no official performance figures are, therefore, available, but one only has to see it fly to realise that it is very fast indeed. 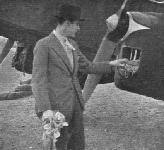 A WINNER: Mr. W. D. Macpherson, pilot of Mr. Lindsay Everard's "Dragon," who won the Circuit of the Oases, is seen removing the rags which have to be used for keeping out the fine dust.

THE DROP OF THE FLAG: Sqd. Ldr. Soden starting in the High-speed Race. His masterly flying was a feature of the tests before the Circuit.

SU-AAC taking part in the Egyptian International Aviation Meeting in December 1933.
CONSULTING THE MAP: Mr. and Mrs. Ahmed Salem before the start of the Circuit of the Oases. 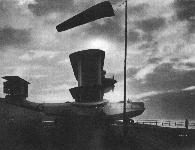 A YORKSHIRE SUNRISE: Launching the second of the four Blackburn "Perths" (Rolls-Royce "Buzzard II MS") at Brough on January 5. After the usual half-hour's flight by the company's test pilot, Mr. Blake, the machine was handed over to a R.A.F. crew from Mount Batten, who, under the command of Sqd. Ldr. J. H. O. Jones, of No. 209 (Flying Boat) Squadron, flew the machine non-stop to Plymouth, where it arrived the same afternoon.

FAR FROM HOME: A British-owned Comper "Swift" ("Pobjoy") over the entrance to Hong Kong harbour.

THE U.S.A. FORMATION FLIGHT: Five of the six "Consolidated" flying-boats of the U.S. Navy which flew non-stop from San Diego to Hawaii - 2,100 miles.

MODERN LINKS OF TRADE BETWEEN THE AMERICAS: Three of the large Sikorsky S-40 airlines of Pan American Airways flying over Miami. These machines, carrying 40 passengers each, are used for operating a daily service between Miami and various parts of South America.

THE "FOX MOTH" IN CANADA: In the course of its various duties in Canada, the D.H. "Fox Moth" is equipped with a variety of nether garments - wheels, skis and floats. Here is a "Fox Moth" with floats alighting in Toronto Harbour.

TANKING: Filling up the "Fox Moth" of M. Guy Hansez with "Shell."

TO THE LAST DROP: Measuring the fuel left in the tanks of one of the Farman machines.

THE DUTCH AIR MAIL RECORD: The K.L.M. Fokker F.XVIII, Pelikaan, snapped during its brief halt at Almaza, Cairo, during its record flight from Amsterdam to Batavia.

A SPLENDID RECORD: The crew of the K.L.M. Fokker F.XVIII, Pelikaan, in which they flew from Amsterdam to Batavia and back in record times. They are, from left to right, I. W. Smirnoff and P. Soer (pilots), J. M. H. Grosveld (mechanic), and C. H. van Beukering (wireless operator). Unfortunately, we published in last week's issue (page 11) an illustration which was stated to be the Pelikaan, but as a matter of fact the wrong photograph was inserted by mistake. Actually, the machine shown was the Snip - a sister plane on the same service. Sincere apologies!

A front view of the central portion of the new Gloster Fleet Spotter Reconnaissance Torpedoplane.

SIR JOHN SIMON IN ROME: The Foreign Secretary flew from Capri to Ostia in an Italian seaplane on January 3. On his arrival at Rome (shown here) he spent two hours with Signor Mussolini. 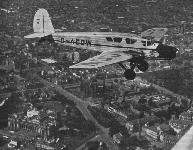 PRIDE OF POSSESSION: Mr. Granger shows his friends how he travels to Almaza Aerodrome, Cairo, on the day of the Speed Race, a race in which he did not take part, as his 1906 Renault is reliable but hardly fast!

UP AND OVER: M. Leon Challe making a quick take-off in the tests. He finished second in the Circuit of the Oases, having carried four persons in his Caudron "Phalene."

A TAKE-OFF TEST: M. Bedel in his Caudron "Super-Phalene" (Bengali).

AN ITALIAN SAILPLANE: Ugo Zannier, a young Fascist flyer of Gemona, Northern Italy, has built a new sailplane, on which he made a splendid flight recently. Launched from the top of Mount Quarnan, 1,372 m. high, he remained aloft for 11 hr. 37 min.

WELL FAIRED: The front view of the Avia 51 shows that there are no unnecessary excrescences.

THE AVIA 51: Careful streamlining has resulted in a cruising speed of 142 m.p.h.

THE ALL-METAL WING STRUCTURE: A sheet Duralumin covering extends over the leading edge and back behind the front spar.

THE ARC-EN-CIEL: The three-engined Couzinet 70 monoplane, which has been designed for the Atlantic section of the route, in place of the fast steamers.