India's MiG-21 Bison is an indigenous upgrade featuring a Russian slotted-array Kopyo radar to enable use of beyond-visual range air-to-air missiles, and a mix of French, Indian, Israeli and Russian systems.

The four Dauphins have been overhauled in Romania prior to being transported to Djibouti aboard an Antonov An124M-100 transport aircraft.

This highly-cropped frame shows what looks to be a Lockheed Martin Legion pod fitted to one of the F-16s seen over the Panamint Valley.

A model of the Lockheed Martin F-21. If selected as winner of the MRFA

During its operational service life with the active-duty Air Force, the F-117 Knighthawk was rarely seen at 200ft AGL, let alone caught on camera.

Level at 200ft above the valley floor, LEHI 1 makes one of multiple runs in Panamint Valley.

The pilot of F-117 84-0824 made at least two passes giving the 'shaka' gesture at the AIR International photographer.

New Hampshire Air National’s 157th Air Refueling Wing divested itself of all its KC-135R Stratotanker aircraft by March 24,2019. The veteran tankers’ replacements, 12 brand-new KC-46A Pegasus are expected to arrive at the unit's Pease Air National Guard Base home starting in the late summer. The flight crew of KC-135R Stratotanker 58-0104 pose for a group photo prior to flying the aircraft to Scott Air Force Base, home of the Illinois Air National Guard's 126th Air Refuelling Wing on January 30, 2019.

The tail of SF-260M+ ST-02 has received this commemorative paint scheme.

This camouflaged SF-260 seen at Florennes Air Base has since been painted in the modern grey colour scheme. 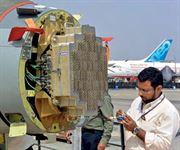 Tejas LA-5006 is the sixth IOC-standard series production aircraft in service with the 45 Squadron 'Flying Daggers' stationed at Sulur.

Differences to the aerodynamic configurations of the LCA Navy Mk1 and Mk2 (at the rear) include leading-edge vortex controllers on the wing of the Mk1 and small control surfaces on the tail of the Mk2.

The Airbus A380 will not be built after 2021, with efficient twin-jets such as the A350 and 777 having usurped the aircraft.

Air Nostrum Bombardier CRJ1000 EC-MXA (c/n 19060), operated for Iberia Express, now wears stickers marking the centenary of the Spanish football club Valencia. The livery depicts all the trophies won by the club during its history, the legend 'Un sentiment etern’ on the fuselage meaning, 'An eternal feeling’.

This Eurowings Airbus A320-214 D-ABDU (msn 3516), photographed on approach to Palma, has recently been repainted in a colourful livery to mark the centenary of the car hire firm Hertz.

US Air Force RQ-4 Global Hawk 08-035/GF wearing tail markings for the commander of Det 1, 69th Reconnaissance Group based at Anderson Air Force Base on the island of Guam.

A full-scale mock-up of the Triton, complete with Royal Australian Air Force markings and the serial number A57-001, was on display at Avalon 2019.

ETIHAD AIRWAYS has restructured its orders for Boeing and Airbus aircraft, with the Gulf carrier now committed to taking far fewer new jets than previously planned.

Some of the Ejercito del Aire personnel posted to the United States to undergo training with the MQ-9 Predator B pose in front of a US Air Force example. Many of the maintainers trained with the New York Air National Guard's 174th Attack Wing based at Syracuse-Hancock Field.

An artist's rendering of an Ejercito del Aire Predator.

Tentera Udara Diraja Malaysia A400 M54-04 operated by 22 Skuadron based at Subang, was leased back by Airbus Defence and flown to Avalon in a bid to woo the Royal New Zealand Air Force with the giant behemoth.

Textron Aviation's Citation 525B N46LW (c/n 525B0532) participated in Avalon 2019 boosting the business aviation component of the show.

A Global 7500 recently flew the 8,152 nautical mile trip from Singapore to Arizona non-stop.

Dassault Aviation's flagship Falcon 8X F-GCDP (c/n 439) is a company demonstrator no doubt made light work of the long journey from Bordeaux-Merignac to Avalon.

During each course there are typically three periods of flying during which students receive the necessary instruction before being assigned to Ejercito del Aire fighter squadrons.

During a period lasting nearly 50 years, Ejercito del Aire F-5Ms have been used to train more than 2,000 fighter pilots. Despite its age, periodic upgrades have given optimum performance to train pilots.

Although its primary mission has always been training, the F-5M maintains a capability to employ weapons, some of which are loaded on aircraft AE9-07.

Within the next five years the Ejercito del Aire will retire its fleets of F-5M Freedom Fighters and C101 Aviojet trainers.

Argentine Air Force pilots have been temporarily assigned to Ala 23 at Talavera for several years.

A HAL Dhruv adapted for ship-based operations with folding rotor blades and a folding tail boom is a contender for the India's Naval Utility Helicopter. 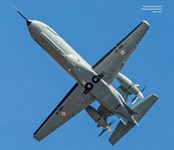 The Saras performed a flight demonstration every day.

THE PUBLIC weekend of the Farnborough Airshow has been scrapped, with the famous aerospace event now reduced in size from seven to five days.

Special Mining Services will use the Phenom 300E VH-UYX on domestic and international charter operations.

Airbus Helicopters made the engine selection announcement at the Heli-Expo 2019 exhibition in Atlanta, Georgia, on March 6, 2019.

The new H135s will be used for a range of roles in Forca Aeronaval da Mirinha do Brasil service, potentially including support for the country's Antarctic programme.

An artist's impression of an AW139 in the colours of the Victoria Police Air Wing. The organisation will receive three such cabs.

Finland has received US government approval to purchase the Boeing EA-18G Growler, together with the F/A-18 Super Hornet if selected for its HX Fighter Replacement programme.

An artist's impression of an H175 in the colours of China's Rescue and Salvage Bureau of the Chinese Ministry of Transport. The organisation has ordered two such cabs.

Kaman is developing a new version of the unmanned K-MAX.

The retrojets have been painted by International Aerospace Coatings.

The Schweizer Luftwaffe (Swiss Air Force) announced on February 18, 2019, that it has taken delivery of a Pilatus PC-24 executive jet, for operation by the Confederation Air Transport Service and Lufttransportdienst des Bundes. Aircraft T-786 (msn 21) was handed over on the above date at a ceremony in Berne, in the presence of Pilatus' Chairman of the Board of Directors, Oskar Schwenk and Bernhard Muller, Commander of the Schweizer Luftwaffe. The aircraft was originally ordered in July 2014 and will be based at Bern-Belp, primarily for use on operations within Europe.

Boeing 747-436 G-BYGC (c/n 25923), pictured at a gloomy Heathrow, is the first of four British Airways aircraft to be repainted as retrojets as part of the carrier's centenary celebrations.

F-35A Lightning II A35-009 is one of two assigned to RAAF Base Williamtown with the tail markings of 3 Squadron. 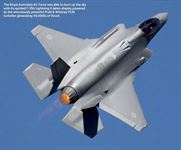 The Royal Australian Air Force was able to burn up the sky with its spirited F-35A Lightning II demo display powered by the enormously powerful Pratt & Whitney F135 turbofan generating 40,000lb of thrust.

ZJ-4630 is the second of three Light Utility Helicopter prototypes which collectively have accumulated 170 flight hours since flight testing began in September 2016.

India's Advanced Medium Combat Aircraft project developed by the Aeronautical Development Agency may go through a major transformation when the winning bid for the MRFA is invited to join the programme in the future.

According to Boeing the Loyal Wingman air vehicle measures 38ft in length. Scaling this shot, the depth of the fuselage appears to be in the order of 6 to 7ft and the vertical stabilisers a little closer to 8ft when measured from the fuselage underside.