Dark grey metallic shades of the Have Glass V paint illuminated by the spring sunshine at Leeuwarden.

Seen here taking-off from Albacete Air Base, Spain, after a fuel-stop on its return journey from Morocco to France in mid-April 2019, is 46-year old ALAT Aerospatiale SA330B Puma 1231/DDK. 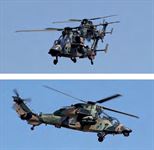 The Australian Army's Tiger ARH has matured into a potent weapons system and in 2018 the fleet of 22 helicopters flew the highest annual rate of effort on record.

Condor Airbus A320-211 D-AICA (msn 774) has returned to its retrojet livery, having spent several months in a hybrid Condor/Air Transat livery while on lease.

WestJet introducing Boeing 787-9s on routes to Europe from Calgary, including C-GUDO (c/n 64976) pictured here, has added even more seats to the transatlantic air travel market.

The UMS Skeldar V-200 will provide intelligence, surveillance, target acquisition and reconnaissance services to the Canadian Armed Forces on domestic and international operations.

Three Northrop Grumman AC-208 Eliminator special mission aircraft passed through Heraklion Airport, Crete, on their delivery flights to Afghanistan on April 10, 2019. The aircraft, N162EL (c/n 208B-5410), N262EL (c/n 208B-5411) and N263EL (c/n 208B-5414), had their Afghan Air Force markings painted out. They had spent several days on their journey from the United States routing via Bermuda, Lajes in the Azores and Jerez, Spain. They continued their journey east on April 12. Orbital ATK, Fort Worth, Texas, was awarded an $86.4 million firm fixed-price contract on March 13, 2018, to convert basic Cessna Caravans counter insurgency and reconnaissance aircraft capable of using the Advanced Precision Kill Weapon System.

Bombardier's Belfast plant builds wings for the A220, formerly the C Series.

Two Diamond DA20NG training aircraft, ET-AWT and ET-AWU, were seen passing through Crete in Ethiopian Airlines livery on April 10, 2019. The airline’s training academy in Addis Ababa is known to fly 16 of the type, but the machines seen in Crete were not among those. No orders for additional machines have been announced and neither the Ethiopians nor Diamond aircraft was prepared to comment.

The Arctic is an upcoming test location for the Schiebel Camcopter S-100.

The continuation of production and development of the Advanced High-performance Reconnaissance Light Aircraft is in doubt after financial problems led to shutting the factory in January 2019. 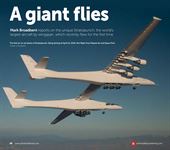 The first air-to-air photo of Stratolaunch, flying during its April 13, 2019, first flight from Mojave Air and Space Port.

At 385ft (117m), Stratolaunch's wingspan is the largest of any aircraft ever built.

Stratolaunch is designed to drop rockets that will put payloads into low-Earth orbit.

The MAGMA vehicle on the ground at Llanbedr in North Wales, from where its fluidic thrust vectoring and wing circulation control technologies were trialled.

The last three of 12 Tecnam P2002JF basic trainer aircraft for the Hellenic Air Force arrived at their new base, Tatoi-Dekelia near Athens, on April 5, 2019, five months after the delivery of the first batch. The aircraft, along with a SOFTEK simulator and a computer-based integrated training system were ordered in July 2018. In the first instance the P2002JFs will augment Cessna T-41Ds with 360 Mira Ekpedefsis Aeros (Air Training Squadron).

The Pratt & Whitney PW1100G-JM-powered A319neo is the last member of the A320neo range to enter flight testing.