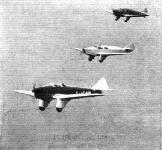 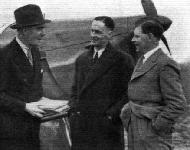 The front cockpit of the Miles "Hawk Major" has been very fully equipped with instruments for indicating the temperatures of petrol, oil, cylinder heads, etc.

Mr. Brook being congratulated by Flt. Lt. "Tommy" Rose on his arrival at Lympne.

One of the first batch of production-model Miles "Falcons," taken last week-end by a Flight photographer over Reading Aerodrome, where the makers' works are situated, and which is the home of the Reading Aero Club. The engine of the "Falcon" is a 130 h.p. "Gipsy Major" and the cabin seats three passengers and a pilot in comfort.

Ready for test: A Bristol "Bulldog" with Napier "Rapier" engine on the balance of the 24ft. wind tunnel. Control of the exit of the cooling air reduced the cost of cooling to 1 per cent. of the power of the engine.

"WITH BOOTS ON." Senor de la Cierva testing a C.30 Autogiro seaplane over the Medway at Rochester, where it has been fitted with floats by Short Brothers. The first Autogiro seaplane had an Avro "Avian" fuselage and was persuaded off the water off Hamble in Southampton Water. This happened many years ago, when the present system of rotor-starting had not been evolved.

SALUTE: The Duke of Gloucester, who is now home in England, made several flights during his world tour. At Balboa, Canal Zone, he broke his homeward journey in order to make a long flight over the Isthmus of Panama in a U.S. Navy Douglas "Dolphin." A detachment of the 33rd United States Infantry is here shown giving the Duke a musical send-off on that occasion

ETHYLISED: The "Dragon Six" which the Ethyl Export Corporation has just taken over for work in Europe and the East. The "Gipsy Six" engines have special aluminium cylinder heads with steel valve seats and Stellited valves, to enable advantage to be taken of the widespread supplies of leaded fuels of high octane value. The cabin is luxurious and the machine is finished in black and yellow. Mr. D. W. Lucke is the pilot.

UNITED'S FIRST: The new Dragon "Rapide," finished in silver with red struts, for United Airways' London-Blackpool service, which will be opened next month. 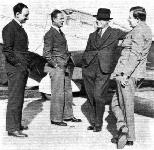 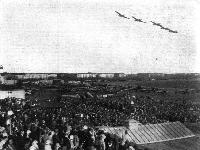 BERLIN LOOKS SKYWARD. The annual "People's Flying Day" was celebrated at Tempelhof Airport last Sunday, and this time the open possession of an air force added to the spectacular nature of the event, which was combined with "Air Force Day," the anniversary of Richthofen's death. The formation seen in this photograph is a very non-aggressive one of Klemm monoplanes.

THE TRIAL OF '35: A new Bellanca "Cargo Aircruiser," with a 700 h.p. Wright "Cyclone" engine, which has been delivered to Mackenzie Air Service, Ltd., the Canadian company, for work in connection with silver mining. The company's president, Mr. Leigh Brintnell, is here seen beside the new acquisition, of which he is also the pilot.

AN OUTSIZE IN AMPHIBIANS: Powered with two geared "Cyclones" of 715 h.p., this big Bellanca amphibian carries eighteen passenger at cruising speed of about 170 m.p.h. There is over fifty cubic feet of baggage space in the stub wings. The machine is a development of the Bellanca bomber, described in Flight, of February, 8 this year.

Two baby antelopes on arrival at Los Angeles from Wyoming, a distance of 1,500 miles.

Loading a young antelope, destined for a zoo, into a Fairchild 24 cabin monoplane 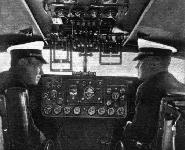 THE THIRD PILOT: The control room of Pan-American Airways' special long distance Sikorsky S.42. which is now at San Diego California, preparatory to making its first experimental trip across the Pacific. During the recent 2,504-mile test flight from Miami to the Virgin Islands and back, the Sperry Gyropilot was in control for two-thirds of the time, while Capt. E. C. Musick (left) and First Officer R. O. D. Sullivan attended to the navigation and to the experimental equipment. 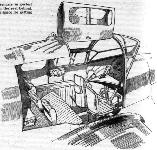 S.A.B.E.N.A.'s LATEST: The Savoia-Marchetti S.73 being demonstrated near Croydon. At the time when this picture was taken by a Flight photographer the machine was carrying most of this country's aviation correspondents!

CAWNPORE PERSONALITIES: The "big four" of the Cawnpore Flying Club. From left to right they are Mr. C. O'Malley, one-time secretary, Capt. Riley, the instructor, Mr. Grant Govan, one of the founders and owner of the "Puss Moth" in the background, and Mr. Clifford, the chief engineer

Fighters lined up during the manoeuvres.

PARIS WITHIN THE HOUR: The D.H. "Comet" for the French Air Ministry which, in the hands of Mr. Buckingham, flew from Croydon to Le Bourget in 54 minutes. This machine, one of two ordered, will probably be used on the French mail route across the South Atlantic, with Jean Mermoz as pilot. 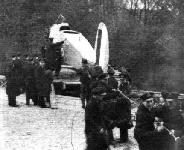 The arrival at Ingress Abbey of an "Atlas" aircraft with "Jaguar" engine, presented by the Air Ministry. These will be used for ground instruction only. 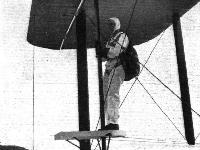 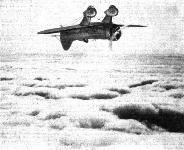 LOOKING UP AT THE CLOUDS BELOW: While airing and exercising his fascinating little Gee Bee "Sportster," Jack Weymann, a Chicago stunt pilot, makes a study of a strato-cumulus bank.

An overgrown Pou-du-Ciel - the drawings. 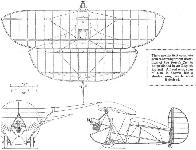 These are the first complete general arrangement drawings of the Pou-du-Ciel to be published in an English journal. A front wing span of 6 m. is shown, but a shorter wing can be used if desired.

A CHARTER FLEET: Six Koolhoven F.K.43 machines which are used by K.L.M. for light charter work. The family resemblance to the unhappily defunct Mark II Desoutter is as striking as it is inevitable.

Students at work on a "Gipsy" engine and on a "Moth.'' Apart from such work as this, no fewer than eight complete aircraft have been designed and built by the school.

Miss Meakin wheels her special glider into position for the tow-off Sir Alan himself brings up the end of the cable.

Just to show that it takes all sorts to make a world, is a French "no-wing" monoplane, M. Payen's racing single-seater; equipped with a 400 h.p. engine, it is expected to do great things.

A BOLD BELGIAN EFFORT. This is a photograph of a model of the Stampe et Vertongen S.V.-10 multi-seater bombing, reconnaissance and fighting machine now being constructed for the Belgian Government. It will have two Gnome Rhone 14 Krsd radials of 800 h.p. A maximum speed of 217 m.p.h. is called for by the contract, but this figure will probably be exceeded.

Workmanlike in appearance, the Rumanian I.C.A.R. commercial monoplane cruises at 130 m.p.h. with six passengers. The long, chord cowling of the 360 h.p. Siddeley "Serval" radial is noteworthy.

A view which shows the unusual interplane bracing, the unorthodox undercarriage and the hanging "car."

Note the overhanging turret in the nose and the small chord of the upper wing.

That the new Breguet-Wibault's maximum speed is 219 m.p.h. can be well believed after a glance at the photograph.

The cabin plans show the wide gangway and the position of the lavatory and doors.

AN AMERICAN SPRINTER. "Art" Chester's tiny two-year-old monoplane, in which he has done 272 m.p.h. over a closed course. The engine is a supercharged Menasco C-4-S developing approximately 200 h.p. A new machine, essentially similar, will have a six-cylinder Menasco.