Under the FY2016 air force budget request, planned divestiture of 39 F-15C Eagles will be postponed to increase near-term capacity and support the European Reassurance Initiative.

Royal Australian Air Force (RAAF) AP-3C Orion A9-660 from 10 Squadron at RAAF Base Edinburgh, South Australia, on the flight line at Nellis Air Force Base, Nevada, on January 22, 2015 awaiting the start of Red Flag 15-1.

US Navy MH-60S BuNo 168559/‘NG17' from Helicopter Sea Combat Squadron 14 (HSC-14) ‘Chargers' at NAS North Island, California, armed with an M-197 three-barrel 20mm gun system, mounted on the left side of the cabin, during a deployment to Naval Air Station Fallon, Nevada, on January 29, 2015. The gun is more normally fitted on the AH-1Z Viper and its installation on the MH-60S includes a much larger housing.

Russian Air Force Il-76MD RF-76714 carrying bombs on underwing pylons during the exercise on February 2, 2015. The ordnance is barely noticeable on this massive aircraft.

Upgraded Russian Air Force Tupolev Tu-95MSM Bear-H strategic bomber ‘53 Red' was handed over during a ceremony on January 27, 2015. The modernisation primarily involves replacing the avionics system to improve the efficiency of the aircraft’s weapon aiming system and adds the GLONASS navigation system. It gives the aircraft the capability to launch the new Raduga Kh-101 long-range cruise missile, which has a conventional warhead, and also the Kh-102 nuclear variant of the weapon. The upgrade will keep the aircraft in service until 2025.

Swedish Armed Forces Hkp15B 15039/‘39’ arriving at Maritime Air Station De Kooy in the Netherlands, prior to its departure on board HNLMS Johan de Witt for its participation in Operation Atalanta.

T2 Aviation's second Boeing 727-2SRF (G-OSRB, c/n 22929, ex N207FE and N480EC) leaving Manchester International Airport on February 4, 2015 bound for Doncaster-Robin Hood Airport in Yorkshire. The aircraft was painted by Air Livery into the house colours of Oil Spill Response, for which T2 will operate the aircraft alongside 727 G-OSRA.

The Spanish Army's third Tigre HAD (HA28-09-10010/‘ET-709’) at Almagro Ciudad Real on February 9, 2015 following delivery to BHELA I (Attack Helicopter Battalion I). The helicopter joins six Tigre HAPs and two Tigre HADs already at the unit, which will receive a total of 18 HADs and six HAPs.

The first of four Airbus A400M Atlas airlifters (M54-01, msn 022) for the Royal Malaysian Air Force seen during its maiden flight from the manufacturer's facility in Seville on January 20, 2015. The aircraft is expected to make an appearance in the flying display at the Langkawi Maritime and Aerospace (LIMA) show in March.

The last Gulfstream aircraft assigned to US Air Forces in Europe, C-20H 92-0375 (c/n 1256), undertook a crew training flight to RAF Mildenhall, Suffolk, on February 6, 2015. The aircraft is operated by the 76th Airlift Squadron, part of the 86th Airlift Wing based at Ramstein Air Base, Germany.

The Boeing Maritime Surveillance Aircraft is based on Bombardier Challenger, with N614BA (c/n 5614) used for tests.

Photographed during the high-altitude cruise, F-WWQA is one of three Falcon 8X test aircraft.

The first Peruvian Air Force C-27J Spartan, FAP-328/C.S.X62295, on the ramp outside the factory at Turin-Caselle, Italy, on January 14, 2015. The FAP has signed a contract for a further two of the tactical airlifters.

Philippine Air Force (PAF) C295M ‘129’ (c/n S-129) preparing for a test flight at Seville-San Pablo Airport, Spain, on January 23, 2015. The aircraft is the first of three on order to replace the PAF’s three remaining F27 Friendships.

Botswana’s Police already flies three Ecureuils for law enforcement and these will now be joined by three more.

The first EC135T2+ for the Australian Defence Force (ADF), N52-001/D-HECG (c/n 1179) ‘841’, which made its maiden flight on January 16, 2015 at Donauworth, Germany, during a subsequent test flight three days later. The helicopter was formally accepted during a ceremony there on July 23. 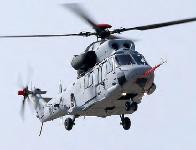 The first marine version of the KAI Surion made its maiden flight from Sacheon on January 19, 2015.

The first series production AW169 under assembly in Vergiate, Italy. There is a second final assembly line in Philadelphia.

Low-cost carrier easyJet has introduced the first major change to its colours since the 1990s, with Airbus A319-111 G-EZDE (msn 3426) first to receive the carrier's revised livery. The new colours will feature on all new deliveries from April 2015. In-service jets will receive the colours in scheduled re-paints. Twenty-nine aircraft will have the scheme by the end of the year and half of the fleet by 2017.

TAI announced in February 2015 its Anka B MALE UAV conducted its first test flight on January 30.

Ice accretion after three hours of a calibration run on January 25, 2015.

Left: The forward fuselage of BF-05 enveloped in an ice cloud during a calibration run on January 25, 2015. Middle: Water enters the duct at the forward point of the tunnel’s contraction section and is blown through nozzles at the jet where it accretes as ice.