The Czech Airlines TU-104A OK-LDC at London Airport on 16th March, on the proving flight from Prague. Regular flights are expected in about a month.

Rare Polish machine is illustrated here. This is the PZL P11c.

Jigsaw. The ground shadow gave the main clue to this aircraft, which is an experimental version of the Lockheed P-38 Lightning.

The Piper PA-18A Super Cub 150 G-APKB, powered by a 150-h.p. Lycoming O-320 is unique as the first British registered example to reach these shores. It is fitted for crop dusting and is based at Panshanger.

Joining a Squadron. First you go to an Operational Conversion Unit. Soon after you qualify you are shaking hands with your new squadron commander. Your life in a bomber squadron has begun.

PARNALL PANTHER (1917) Interest in this photo supplied by A. Tanner oj Northwood (Middlesex) centres on the Isle of Grain-developed emergency water landing devices: the vee-shaped hydrovane attached lo the main undercarriage (for use as a water ski) and the inflatable flotation bags. This was the sixth prototype of the carrier-borne 2-seat Parnall Panther, of which 150 production examples were built. Powered by a 230-h.p. Bentley B.R.2 rotary, this 29 ft. 6 in. span. Fleet Spoiler Reconnaissance biplane had a maximum speed of 108 m.p.h.

Flying in the Missile Age. The advent of the stand-off bomb (air-to-ground missile, for despatch several hundred miles from a target) greatly enhances the vital role of the V-Bomber Force for many years to come. 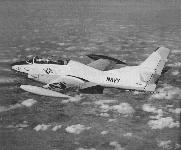 WACO MODEL UIC (1933). S.A.C. N. Dunmow, at present serving with the R.A.F. in Cyprus, has sent lo "Attic" this unusual photo of the only British-registered Waco Model UIC about to be off-loaded from a German vessel al Bremen in 1933. Owned by Lady Hay Drummond-Hay, this Heston-based Waco eventually went to Australia as VH-UAX.

Miss Joan Short's white Turbulent G-APIZ made its first public appearance at Goodwood on Easter Monday, having flown for the first time on 1st April.

Basic Training. Once through Hornchurch, you are a potential officer, ready to do your basic training. This you finish with the rank of Acting Pilot Officer. Then begins your flying training during which you do your first solo flight.

Recently near Moscow there appeared at the height of about 4,000 ft. a strange, fast-moving object. To many it looked like the mysterious flying saucer beloved by the space fiction writer, but to the initiated it was the Diskoplan experimental single-seat circular wing glider. This photograph, the first to be published in the Western world of the Diskoplan, shows the glider to have a curious tail-plane-fin arrangement. It has normal controls of the trailing edge oj the wing and, one would guess, a fuselage boom which supports the wing. The Diskoplan is said to be extremely docile in flight and almost impossible to spin. A power version of the machine is to be built and will be powered by a light jet engine.

Morane-Saulnier M.S. 1500 Epervier. The first prototype of the Morane-Saulnier M.S. 1500 Epervier was recently completed and is now undergoing ground tests before embarking on a series of flight tests. The principles behind the design of the aircraft were: a robust light aircraft capable of being adapted for multifarious duties; cheap to produce; simple to build, and economy of operation. It also had to be capable of operating under adverse conditions, and to operate from unprepared fields and landing strips. The prototype aircraft is fitted with a Turbomeca Marcadau turboprop engine of about 400 e.s.h.p. driving a two-bladed Ratier propeller, but later models will have the Turbomeca Bastan turboprop of 750 e.s.h.p. and a three-bladed propeller. The large bulged cockpit cover provides excellent all-round visibility, an asset when the machine is used for artillery observation duties. As a ground-support aircraft it can be armed with a variety of weapons under the wings, including 7.5-mm. machine guns, small-calibre bombs, air-to-air rockets, or SS-11 missiles. It can also be fitted with drop-tanks, and with these has a range of 750 miles. Armourplating around the cockpit protects the occupants against enemy ground fire. Finally it can be used as a training aircraft for pilots who are ready for advanced training.