Marine Attack Squadron 311 (VMA-311) AV-8B Harrier II BuNo 165573/WL02 on the taxiway at its home base of Marine Corps Air Station Yuma, Arizona prior to a four-ship training mission. The squadron’s F-35B transition slot has been taken by F/A-18C-equipped VMFA-122 because of the better health of the force.

Fouga CM170 Magister N315MB (former Armee de l'Air serial number 498) seen flying through a canyon within the low-level network in California. The aircraft is registeres to Swift Air International Inc and is understood to have been operating with the US Air Force Test Pilots School at Edwards Air Force Base, California.

Oregon Air National Guard's 173rd Fighter Wing based at Kingsley Field in Klamath Falls has painted F-15C 79-0041 in a bright colour scheme to mark the 75th anniversary of the Oregon Air National Guard. The jet was one of five Kingsley Field-based Eagles deployed to Luke Air Force Base, Arizona in late February to take advantage of the mild winter climate. Fighters that deploy to Arizona from bases in the northern United States for training during the winter months are colloquially referred to as snow birds.

The 82nd Aerial Targets Squadron Det. 1 based at Holloman Air Force Base flew its first manned sortie with a QF-16 full-scale aerial target on February 10, 2017. The flight was described by Det. 1 Commander, Lt Col Ron King as “significant because it is the first step in standing up the QF-16 programme. Compared to its predecessor, the QF-4 which was retired in December, Lt Col King said the QF-16 offers more realistic threat replication in performance, manoeuvrability and capabilities.

Fourteen KC-135 Stratotankers lined up during a simulated alert call to demonstrate rapid mobility capabilities within minutes of being notified of a mission at McConnell Air Force Base, Kansas.

One of three units to be deactivated as a result of CVW-14’s shut down was MH-60S Seahawk-equipped Helicopter Sea Combat Squadron 15 (HSC-15) based at Naval Air Station North Island, California. Named the Red Lions, HSC-15 operated MH-60S BuNo 68530/NA610 in this themed paint scheme featuring fearsome red lion artwork in 2012.

Four US Army UH-60Ls over Tarin Kot, Afghanistan. All the UH-60Ls remaining in US Army service will be upgraded to UH-60V configuration. 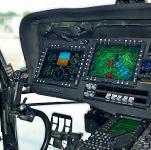 Single-seat Naval LCA 3002 (c/n NP-2) is one of two prototypes and was on static display at Bangalore.

The Naval LCA is reportedly underpowered, so the Indian Navy intends to use it for evaluation and pilot training purposes only. For operational tasks, 57 carrier-borne fighters will be acquired instead.

Emirates A380 A6-EEI (msn 123), marked with the United for Wildlife livery, departs Paris CDG. The type has been a major part of Emirates’ growth, but large widebodies like this are just one option for the Gulf carrier as it considers its next fleet purchase.

Before taking part in Red Flag 17-2 Spanish Typhoon pilots from Ala 11 and Ala 14 undertook air refuelling training with an Italian KC-767A.

Two Ala 11 Typhoons in formation near Moron Air Base, Seville.

111 Escuadron, one of two Typhoon units assigned to Ala 11, participated in Red Flag 17-2 with five aircraft and conducted mostly air-to-ground missions.

For the first time, Ejercito del Aire Typhoons overflew Naval Base Norfolk on their way to nearby Naval Air Station Norfolk.

Ejercito del Aire pilots walk to their aircraft for the first leg between Moron and Lajes.

Two PC-21s in full RAAF markings, still owned by Pilatus and displayed with their Swiss civil registrations, were at Avalon. Both aircraft are due to be delivered in mid-2017.

Mi-17s carrying the flags of India and the Indian Air Force led the flypast during the opening ceremony of Aero India 2017.

Republic of Singapore Air Force 127 Squadron ‘Stallion’ is celebrating 20 years of CH-47 Chinook operations this year and has painted commemorative markings on an upgraded CH-47SD featuring a glass cockpit, radar warning receivers and a radome housing a secure datalink.

Hainan Airlines’ Boeing 787-9 Dreamliner B-6998 (c/n 62718), pictured in Toronto, has been painted in this distinctive livery featuring characters from the Kung Fu Panda animated film.

A crew chief, pulls a maintenance platform up to a C-5 Galaxy at Ramstein Air Base, Germany. Airmen assigned to the 721st Aircraft Maintenance Squadron marshal aircraft to parking, chock the wheels, hook-up generators, check tyre pressures, refill oil, and refuel the aircraft.

Dhruv ZD-4146, is a rare example of an Indian Air Force Dhruv configured with a wheeled retractable tricycle landing gear. Most are equipped with skids; wheels are typical for the Navy’s variant. This variant is equipped with a self-protection suite similar to the system fitted to the Rudra.

This year's edition of the Avalon air show included debuts by five RAAF types. Two of the first four EA-18G Growlers delivered to RAAF Base Amberley the week before, including aircraft A46-306, were at the show.

To complete a quartet of CVW-11 aircraft in this section, EA-18G BuNo 168381/NH500 is the first Growler CAG-bird operated by Electronic Attack Squadron 142 (VAQ-142) ‘Gray Wolves’ which transitioned to the type during 2015 and continued work-up training throughout 2016. The squadron is set to make its first Growler deployment on board the USS Nimitz (CVN 68) during 2017.

The Japanese Maritime Self Defense Force retired the Sikorsky MH-53E Sea Dragon (export designation S-80M-1) on March 3, 2017. On February 20, 111 Kokutai carried out its last training flight on aircraft serial number 8625 from Marine Corps Air Station Iwakuni. Japan is the sole export customer for the Sea Dragon, operating 11 airframes since 1989. In May 2015, the US Navy signed a contract to purchase two decommissioned MH-53Es from Japan for parts, including 12 engines and two tow booms. AgustaWestland MCM-101 Merlins now conduct the duties once performed by the Sea Dragon using the AQS-24A airborne mine hunting system: the AES-1 airborne laser mine detection system and the Mk104 acoustic minesweeping device.

By February 2017 all four of HAL's Light Combat Helicopters had accumulated 850 flights. Sensors and weapons integrated on the LCH are systems already fitted to the Rudra.

Strike Fighter Squadron 147 (VFA-147) ‘Argonauts’ based at Naval Air Station Lemoore, California celebrates its 50th anniversary this year. The squadron has painted F/A-18E BuNo 166821/NH200 with the legend ‘1967 ARGONAUTS 2017’ along the top of the fuselage.

Marine Fighter Attack Squadron 122 (VMFA-122) ‘Werewolves’, an F/A-18C Hornet unit based at Marine Corps Air Station Beaufort, South Carolina, will take Marine Attack Squadron 311’s (VMA-311) slot for transition to the F-35B and will change its home base from Beaufort to Yuma, Arizona. In 2012 VMFA-122 marked its 70th anniversary with a commemorative colour scheme applied to F/A-18C BuNo 164247/ DCOO with the legend '70 Years of Steel on Target’ applied to the aft fuselage below the vertical stabiliser. The unit’s original 1942 name ‘Candystripers’ was carried on the underwing drop tanks.

F/A-18C Hornet BuNo 164671/NJ300 was the final CAG-bird assigned to VFA-15 before the squadron’s Spring 2017 deactivation. The aircraft is shown at low-level in a Californian canyon when operated by Air Test and Evaluation Squadron 9 (VX-9) ‘Vampires’ based at Naval Air Weapons Station China Lake.

Lockheed Martin is offering the M28 as a 19-seat airliner, with this aircraft currently undertaking a sales tour of South and Central America.

Airbus A319-119 D-ASTX (msn 3202), pictured at Manchester, is one of the first aircraft to transfer to Eurowings under the Lufthansa Group’s restructuring of Air Berlin. Thirty-three A320 family jets will move to Eurowings and three to Austrian Airlines.

Paramount is keen for collaborative production of the Mwari in the UAE and other countries in the region. Although not confirmed, Paramount is believed to have at least one launch customer for the Mwari.

A weapons load crew assigned to the 34th Aircraft Maintenance Unit based at Hill Air Force Base, Utah, loads a GBU-12 into an F-35A Lightning II.

In addition to Netra aircraft KW3556 on static display at Aero India, a second aircraft, KW3555, took part in the flying display. 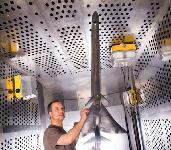 HAL’s Light Utility Helicopter (LUH) prototype ZG-4620 (c/n PT-1) made its debut at Aero India this year. The LUH is expected to achieve certification by December 2017 and subsequently enter production at Tumkur.

India’s fifth-generation Advanced Medium Combat Aircraft is expected to be in the 20-tonne weight class, and enter Indian Air Force service in the 2030s.

Weighing 12.5 tonnes, the Indian Multi Role Helicopter is the heaviest helicopter ever developed in India. A full-scale mock-up was placed in the middle of HAL’s exhibition hall for its Aero India debut.