Pride of place among foreign military visitors to Blackbushe undoubtedly went to the Luftwaffe Dakota 4.

In prime condition is this Spitfire XVI stored in the Auckland War Museum.

THIRSTY DAGGER. Underwing fuel tanks fitted to the Convair F-102A Delta Dagger are used only for ferrying purposes. They are not used in combat as the aircraft carries enough fuel in its wings to perform its mission.

Another S.E.5., this time from a New Zealand reader, Gordon Slatter.

AGGRESSIVE PIONEER. The Military Twin Pioneer is the first twin-engined, fixed-wing, STOL aircraft to be designed for military purposes. It can be used for communication, transport, paratrooping, supply dropping, bomb­ing and other duties.

EAST GERMAN MOOSE. On display in the Eastern Sector of Berlin in September was this Russian-built YaK-11 (NATO: "Moose") basic trainer. The red star marking of the Russian Air Force is faintly visible under the black, red and yellow diamond outlined in white. On the fin is serial 57211. Pale blue overall with red spinner and white fuselage numerals. Russian language instructions in cockpit.

Pride of place among foreign military visitors to Blackbushe undoubtedly went to the Dutch naval Mariner.

First photograph of the Lockheed CL-329 JetStar utility transport powered by two Bristol Orpheus turbojets. Performance with these engines has surpassed all estimates, and the JetStar may be offered to customers in this as well as the four-engine layout.

LOCKHEED CL-329 JETSTAR. Unchallenged leader in the field to develop and produce a new "off-the-shelf" light utility jet transport and crew readiness trainer for the U.S.A.F. is the Lockheed Aircraft Company. Its CL-329 JetStar took to the air for the first time on 4th September, just 241 days after development was authorised. Nearest rival to the JetStar is the North American Sabreliner now under construction. The prototype JetStar (N329J) is powered by two Bristol Orpheus turbojet engines (one each side of the rear fuselage) while a second prototype now nearing completion will be fitted with either four General Electric J-85 or Fairchild J-83 engines. By installing the Bristol engines Lockheed will be able to press forward with flight trials whilst awaiting delivery of the American engines. The engine location is designed to provide a minimum noise level in the cabin, and in the event of a nose-up landing the engines will be protected by the belly and low-set wing. The wing has a 34-degree sweep on the leading edge and owing to its location none of the structure interferes with cabin space. Stabilizer, which has similar sweep to the wing, is mounted approximately one-quarter of the way up the fin and is of the all-flying type. The cabin has accommodation for ten passengers and is pressurised to maintain an altitude of 8,000 ft. when the aircraft is flying at 45,000 ft. There is ample baggage room, and a galley may be fitted. A crew of two is the normal complement.

All 800 Series Viscounts are now assembled at Weybridge and all 700 Series on the Hurn production line shown above. Second and fifth machines in the line are the 754s G-APCD and 'CE (c/n. 243 and 244) ordered by B.O.A.C. for Cyprus Airways.

Fiat's Heron, l-BKET (Blackbushe News), is the second number of a series created by the distortion of the original British registration G-AKET borne by its predecessor, the Dove l-AKET (c/n. 04056).

The Avro CF-100 Mk. 5 is a development of the Mk. 4 with increased wing and tailplane span. The fuselage gun pack has been removed and armament, which consists of fifty-eight 2.75-in. air-to-air missiles, or six Sperry Sparrow self-homing missiles, is carried in wingtip pods.

ARROW UNVEILED. First authorisation for a design study of the Avro CF-105 Arrow was given to the company in July 1953, and the completed aircraft was rolled out from the final-assembly hangar at Malton Airport, Toronto, on 4th October. It is a two-seat supersonic all-weather interceptor, and the prototype is powered by two Pratt & Whitney J75 turbojets. Later aircraft will have Orenda Iroquois engines. It is claimed that the Arrow is on the threshold of the heat barrier, and that studies are now under way to adapt it for even greater speeds. 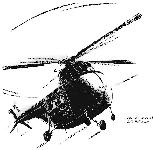 The Cessna T-37A is the standard two-seat primary trainer of the U.S.A.F. and will replace the present piston-engined T-34A Mentor. Flown for the first time on 12th October 1954, the T-37 was originally intended as an intermediate trainer between primary training on piston-engined aircraft and advanced training on a high-speed jet aircraft. Since then Air Force requirements have changed and the piston-engined aircraft phase has been dropped and an all-jet training scheme adopted. The T-37 features side-by-side seating for the instructor and pupil and is unusual in U.S. trainers in this respect. Of all-metal construction its wing incorporates high-lift slotted flaps, and an air brake is situated just aft of the nosewheel doors. Equipment includes provision for day and night instrument flying, jettisonable canopy and ejector seats. Engine inlet screens extend automatically over the wing-root air intakes when the undercarriage is locked in the down position, and they prevent stones or other debris entering the intake ducts during take-off and landings. The screens retract with the undercarriage. Power plant is two 920-lb.s.t. Continental J69-T-9 turbojets and they give the T-37 a maximum speed at 35,000 ft. of 393 m.p.h. Since the prototype was first flown the aircraft has been modified with the addition of a rear underfuselage strake, and a nose strake, one either side, which was fitted to increase fuselage damping and reduce spin rate.

CONVAIR F-106 DELTA DART. Latest of the Convair delta-winged interceptors is the F-106A Delta Dagger, a direct development of the world's first jet-powered, delta-winged aircraft to fly, the XF-92A. Development of the latter led to the design of the F-102 Delta Dart, which is now in service with the U.S.A.F. The first YF-102 was flown on 24th October 1953 and its speed fell well below official expectation. It was about this time that the area-rule theory was being applied to aircraft and Convair incorporated it into their F-102 design. The result was a much improved interceptor capable of supersonic speed. With the need for an all-weather fighter/trainer the TF-102A was produced as a two- seat combat proficiency trainer/tactical interceptor. It was first flown on 8th November 1955 and has the same armament and similar fire-control system to the single-seat version. Each operational fighter squadron will have twenty-one F-102As and four TF-102As. As can be seen by the silhouette, the F-106A bears a strong resemblance to its predecessors and is claimed to be, by its makers, the fastest all-weather interceptor. In the head-on view it is similar to the Convair XF2Y-1 Sea Dart, a water-based, hydro-ski fighter which never reached the production stage. The supersonic F-106A is to be used with the Air Defense Command of the U.S.A.F. and will, in time, replace completely the F-102.

The C.A.S.A. 207 Azor passenger liner was developed from the C.A.S.A. 202 Halcon, and is basically a scaled version of the latter. It is intended primarily as a thirty/thirty-eight-seat passenger aircraft, but is likely to be produced in military transport form to replace the obsolete types now in service with the Spanish Air Force. The prototype Azor was completed in August 1955 and made its first flight a month later. A development of the Azor, the C.A.S.A. 209 Super Azor, or HFB-209, may be constructed in collaboration with German Hamburger Flugzeugbau Company. Power plant for this aircraft is expected to be two Napier Eland N.El.6 turboprop engines of 3,500 e.h.p. each.
Data: Low-wing, twin-engined, thirty/thirty-eight-seat passenger and military transport of all-metal structure. Power plant is two Bristol Hercules 730, fourteen-cylinder, sleeve-valve, air-cooled engines of 2,040 h.p., each driving D.H. 4/4000/C constant-speed air­screws. Fuel capacity is 676 Imp. gallons giving a still-air range (with crew of four and thirty passengers) of 1,100 miles.

Among the Air France visitors to the Airways Club at Croydon in September were examples of the NC-853, fitted with Minie 4 DC-32B motors.

AUSTER ATLANTIC. Three-view drawing shows the latest from the Auster stables. Powered by a Continental E185-10 engine of 205 h.p. it will appear in two versions, the Winchester and the luxury Windsor de luxe.