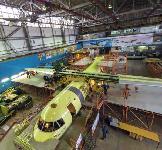 The wing was fitted to the first prototype An-132D demonstrator at Antonov’s Gostomel facility in Ukraine in mid-March 2016, major assembly was complete by April 1, and the Pratt & Whitney Canada PW150A engines were due to be delivered that month. 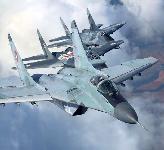 The current BWS MiG-29 fleet comprises 15 aircraft of which only seven are maintained in airworthy status, including three aircraft allocated for QRA duty.

Visiting Vienna Airport on March 30, 2016 was Islamic Republic of Iran Air Force Boeing 707-370C 1002 (c/n 21124). The aircraft, painted with a stylish black graphic and blue tail, is assigned to the VIP Squadron based at Tehran-Mehrabad Airport.

Seen departing McClellan Field on March 23, 2016, P-3A N900AU Tanker #00 (BuNo 151391) is being repositioned to its former home in Chico, California. Now owned by United Aeronautical Corp of North Hollywood, California, this former Aero Union P-3A was one of seven placed in storage at McClellan in August 2011 after the FAA cancelled its contract. It is the third one to leave McClellan, with Tanker #21 being repositioned to Tucson, Arizona on February 23 and Tanker #22 being sold to Buffalo Airways in 2014. 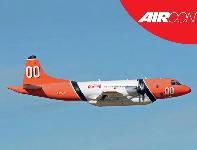 Real Thaw involved participation by P-3C 14809 belonging to Esquadra 601 ‘Lobos’ based at Beja.

Empire Test Pilots School Gazelle AH1 XX453 sporting a new colour scheme on the Salisbury Plain Training Area on March 31, 2016. This sortie is believed to have been its first since respray. The Empire Test Pilot School is based at Boscombe Down in Wiltshire.

Two Mi-28NEs at the Rostov-on-Don plant.

Seia municipal aerodrome served as a forward operating base and hosted a detachment of three Portuguese Alouette IIIs and four Kongelige Danske Flyvevaben AS550 Fennecs.

Four Aeronautica Militare F-2000As each loaded with two GBU-16 laser-guided bombs: not the kind of shot we see that often.

The demi-Pegasus in No.28 Squadron’s badge represents the white horse cut into the chalk of the Wiltshire Downs near Yatesbury where the Squadron was based in its early years. On April 7, 2016, Chinook HC4 ZH777, one of six currently assigned to the Squadron, was unveiled at RAF Benson in Oxfordshire with a Pegasus tail design during a ceremony commemorating 100 years since the squadron's formation at Gosport on November 7, 1915 as a training unit. 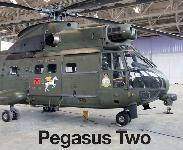 Owing to numerous changes, not least the formation of No.28 Squadron as a combined training unit for both Chinook HC4s and Puma HC2s in October 2015, April 7, 2016 was chosen as the date to celebrate officially the anniversaries and the move into new hangar facilities on base. No.28 Squadron runs a 27-week flying course covering a complex range of rotary operations to qualify flight crews for the front line Chinook squadrons (7, 18 and 27) based at RAF Odiham, Hampshire and Puma-equipped No.33 and 230 Squadron at RAF Benson, Oxfordshire.

Some of the Fuerza Aerea Portuguesa’s Alpha Jets retain the colours of the Asas de Portugal display team.

Alpha Jet 15211 from Esquadra 103 ‘Caracois’ is painted in a colour scheme to commemorate the unit’s 50th anniversary.

This Brussels Airlines Airbus A320-214 OO-SNA (msn 1441), seen departing Brussels, has been repainted into a scheme highlighting the involvement of the Belgian national football team, the Diables Rouge (Red Devils), in the Euro 2016 championships.

Saudi Arabian Airlines Boeing 787-9 HZ-ARC (c/n 41546) taxiing at Manchester, one of several destinations where the Middle East carrier has deployed its new Dreamliners. Saudia is also flying the type to Guangzhou and Paris CDG.

For decades, former airliners such as the Douglas DC-4, DC-6, and DC-7 have dominated what is now known as the large air tanker (LAT) category. Today the LAT platforms of choice are the BAe 146 and Avro RJ85. Both of these four engine jets can operate from smaller airfields to deliver a payload of 3,000 US gallons (11,356 litres). Owned by Aero-Flite of Spokane, Washington, this RJ85A N354AC, Tanker #161, shows the distinguishing cheek tanks that differentiate it from internal tanks on the BAe 146 tanker.

To be built in Romania with a rollout in 2017, Airbus Helicopters H215 (Model AS332 C1) made the final stop of its US Demo Tour at McClellan Field for AFF 2016. This latest example in the Super Puma/Cougar series is powered by two 1,877shp (187kW) Turbomeca Makila 1A1 engines that give it the ability to lift a 9,920 lb (4,499 kg) external sling load. Internally the utility version can carry 20 fully equipped firefighters, while a slightly longer model has seats for 22.

The full spectrum of fixed-wing firefighting aircraft was represented at AFF 2016 ranging from the Amphibious Air Tractor AT-802F single engine air tanker (SEAT) in the foreground, to the Boeing 747-446 very large air tanker in the background. The land based AT-802F has a 800 gallon (3,028 litre) capacity tank, while the amphibious Fire Boss model can operate between 600 and 800 gallons (2,271 - 3,028 litres) per load. If a fire is located a mile or less from a water source the amphibious 802F can deliver 14,000 gallons (52,995 litres) over a one-hour period.

Cathay Pacific Airways’ first A350-900 F-WZFX (msn 29), which will become B-LRA, taking off on its first flight from Toulouse. The airline will initially use the aircraft on routes to Bangkok, Ho Chi Minh City, Manila and Taipei.

Eight US Army AH-64D Apaches assigned to 1-3rd AVN operated out of a Forward Aerial Refuelling Point within the German training area at Grafenwohr between March 31 and April 5, 2016. The AH-64D shown, serial number 08-05543 has an iron cross, the German Bundeswehr’s national insignia on its engine cowling.

Electronic Attack Squadron 135 (VAQ-135) ‘Black Ravens' is one of three EA-18G Growler-equipped expeditionary squadrons assigned to the Electronic Attack Wing based at Naval Air Station Whidbey Island, Washington. As such, the squadron is not assigned to a carrier air wing. The Black Ravens' last deployment lasted for six-months to the Pacific Command operating primarily from Misawa Air Base, Japan. The squadron's latest CAG-bird BuNo 166940/NL520 is seen at Naval Air Station Fallon, Nevada in early March 2016.

Tanker #260 is the latest version of the Bombardier CL-415 SuperScooper that was developed from the Canadair line of CL-215 Scooper amphibious firefighting aircraft. Tanker #260 is one of four new purpose-built SuperScoopers for Aero-Flite, which is the largest private operator of the type. Able to fill its 1,621 US gallon (6,136 litre) tank in only 12 seconds from a water source as shallow as 6.5ft (1.9m) deep and 300ft (91m) wide, the CL-415 is also capable of delivering foam and retardants from air attack bases.

Owned by the State of Colorado, and operated by their Department of Public Safety, Pilatus PC-12 N327SF (c/n 511) has been fitted with Sierra Nevada Corporation's Wildland Fire Management System. Using electro-optical and infrared systems with geospatial processing, this multi-mission aircraft goes from the early detection and mapping of wildfires to safety overwatch of communities and firefighters. With the high performance and long range of the PC-12 it also provides command and control of the air attack forces being employed to fight the fire that includes evaluation of the effectiveness of the retardant drops.

The world's largest aerial firefighting aircraft made its debut at the Aerial Firefighting International Conference, held on March 22-23, 2016 at McClellan Field in Sacramento, California. Built for Japan Airlines as JA8086, Boeing 747-446 BCF (c/n 25308) had flown as N492EV for Evergreen Airlines before being obtained by Global SuperTanker Services of Colorado Springs. Global also purchased the retardant systems, Supplemental Type Certificate, and patents that Evergreen had owned. The 19,600 US gallon (74,194 litre) system features eight constant flow retardant dispersal tanks that came out of the 747-273C that Evergreen operated as Tanker #947. The new tanker is registered N744ST and will fly as Tanker #944 with the name Spirit of John Muir.

The full spectrum of fixed-wing firefighting aircraft was represented at AFF 2016 ranging from the Amphibious Air Tractor AT-802F single engine air tanker (SEAT) in the foreground, to the Boeing 747-446 very large air tanker in the background. The land based AT-802F has a 800 gallon (3,028 litre) capacity tank, while the amphibious Fire Boss model can operate between 600 and 800 gallons (2,271 - 3,028 litres) per load. If a fire is located a mile or less from a water source the amphibious 802F can deliver 14,000 gallons (52,995 litres) over a one-hour period.

Another state-of-the-art helicopter on display was the Bell Helicopter Textron 412EPI that features the Bell BasiX-Pro Integrated Avionic System with four high-res LCD multi-function displays for full IFR flight capabilities, along with a Garmin GTN-750 navigation system. The upgraded P&W PT6T-9 engines, each generating 1,800 shp (180 kW), gives the 412EPI 4,500 lbs (2,041 kg) of external load lifting capacity, with interior seating for up to 14 passengers.

The French Army will receive 14 Sagem Patroller tactical UAVs by 2018, which will replace the Sperwer systems used by the 61st Artillery Regiment.

Tecnam rolled out its latest product, the 11-seat P2012 Traveller, whose first customer is the US regional airline Cape Air.

A computer-generated image of the An-132D.

TAP Portugal has been confirmed as the launch operator of the A330-900neo, which is due to fly early next year. The airline will also be the launch customer for the newly unveiled Airspace cabin.