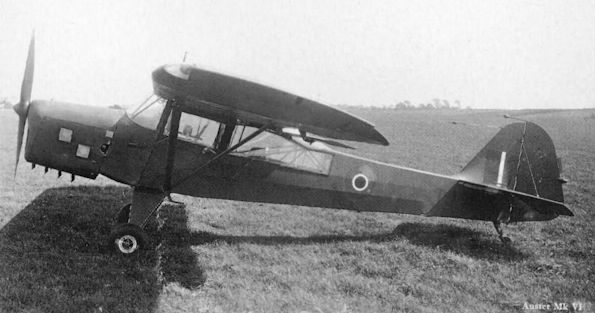 
Beagle A.61 Terrier (incl 6A Tugmaster) (UK)
Produced by completely rebuilding and furnishing to new high standards ex-army Auster AOP.6 and T.7 monoplanes. The 6A Tugmaster and Terrier 1 were also rebuilt Auster Mk 6s, but to lower standards. First flight of a Terrier Series 2 was made on 25 April 1962. The type is a three-seat touring and training monoplane.

TJ707 was converted from a Mk.V and tested at Boscombe Down in August 1945.

The Arab Legion Air Force operated four different Auster variants - A-406 was one of four Mk.6s.

The Mk.6 (VF484, right) and Mk.9 (WZ679, left) were the main variants transferred from the RAF to the AAC when it took over responsibility for the light aircraft fleet.

Canada's Auster AOP.6s reportedly had a longer undercarriage than aircraft built for the RAF. Like the majority of the country's Austers, 16657 did not display roundels on its fuselage sides. 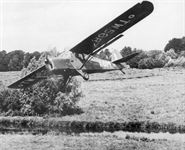 Taylorcraft Auster AOP VI TW568 from Middle Wallop, photographed from a Tiger Moth in August 1952 over the Salisbury Plain area.

The majority of the Mk.6s with the regular AOP flights and squadrons carried no code markings, but examples used for communications did. VF620 has a message hook stowed under the rear fuselage. (Or perhaps glider hook? - ed)

Belgium’s Auster AOP.6s were operated in either a silver scheme - as seen on A6 - or a green and brown camouflage.

'Gipsy Major Austers' were flown by the SAAF until the mid-1960s - 5410 was one of five delivered to the union.

Alongside the T.7 trainers, AOP.6s (including VF661) were used by 227 (Air Observation Post) Conversion Unit, the successor to 227 OCU, to train future AOP pilots. Later, it served in Northern Ireland.

VF661 was based at Aldergrove in Northern Ireland and used on anti-terrorist patrols. It was equipped with the modified exhaust system fitted to some Mk.6 and most T.7s.

Capt N. Baldwick ahead of another Auster in his Army Auster 6. Baldwick averaged a creditable 125 m.p.h. in the Osram Cup race and was placed first.

Auster 6A G-ARHM, Cranfield-based, visited Finmere 6/3/77 after a two-year rebuild;

AOP.Mk.6 VF618 was equipped with a modified undercarriage arrangement and skis. What can readers tell us of its ship-borne use?

The Auster S was offered as a replacement for the AOP.6, although it is best thought of as a link between the variant and the Mk.9. The obvious difference from the Mk.6 was the Bombardier 702 engine.
Auster 7 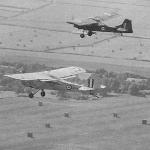 Auster T.7 WE569 (G-ASAJ), nearest the camera, follows AOP.6 TW536 (G-BNGE) during a training sortie over the Hampshire countryside prior to AOP 50.

The Antarctic T.Mk.7(Mod)s differed externally from the standard aircraft by having a universal undercarriage for wheels, skis or floats, and a radome for direction-finding equipment above the cabin. (WE563 illustrated, later became NZ1707 of the RNZAF).

One of two specially modified all-yellow Auster A.O.P. Mk.7s which are now on M.V. Theron heading towards the Antarctic.They will be used on the joint U.K./N.Z./Australian and South African trans-Antarctic expedition.

As the T.Mk.7 was identical to the AOP.6, except for the provision for dual controls, it could be used operationally. WE591 in company with US Army Cessna L-19 Bird Dogs and Bell OH-13 Sioux.

Two Auster T.7s lined up on the grass at Middle Wallop for AOP 50. The nearest aircraft VF526 has just completed a total rebuild by Ron Eastman, engineer with the Museum of Army Flying.

Shipped to Antarctica on board the research vessel Magga Dan - which left London on 15th November 1956 were the orange-and-black-painted de Havilland DHC-3 Otter (XL710) and the orange Auster AOP Mk. 7 (WE600). The latter accompanied the Antarctica expedition of the last winter.

The prototype Auster T.7 VF665 on display at the SBAC airshow at Farnborough in 1948. It was later drastically modified as the Marshall MA.4.

Current configuration of Marshall M A.4 after drag-reduction programme

Little has been released concerning the flight test programme of the Marshall MA.4. It was destroyed in a fatal crash on March 8, 1966.

The prototype Auster T.7 VF665 was used as a trials aircraft for most of its existence, including assessing the Bonmartini undercarriage. 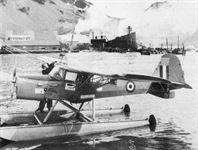 One of the two Auster T.7s, WE600, fitted with floats and used on the Trans Antarctic Expedition in 1956, at Husvik Harbour, South Georgia.
Model H glider

The author’s painting of Capt Baldwick’s Auster 6 heading out over Rock Farm on the first leg of the short course, hotly pursued by John Hill in Tipsy Belfair G-AFJR.