The first French-built Fouga Magister was recently delivered to the Luftwaffe.

SHORT CIRCUITS & BUMPS. Taking the prize for the "Dak with the mostest" is this U.S. Navy Douglas R4D-6Q (Q for Electronic Devices) utilised as a flying classroom for Radar Observer training. Note the thimble-nose radome, two ventral radomes and the just-visible dorsal radome immediately behind the cockpit. Under each wing (starboard carrier shown) may be mounted an additional radar pack. Just forward of the tailplane is the coding FAETULANT.

"Deep-Freeze" aircraft are in the news and these photographs, Auster and Beaver (photo), come from reader D. P. Woodhall, of New Zealand.

The first Dutch Armstrong Whitworth Sea Hawk in Royal Netherlands Navy insignia was F-50, which is seen during a check flight from Bitteswell prior to delivery on July 19, 1957.

According to Japanese reports this drawing depicts the North American F-100J, which may be built under licence in Japan. Note the F-86D type radar on the intake.

The Expediter, G-APBX, in its smart blue-and-silver livery, has now returned to Hurn, home base of its owners, Independent Air Travel Ltd.

American owned and crewed and Canadian registered is this converted PBY-5A, which is operated by the Hycon Aerial Surveys Company of California, U.S.A.

Sycamore - in service throughout the world and in quantity production

Rare bird is this Siskin Mk. IIIA of the R.C.A.F. According to Mr. Stone, this aircraft was one of eight serving as trainers.

THE ENGLISH ELECTRIC P.1B ordered for the Royal Air Force is powered by ROLLS-ROYCE AVON TURBO JETS
Banked view of the P.1B reveals modified main-wheel doors and basic similarity of planform to P.1A. 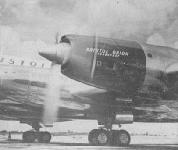 One of the two G.E.C. equipped galleys in the B.O.A.C. Britannia

Convair 440 Metropolitans of many nationalities now grace the tarmac at British airports, among the latest being EC-AMR to 'MV of the Spanish airline Iberia.

The advent of the stand-off bomb (air-to-ground missile, for despatch several hundred miles from a target) actually enhances the vital role of the Valiant and other V-bombers for many years to come. 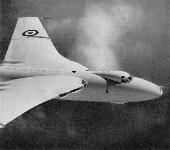 Powered by four Rolls-Royce Avon engines, this medium bomber is now in full squadron service with the Royal Air Force. 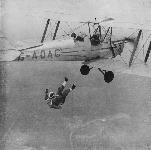 Her last hand hold gone, parachuting instructress Sue Burges calmly counts off the seconds before pulling her ripcord. Between her and the ground, which is only 13 seconds away, is a G.Q. Blank-Gore steerable parachute - internationally acknowledged to be the finest equipment of its type in the world.

The Navy's Tiger Tug at the Lasham Gliding Championships, serial A17-84

Sudan nationality marks have now been changed from SN to ST, and the Sudan Airways Dove, ST-AAD (c/n. 04036, ex-SN-AAD, ex-G-AJOS), is an early example. It passed through Blackbushe en route to Lasham for overhaul during the month.

Prestwick, is the camera-ship used during the air sequences in many famous aviation films.

Jet Provost. The only jet trainer in the world to have been accepted for ab initio and basic military flying training, the Jet Provost has been ordered into production for the Royal Air Force.

AERFER SAGITTARIO II. The Aerfer Sagittario II has a rather complicated history, which began in 1953 when Ing. Sergio Stefanutti designed and Ambrosini constructed the Sagittario I, an experimental research aircraft to provide data for a projected transonic jet fighter known as the Vindex. The Sagittario I was basically the fuselage of the S.A.I.7 piston-engined two-seat trainer, plus a new 45-degree swept-wing and swept tail surfaces. With the piston engine replaced by an 836 lb. thrust Turbomeca Marbore II turbojet, a speed of Mach 1.05 was claimed for this aircraft, which is doubtful in view of the limitations imposed by the wooden structure. It was intended to build further prototypes of all-metal construction, but the Vindex project was abandoned and the manufacturers began to consider the Sagittario design for the light fighter role. A 3,600-lb. Rolls-Royce Derwent 9 turbojet was selected and design work started on a redesigned aircraft known as the Sagittario II. At this stage the design was taken over by the Aerfer concern and the project renamed Ariete. A contract worth §1.3 million has been placed by the U.S. and Italian Governments with Aerfer for the Ariete lightweight fighter-bomber, designed to meet the N.A.T.O. specification for this class of aircraft. Three prototypes of the Ariete are on order, and it is essentially similar to the Sagittario II, but will have the Derwent 9 plus a single 1,180-lb. thrust Rolls-Royce Soar turbojet for take-off, climb and combat. Proposed armament will consist of two 30-mm. cannon, plus various underwing ordnance loads. The Sagittario II, now serving as a prototype for the Ariete now under construction, can attain Mach 1.1 in a dive and climb to 40,000 ft. in ten minutes.

ATL 90 ACCOUNTANT. First flight of the Aviation Traders' Accountant prototype took place from Southend Airport on 9th July, and it was a long awaited moment for "Spotters" and registration enthusiasts. Apart from the high setting of the nacelles for the Rolls-Royce Dart turboprop engines, the Accountant is an orthodox, twin-engined passenger/executive aircraft in the Fokker Friendship class. The prototype is to be fitted out as a twenty-eight-seater with four-abreast seating, which can readily be replaced by an executive layout having two three-seat settees, in addition to eight passenger seats. It is also convertible to a freighter or combined passenger/freighter. A later version known as the ATL 91 Accountant, Mk. II, has been planned and will have accommodation for forty passengers for short-haul operations. Fuselage of this version will be stretched by 10 ft. The prototype fuselage is built on the tension-skin method of construction pioneered by Aviation Traders. This will not be continued in subsequent aircraft, and two pre-production aircraft now under construction will have fuselages with a flush-riveted skin over conventional frames and stringers. The distinctive "kink" aft of the pilot's cockpit will also disappear into a smooth contour. The steerable forward-retracting nosewheel gear protrudes slightly in the retracted position and should protect the nose if a wheels-up landing has to be made.
Salient features: A twin-engined low-wing single fin and rudder passenger and freight aircraft with distinctive engine nacelles mounted high on the wing. From the side view the massive fin dominates the fuselage with its large strakes on the leading and trailing edges. 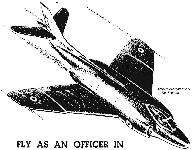 The Brantly B-2 in its latest configuration in which the tail rotor has been elevated on an arm as opposed to the fuselage fitted rotor on the first prototype. Also new is the skid-type under-carriage and the square window just aft of the first circular window. Note the drooping main rotor blades.

The Breguet 1001 Taon which took to the air for the first time on 26th July. Otherwise similar to the twin Turbomeca Gazibo-powered Breguet 1100, the Taon is powered by a Bristol Orpheus turbojet. 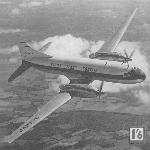 First of the 41 leading airlines operating Convairliners to discard piston engines for turboprops is REAL S.A. of Brazil - seventh largest commercial transport operator in the world. Britian secures the initial $2,000,000 contract through the enterprise of D. Napier & Son Ltd., whose 3500-e.h.p. Eland N.El. 6s will power initially three Convair 340 turboprop conversions by the end of 1958.

Livery borne by the first Luftwaffe Pembroke C.54, AS-551, are becoming increasingly familiar. The units figure of the German coding gives a useful clue to the position of an aircraft in its production batch.

In service with the Air Forces of seven nations, the Pembroke is a versatile general purpose military transport. Passenger seats are quickly removable for conversion to the roles of freight carrying, supply dropping, ambulance, aerial survey, or flying classroom.

Several series ahead of current British registrations, Prentice I, G-APHP, ex-VS757, is now at Stansted with a number of its contemporaries.

IAR-813. Since the end of World War II and the resultant "Iron Curtain" news blackout created by the tight Russian control, information relating to Rumanian aircraft and aviation activities has been sparse. Now comes news of an attractive, if conventional-looking side-by-side, two-seat sportsplane, the IAR-813. The design of the IAR-813 was worked on in 1955 and in turn stems from the IAR-811 which has been in production since 1949 at the State Aircraft Factory (lAR - Industria Aeronautica Romana) at the pre-war plant at Brasov. The design engineers are stated to be Ing. Cosoianu, Grosu and Manicatide.
Construction of the IAR-813 is of mixed wood and steel tube, with a single-spar wooden wing and fixed, tailwheel-type undercarriage. Landing flaps are fitted, and dual controls provided. The powerplant is an imported Czech-built Walter Minor 6-III inverted inline engine driving a two-blade, fixed-pitch wooden airscrew. At 2,500 r.p.m. this 6-cylinder engine delivers a rated power at sea-level of 160 b.h.p.
The IAR State Aircraft Factory is no newcomer, having been founded as long ago as 1925 - some two years after the other pre-war aircraft company S.E.T. (Fabrica de Avione S.E.T.) of Bucharest. Both companies manufactured aircraft of original design; trainers (civil and military), fighter biplanes and monoplanes. However, IAR also went in for licence construction, mainly Polish, French and U.S. designs, and this tradition appears to have been maintained to this date. During World War II IAR switched from fighter production (Polish PZL P.XIBs and P.24Fs) to bomber production (the Italian two-motor S.M.89B) under the Axis Tripartite Pact of 1940. Since the Russian domination of Rumania IAR has built training aircraft under licence from Czechoslovakia including the Zlin Z.381 (German Bucker Bu 181 Bestmann) which, as a side-by-side low-wing primary trainer, may have inspired the IAR-813. A post-war Czech design, the tandem-seat primary Zlin Z.26 low-wing monoplane has also been in production for the aero clubs.

LAZAROV LAZ-7M. For the first time Air Pictorial publishes a silhouette of a Bulgarian aircraft - the Lazarov LAZ-7M two-seat primary trainer and glider tug, which is in extensive use with the national aero clubs. The prototype LAZ-7 of 1946 was the first post-war design to be built in Bulgaria, and owes its origin to a general specification issued by another Communist state, Yugoslavia. The LAZ-7 was matched against the Yugoslavian Aero 2, which was flown for the first time on 19th October 1946. Both the prototype LAZ-7 and the Aero 2S were powered by the Czech 160-h.p. Walter Minor 6-III air-cooled, six-cylinder, inverted inline engine, and in the eliminating trials the LAZ-7 competed successfully. The decision was then taken to build the LAZ-7 in series production at the Bulgarian State Aircraft Works, and to replace the Czech Walter inline with a Russian-designed M-11FR air-cooled, five-cylinder, radial engine driving a controllable-pitch, two-blade Visch V-501 airscrew - also of Russian origin. The production LAZ-7M, designed by Ing. Professor C. Lazarov, bears a marked resemblance to its Russian counterpart, the Yakovlev YaK-18. Two contributing design factors are the common use of the M-11FR radial in the characteristic "helmeted" cowling - although that of the LAZ-7M is of slightly larger diameter - and the adoption by Ing. Professor Lazarov of the YaK-18-type tandem-seat cockpit canopy. Otherwise the design is quite conventional. The fuselage construction is of welded steel tube and wood, and covered with fabric. Both the wing and tailplane are fully cantilever, of mixed wood and metal construction, and fabric covered. Both the main undercarriage and tailwheel are fixed.