AVIA 14. The Avia 14 is the Czech-built Ilyushin IL-14, which is itself a development of the IL-12. The 14 differs externally from the 12 mainly in that it has a revised fin and rudder configuration, square instead of round wingtips and some thrust augmentation to its later series engines, similar to that employed on the Convair-Liner. Short field performance for the Avia 14 is claimed by the manufacturers and take-off and landing figures of less than 2,000 ft. on grass or unimproved fields are quoted. It is claimed to be capable of taking-off and attaining cruising altitude with normal payload on one engine. The aircraft is available in many versions including interior layouts for twenty-four, twenty-eight and thirty-two passengers, as well as a twelve-seat executive and V.I.P. version. A large galley is part of the standard equipment and the cabin is not pressurised but is ventilated and heated in normal fashion. Powerplants are two M-82T 14-cylinder direct-injection radial engines rated at 1,900 h.p. each for take-off. These engines are identical to the ASh-82FNVs used on the Russian IL-14. Propellers are four-bladed AV 50s. Hot-air de-icing is used for wing and tailplane leading edges and cockpit windows, the latter are also electrically heated and fitted with alcohol sprays.
Salient features: Twin-engined low-wing single fin and rudder passenger/freight aircraft with various interior layouts.

One of the few remaining Blenheims is still flying in Finland.

The ill-fated Maritime Central Skymaster, CF-MCF, shown here at L.A.P. on 10/8/57, was totally destroyed with the loss of seventy-nine lives in a crash eighteen miles south-west of Quebec on the following day.

The U.S. Navy is adopting a new system of colour schemes. Photograph, by William Larkins, shows a North American FJ-4B.

A Navy HSS (Sikorsky S-58), the first production helicopter to be powered by twin gas turbines in the States

Colourful Oriental military aircraft now in evidence include 430, one of a batch of Providers for the Royal Saudi Air Force, seen as far afield as Prestwick, Croydon and Bahrein.

Provisional drawing of the Antonov AN-10 Ukraina turboprop transport.

EXCLUSIVE Air Pictorial drawing of the Bee Aviation Queen Bee which will make its first flight soon. Three aircraft are under construction. Span 32ft. 10 in., length 22 ft. 1 in., height 8 ft. 5 in.

WESTLAND WESSEX. The free-turbine is an extremely flexible engine and many helicopter manufacturers are adopting it as a powerplant. This type of engine is used on the Bell H-40 (HU-1 Iroquois), and many others. As is well known, Westland Aircraft have been building Sikorsky helicopters under licence for some time now, and the latest Westland product is the Wessex, a much-developed version of the Sikorsky S-58. It is now in production for the Royal Navy for anti-submarine duties, and will also be suitable for search and rescue, communications and supply, training, and casualty evacuation. Civil versions of the machine are planned, and these will have room for twelve passengers in three pairs of seats and two three-abreast seats. An ambulance version will have accommodation for eight stretchers and an attendant. The prototype Wessex is powered temporarily by a 1,100-s.h.p. Napier NGa.11 Gazelle free-turbine engine, but it is planned to replace this later with the NGa.13 of 1,450 s.h.p. Production models will all have the more powerful engine. The Sikorsky S.58, from which the Wessex was developed, was imported into this country last year, and the original Wright R-1820-84 piston engine of 1,525 h.p. was replaced by the Gazelle. With this engine the Wessex made its first flight on 17th May last, a flight that lasted 1 hr. 5 min., during which time the machine handled perfectly. A start-from-cold-to-airborne time of 30 seconds is possible with the Gazelle, and owing to the free-turbine power and the absence of a clutch in the transmission the rotor can be accelerated from zero to take-off in 15 seconds. These figures are a huge improvement on the five-to-ten-minute warm-up period needed by the Wright engine. Rotor acceleration is also slower.

SAUNDERS-ROE SR.53. One of the highlights of the S.B.A.C. show at Farnborough last month was the appearance of the Saunders-Roe SR.53 mixed-powerplant research interceptor. Two of these aircraft were shown, XD151 statically, and XD145 which took part in the flying display. The SR.53 has been designed to investigate the possibilities of supersonic mixed-power fighters, and it is powered by an Armstrong Siddeley Viper (possibly the ASV.8) in the upper position and a de Havilland Spectre rocket motor in the lower position. Both XD145 and XD151 carry de Havilland Firestreak air-to-air missiles on the wingtips on a very clean mounting. The Firestreaks on XD151 were finished white overall, while those on XD145 had a white body and red wings and fins. The delta wing is fitted with ailerons, slotted flaps and a drooping leading edge. The flying tailplane has a small elevator flanked by small fences. Main units of the Dowty undercarriage are extremely thin and retract into the wing. The track is wide and offers good stability for ground manoeuvring. A large H.T.P. jettison pipe is situated about half-way along the under-fuselage, and all H.T.P. access-points are marked with a red half-moon. Prominent on the nose just ahead of the windscreen is a large fairing housing a cine-gun. A drag or anti-spin parachute is housed in a container on top of the tailplane in the same manner as that fitted to the prototype Javelin.

Dutch Rapide V-3 is now based at Schiphol and still in use by K.L.M. for photographic purposes as PH-OTA "Gelderland".

V-2, which became G-APBJ, still stands unconverted in the open at Croydon.

The adjacent Changes of Ownership include the Hornet Moth, G-AMZO. This is one of the most interesting current light planes, having belonged to the Malayan Aero Club as VR-RAI in 1936, sold in Denmark where it remained as OY-DEZ until 1942, and finally sold in Sweden as SE-ALD until registered in the U.K. in the summer of 1952.

Another rarity is this Me 108, photographed by Frank C. Hartman.

The remains of the Miles M.37 advanced trainer now lie mouldering in an orchard at Cheltenham.

The adjacent Changes of Ownership include Viking I, G-AHOS "Sirius", resplendent in the green livery of Orion Airways

G-AMAD, first of the former B.E.A.C. Ambassadors sold to a British operator, is now flying on the B.K.S. scheduled service from Woolsington to Dublin. 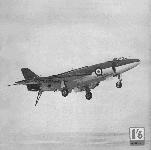 One of the star turns at this year's S.B.A.C. show was undoubtedly the Supermarine Scimitar (XD212), which is seen here with everything down including flaps, undercarriage and hook.

In the U.S.A.F. Museum is this Republic XF-91. Note the modified nose which would have contained rockets.

MOONEY MARK 20. Developed from the M-18C Wee Scotsman, the Mooney Mark 20 is basically a scaled-up version of the 18C with many improvements. Like the 18C, the Mark 20 embodies the Mooney "Safe-Trim" control which comprises a gear linking the tail trim with the wing flaps so as to establish automatically proper settings for take-off, climb, approach and landing. For aerodynamic efficiency the Mark 20 is a leader in the single-engined aircraft field. With its modified laminar-flow wing and fabric-covered plywood skin, finished with dope to get a smooth surface, drag is at a minimum. This model of the Mark 20 differs in detail to the early models, mostly in interior decoration and fittings. The exhaust system is different, as is the positioning of the fuel tanks.
Salient features: A four-seat, low-wing, single-engine cabin monoplane, which has a distinctive forward-leaning fin. The fully-retractable tricycle undercarriage has a steerable nosewheel and is hand-operated.

The unique U.S.-registered Chipmunk, N9867F was delivered to owner Sam Pratt in Dublin 9/7/56, but is now owned by W. S. Shackleton Ltd., at Kidlington.

MODIFIED CANBERRA is WT327 with radar installations in their noses. The sharp nose of WT327 gives the aircraft a more aggressive look.