AgustaWestland AW101 Mk 641 ZR344 (c/n 50251) is one of two destined for the Nigerian Air Force. It will be delivered as NAF280 and is expected to serve with the 101 Presidential Air Fleet at Abuja. The helicopter was noted making what is understood to be its maiden flight at Yeovil, Somerset, on September 19. It was originally due to be handed over to the Indian Air Force (as ZW-3407) to fulfil its WIP requirement, before that programme was cancelled and the airframe reassigned. 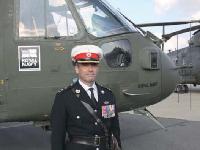 No.846 Naval Air Squadron became a frontline squadron again following its formal stand-up ceremony at RAF Benson on September 30, 2014. On display were two of the Merlin HC3s that transitioned to the squadron.

US Customs and Border Protection (CBP) Lockheed - P-3B AEW&C Orion N144CS (c/n 5242, ex BuNo 153446) was redelivered on September 23, 2014 after Mid-Life Upgrade (MLU) work undertaken by Lockheed Martin. MLU adds new avionics and an update of the airborne early warning system's computers. The aircraft is the tenth of 14 CBP Orions to be modernised, including a mixture of AEW&C and 'slick' aircraft.

Tornado GR4 ZD844/‘107' of No. 15(R) Squadron acquired special tail markings to celebrate the 40th anniversary of the first flight of the then Panavia Multi-Role Combat Aircraft. An event was held on September 16, 2014 at Manching in Germany - from where the prototype made its maiden flight - during which specially-marked German, Italian and British Tornados flew in formation.

A ceremony was held at Manching airfield in Germany on September 16, 2014 to celebrate the 40th anniversary of the first flight of the Panavia Tornado. Tornado IDS 44+61, from Taktisches Luftwaffengeschwader 33, was painted to represent the first prototype Multi-Role Combat Aircraft (P01, D-9591), later named the Tornado. The specially-painted aircraft, accompanied by Italian and British examples with 40th year markings on their tails, performed a three-ship formation flypast at the event. P01 completed its maiden flight from Manching on August 14, 1974.

A pilot assigned to the 27th Expeditionary Fighter Squadron climbs into an F-22 Raptor at Al Dhafra Air Base. The unit deployed to the US Central Command area of operations in late March 2014. 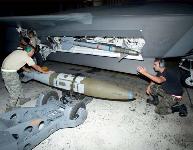 An F-22 Raptor taxies to the runway prior to strike operations in Syria on September 23, 2014. These aircraft were part of a large coalition strike package that was the first to strike ISIL targets in Syria.

Could the US Air Force be pursuing a new powerplant for the B-52H fleet?

Troops run towards Lockheed C-130B Hercules 402 (c/n 3749) of 28 Squadron. The transport carries artwork on the tail to commemorate ‘20 Years of Freedom’ since the end of the apartheid regime.

Eurofighter Typhoon 30+47 has received tail art to mark ten years of operations by the type in Luftwaffe service. The fighter is assigned to Taktisches Luftwaffengeschwader 73 Steinhoff’, based at Rostock-Laage. The unit received its first Typhoon on April 30, 2004.

ICH-47F trials aircraft MM81778/‘EI-701' at Vergiate on October 2, 2014 during the official handover ceremony of the first aircraft to the Aviazione dell’Esercito.

Dassault Alpha Jet 1B+ AT-29 (c/n B2901139) has received special markings to celebrate two significant milestones by the type within the Composante Aerienne (Belgium Defence - Air Component). The starboard side of the tail commemorates 35 years of service with Belgium. On the other side, the aircraft wears artwork to mark the tenth anniversary of the formation of the Advanced Jet Training School, based at Cazaux in southern France.

MQ-4C Triton BuNo 168457 during the final stage of its inaugural cross­country ferry flight near Naval Air Station Patuxent River. The aircraft took off from the Northrop Grumman facility at Palmdale on September 17, 2014.

ATR 42-600 F-WWLX (msn 1015) - delivered to TransNusa Aviation Mandiri of Indonesia as PK-TNJ on September 29, 2014 - on test at Toulouse-Blagnac in southern France on September 22, a week after its first flight. TransNusa ordered a single ATR 42-600 and placed options for a further three in 2013. The airliner is based at El Tari Airport in Kupang and is expected to begin operating revenue earning flights in November.

The third prototype Airbus Defence and Space A400M Grizzly F-WWMS (msn 003) has been used by RAF crews to undertake training on the type at Seville, Spain. A number of touch-and-goes were conducted on September 11, 2014 with a mixed Airbus and RAF crew. Training with this prototype were carried out for almost a week, until the first RAF A400M (EC-404, to be ZM400) resumed flights on September 15. The service's first Atlas was expected to be handed over in September, but nothing had been confirmed by early October.

Learjet 75 F-HINC is the first of its type delivered to a European operator.

US Army de Havilland Canada EO-5C Airborne Reconnaissance Low - Multi-Mission N53993 (c/n 104) transited through Edinburgh Airport in Scotland on September 20, 2014 before departing later that day for Keflavik in Iceland on its way to the US. EO-5Cs are used to gather communication and imagery intelligence in low-threat areas.

Taking off from Albacete AB on September 19, 2014 is Czech Air Force Aero Vodochody L-159A Advanced Light Combat Aircraft 6063, one of three from 212 Takticka Letka deployed to Spain to participate in TLP flying course 2014-5.

The five Airbus A350-900s used in the certification programme fly in formation on September 29, 2014, the day before the type received approval from EASA.

Elliniki Polemiki Aeroporia (Hellenic Air Force) Beechcraft T-6A Texan II 037 appeared at the Third Athens Flying Week at Tatoi on September 28, 2014. It is operated by 361 Mira Ekpedefseos Aeros (Air Training Squadron) ‘Mystras’ of the 120 Pteriga Ekpedefseos Aeros (Air Training Wing) based at Kalamata. On its tail is a representation of the winged figure from the unit’s badge, with silhouettes of the Texan and the Cessna T-37 previously flown. The artwork was applied for the unit’s 50th anniversary in 2013.

AgustaWestland AW139 N495SH is the 200th example of the medium twin-engined helicopter assembled in the United States. It was recently delivered to Yokohama in Japan.

The Ejercito del Aire (Spanish Air Force) celebrated its 75th anniversary on October 11, 2014 with an airshow at Torrejon AB, Madrid. For the occasion the CASA C101EB Aviojets of Team Aguila wore 75th anniversary logos on the fuselage, as applied to E25-87/‘79-29'. 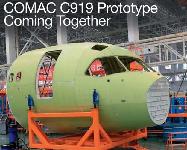 The front fuselage of the prototype COMAC C919 airliner in the final assembly facility at Shanghai Pudong.

Bombardier DHC-8-402 Q400 C-GZDV (c/n 4474) on approach to Toronto Downsview Airport, Ontario, on September 24, 2014. The first of two for Air Cote d’Ivoire, on delivery it will be airline’s first new aircraft - it currently flies three leased Airbus A319s and an Embraer 170. Its order for a pair of Q400s (plus two options), with a two-class cabin configuration, was announced as a conditional purchase agreement on November 18, 2013 and confirmed on December 18.

Boeing 737-8F2(WL) TC-JHY (c/n 42003) of Turkish Airlines carries special titles on its forward fuselage to commemorate 100 years of Turkish cinema - in English on the starboard side and Turkish on the port. The airliner is a relatively new addition to the flag carrier's fleet, having been delivered on February 19, 2014. It was noted at Birmingham Airport in the West Midlands on September 30.

The Paramount AHRLAC (ZS-XDM) made its public debut at the recent Africa Aerospace and Defence 2014 show.

The Paramount Advanced Technologies Mwari shares an external configuration with the manned AHRLAC. 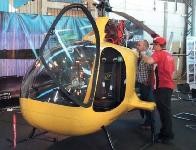 The Fama K209 light helicopter displayed at AAD 2014. The prototype first flew on August 13, 2009. The test pilot was accompanied by a dog.

Australia's first Lockheed Martin F-35A Lightning II A35-001 made its first flight from Naval Air Station Joint Reserve Base Fort Worth, Texas, on its first flight on September 29, 2014. It wears the tail markings of No.2 Operational Conversion Unit.

Strike Fighter Squadron 101 (VFA-101) ‘Grim Reapers' is the F-35C Fleet Replacement Squadron currently based at Eglin Air Force Base in northern Florida. Although unconfirmed, the Grim Reapers are likely to move to NAS Lemoore as per the October 2, 2014 announcement.