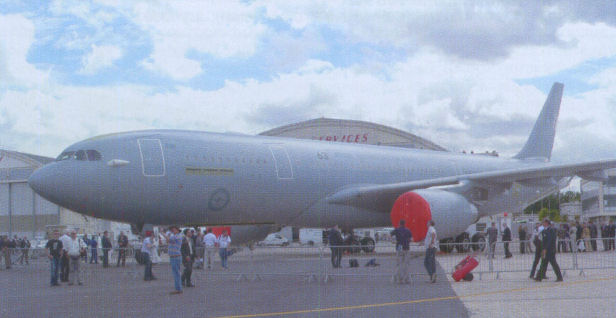 Airbus Military KC-30A A39-005 (msn 1183, ex EC-336) is seen at RAF Brize Norton, Oxfordshire, on November 30, 2012, during its delivery flight to the Royal Australian Air Force (RAAF). The aircraft arrived from Cetafe in Spain and departed on December 1 for Travis AFB, California, finally arriving at RAAF Base Amberley in Queensland for No.33 Squadron two days later. The aircraft is the last of five A330-203 Multi-Role Tanker Transports for the RAAF; the first three were received during 2011 (June 1, June 22 and November 22) and the fourth on January 31, 2012.

A KC-30A at Al Minhad after returning from an Operation Okra mission.

A Royal Australian Air Force Airbus KC-30A Multi-Role Tanker Transport takes off on another mission in support of Australian and coalition aircraft over Iraq and Syria.

Included in the Integrated Investment Plan are the sixth and seventh Airbus KC-30A multi-role tanker transports, which are currently in Getafe awaiting conversion. This 33 Squadron KC-30A is photographed during a training sortie.

Airbus Defence and Space has indicated its intent to bid the A330 MRTT for South Korea's US$1.25 billion aerial refuelling tanker programme, announced in April 2015.

KC-30A A39-005 over the Pacific Ocean on an air-refuelling mission from Andersen AFB, Guam during exercise Cope North in February 2013. All Royal Australian Air Force KC-30As wear No.33 Squadron’s badge featuring a Frigatebird on the tail.

If times get tough for the DoD's KC-46 tanker programme, Airbus does have an alternative ready to go.

An E-7A Wedgetail uploads fuel from a KC-30A tanker during a mission flown in support of Operation Okra.

RAAF E-7A Wedgetail and F/A-18F Super Hornet fly aft of a KC-30A Multi-Role Tanker Transport as they transit to the battlespace as part of Operation Okra, the Australian Defence Force's mission in the Middle East. RAF Voyager tankers don't have a boom refuelling capability.
The Boeing E-7 Wedgetail is perhaps the most likely option being explored by the UK MoD as a replacement for the RAF's Sentry AEW1 airborne warning and control aircraft.

Between June 1 and 13, 2015, the first aerial refuelling trials were conducted between a RAAF KC-30A Multi-Role Tanker Transport and an E-7A Wedgetail Airborne Early Warning and Control aircraft. During the trials, seven sorties were flown by each aircraft and included 118 dry contacts with the KC-30A's refuelling boom, and six wet contacts involving the transfer of 20 tonnes of fuel. The trials were conducted under the direction of the Aircraft Research and Development Unit.

Over the period February 27 to April 14, 2018 members from the Aircraft Research and Development Unit and 33 Squadron deployed to Naval Air Station Patuxent River, Maryland, to undertake clearance testing between the KC-30A and the Poseidon P-8A aircraft. Testing was jointly planned and executed by ARDU and Air Test and Evaluation Squadron 20 (VX-20).

The Royal Australian Air Force KC-30A Multi-Role Tanker Transport undertook its first air refuelling boom contact on May 13, 2015. The three-hour sortie from RAAF Base Amberley saw the crew deploy the 17m-long Aerial Refuelling Boom System, which made 14 successful dry contacts with the refuelling receptacle of another KC-30A. 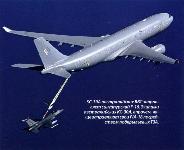 An F/A-18A Hornet assigned to No.3 Squadron Royal Australian Air Force refuels from KC-30A A39-005 over the Pacific Ocean near the island of Guam during this year's exercise Cope North.

Successful deployment to the Middle East.

Royal Australian Air Force F/A-18F Super Hornet A44-217 formates on the port side wing of a KC-30A prior to air refuelling during exercise Talisman Saber 2013.

French Air Force Rafales were the first non-RAAF aircraft to refuel from the KC-30A over Iraq.

An EA-18G Growler from VAQ-132 'Scorpions' takes on fuel from a Royal Australian Air Force KC-30A Multi Role Tanker Transport, an as F/A-18E holds alongside.

RAAF Super Hornets tanking from the KC-30A during their journey to the Middle East.

The Hornets, KC-30A and E-7A represented the first purely air-focused task group sent overseas by the RAAF for several decades.

Voyager KC3 ZZ333 taxies for departure at RAF Brize Norton after the aircraft returned to service on February 21, 2014.

Voyager KC2 ZZ331 taxies back to parking after an air-refuelling mission.

A Voyager KC2 parked on the flight line at RAF Brize Norton during a snowy day in January 2013.

Voyager is available to the RAF around the clock. In August 2013, No.10 Squadron held UK Quick Reaction Alert for the first time.

Voyager KC3 MRTT021/EC-338 (msn 1334, to become ZZ335) was rolled out of the Air Livery hangar at Manchester Airport on May 28 after being painted in RAF colours. It is expected to be the sixth to be delivered to RAF Brize Norton, Oxfordshire. 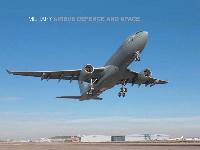 The RAF has now received all nine Voyagers.

A pilot's view of the Sargent Fletcher hose and drogue extended from a 905E wing air refuelling pod.

A Royal Air Force Voyager KC2 refuels two RAF Tornado GR4s on March 4, 2015 over Iraq during operations against ISIL. The RAF has continued to carry out air strikes in Iraq as part of Operation Shader since last October. In addition to the GR4s, Hellfire-armed RAF Reapers are also being used to target ISIL militants in the country.

A common shot taken from an RAF Voyager tanker shows a Typhoon FGR4 plugged into the basket and taking fuel, this one during a Shader mission. Note the bright yellow rings applied to the forward fuselage of the Paveway IV bomb denoting it's a live weapon.

A RAF Voyager from RAF Brize Norton provided air refuelling for all legs of Eastern Venture.

Voyager’s release to service for air refuelling the Typhoon was issued in August 2013. 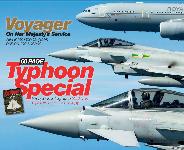 Armee De I'Air Rafale B fighters fly in formation with a 33 Squadron KC-30A tanker en route to Australia to participate in Exercise Pitch Black 2018 at RAAF Base Darwin, Northern Territory.

Royal Air Force Voyager KC2 MRTT027 (msn 1555, ex EX-336, to be ZZ341/G-VYGL) lands at Getafe, Spain, on June 8, 2015. The aircraft was returning from Manching, Germany where it had arrived on May 13 for painting. It was the first A330MRTT to be painted by Airbus Defence and Space at Manching, although others are planned. The aircraft will shortly be delivered to Air Tanker.

'Vespina' supporting regular RAF operations in its traditional AAR refuelling role on June 26, 2020, the day after it returned to service in its new, bespoke paint scheme.
AirTanker

AirTanker’s hangar at RAF Brize Norton can hold two Voyager aircraft and has all of the company’s office spaces, as well as those occupied by No. 10 and No. 101 Squadrons, on the south side of the same building.

Voyager KC2 MRTT026 (msn 1498, G-VYGJ/ZZ340), departing Manchester Airport on January 13, 2015 following a repaint in Thomas Cook colours by Air Livery. The aircraft, from AirTanker's surge capacity fleet for the Royal Air Force, ferried back to Getafe, Spain where it will be de-militarised before delivery to Thomas Cook in May. It was flown to Manchester on December 27, 2014.
South Korea

THE FIRST of four Airbus A330 Multi-Role Tanker Transports was delivered to the Republic of Korea Air Force (RoKAF) in January 2019 and local media reports suggest that the first of the country's Lockheed Martin F-35A Lightning Ils will follow in March 2019.

The first A330-243 MRTT for the Republic of Korea Air Force 16-001 (MRTT050/msn 1787) pictured departing Airbus Defence and Space's facility at Getafe on its delivery flight to Gimhae Air Base.

Flight tests of the third Airbus Military A330-243 Multi-Role Tanker Transport (MRTT) for the United Arab Emirates Air Force and Air Defence should be under way. The aircraft is seen on November 11, 2012, at the manufacturer's facility at Getafe in Spain following conversion from a 'green' airframe, having received the flight test identification MRTT015 (msn 1250, ex EC-332).
Singapore

Singapore's first A330 MRTT seen after painting at Manching, Germany.

Participants in the joint Saudi-Tunisia exercise held at Sidi Ahmed Air Base in Bizerte, Tunisia stand in front of one of the Royal Saudi Air Force's A330 MRTTs that has been specially painted in 'Vision 2030' markings.

Airbus A330-202 EC-337 (msn 1516, ex F-WWKS) will become the sixth Multi-Role Tanker Transport (MRTT) for the Royal Saudi Air Force (as 2406). It is currently being converted to the role at Adolfo Suarez Madrid-Barajas Airport in Spain, the first to be worked on outdoors. The fifth MRTT for Saudi Arabia (EC-338, msn 1478, ex F-WWYT) is meanwhile being equipped in a hangar at the airport.
France

Seen here on short finals to Torrejon Air Base after a two-hour flight from Manching, Germany on July 6, 2018 is Airbus A330 MRTT MRTT041 (msn 1735), resplendent in its full Armee de l’Air colours. The aircraft will make its next series of test flights from Torrejon, because of work on Getafe’s sole runway this summer. It is expected the aircraft will be handed over to the Armee de l’Air before the end of the year.

The third French Air Force Airbus A330 Phenix Multi-Role Tanker Transport, serial number 043 (c/n 1916, ex EC-330, MRTT043), which was delivered four months ahead of schedule. It was accepted by the DGA, the French Defence Procurement Agency, at Base Aerienne 125 Istres on July 10, 2020, having been delivered to there from Getafe, Spain, two days earlier.

Top: Voyager’s camera system improves the situational awareness for the mission systems operator.
Middle and bottom: The Cobham 805E FRU can dispense fuel at a rate of 1,800kg/min, and installed on Voyager KC3s to refuel large receiver aircraft.