Two Afghan National Army Air Corps Mi-35 attack helicopters launch from Kabul, Afghanistan, on a gunnery training mission armed with rockets on May 21, 2009. The mission marked the first time rockets had been flown by the Afghan air corps in more than eight years.

The first three of 12 AgustaWestland AW101-641 Merlin helicopters destined for VIP and presidential flight duties with the Indian Air Force were delivered to India during late December 2012. The aircraft were flown separately from AgustaWestland's manufacturing facility at Yeovil, Somerset to London Stansted, Essex, for onward transportation to India by air. Each wore full Indian Air Force markings with UK test or 'B' class serials applied, with the Indian serials (ZW4303 in the case of ZR340 seen here) located on the upper aircraft boom area taped over. Training of flight crews at the company's facility at Newquay Cornwall Airport was concluded around the time of the first delivery. The remaining nine AW101s on order are scheduled for delivery during 2013.

F-16D Block 50+ 07-1029 was one of the last pair of 16 two-seat Fighting Falcons delivered to Turkey under the Peace Onyx IV programme.

The second NH90 NFH for the Norwegian coast guard (058) shortly after arriving at Maritime Air Station De Kooy in the Netherlands for a night stop on December 2, 2012.

Iraq has taken delivery of Boeing 777-29MLR YI-AQZ (c/n 40993, ex N736FE), the first step by the country to re-establishing its own long-haul services. The airliner departed Boeing Field/King County International Airport, Washington, on December 14, 2012, the first aircraft delivered by the manufacturer to Iraq in more than 30 years. It arrived at Baghdad International Airport the following day. The airliner was originally constructed for Air Austral as F-ORLB but not handed over. Iraq has 30 Boeing 737 Next-Generation and ten 787-8 Dreamliners on order, and expects to take delivery of its first 737 by the middle of this year.

The Scan Eagle sitting on the Super Wedge catapult on the USS San Antonio prior to its first launch on November 28, 2012.

Mil Mi-8AMT RF-28972 was one of two of the type delivered to the Republic of Tatarstan Interior Ministry in December 2012. The second (RF-28971) wears a blue and white scheme, and is visible in the background.

During Airshow China 2012 the CATIC foreign trade company signed a contract with the Hongdu Aviation factory for 12 L-15 advanced jet trainers. CATIC is expected to deliver the 12 aircraft to a foreign client, reportedly Egypt, this year. Hongdu displayed a model of its L-15 combat version armed with PL-9 air-to-air missiles at Airshow China in November 2012.

Five new Sukhoi Su-34 fighter-bombers departed the Novosibirsk Aircraft Production Association on December 25, 2012, for delivery to the Russian Air Force at Voronezh-Baltimor airbase in the Western Military District. A further ten are due to be delivered in 2013.

The first Airbus A320 to enter service with SAS is seen on final approach to runway 24L at Palma de Mallorca Airport after completing flight SAS 585 from Copenhagen in Denmark. A320-232 OY-KAL (msn 2883, ex OE-IBJ) was leased from GECAS from December 10, 2012, having previously served with Indian low-cost carrier IndiGo. It was delivered to Copenhagen on December 17 and entered service with SAS four days later. Nine A320s will join the SAS fleet. 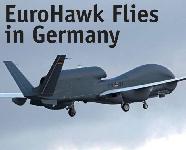 On January 11, 2013, Northrop Grumman/EADS RQ-4E EuroHawk 99+01 (EHS001) completed its first flight from Manching in Germany. The high-altitude long-endurance unmanned air vehicle (UAV) completed a six-hour sortie during which a signals-intelligence package was tested. The flight was the UAV's first since it arrived from Edwards AFB, California, on July 21, 2011. Germany plans to acquire a further four EuroHawks, which will enter service with Aufklarungsgeschwader 51 'Immelmann' (Reconnaissance Wing 51) at Jagel AB in northern Germany. 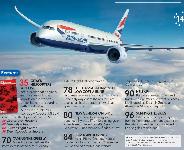 Hawker Siddeley Andover C1(Mod) XS606 of the Empire Test Pilots' School departed MoD Boscombe Down in Wiltshire for the final time on December 19, 2012. The aircraft landed at Bournemouth International Airport in Dorset, where it will be painted in 'United Nations white' colours before departing for a new owner in Nigeria. The aircraft was due to leave Bournemouth in January 2013. It has been replaced at Boscombe Down by an Avro RJ100

A rare and recent visitor to Norwich Airport in Norfolk, was de Havilland Canada DHC-8-102 N1000 (c/n 024) operated by Dynamic Aviation on behalf of the US Army. The aircraft is heavily modified to undertake surveillance missions. It arrived at Norwich from Souda Bay on Crete, via Budapest in Hungary, on November 29, 2012, and departed the following day for the United States via Wick in Scotland.

Although originating from the 1950s, the H-6H, a Chinese version of the Russian Tu-16 bomber, remains in service with the Peoples Liberation Army Air Force. The first H-6 entered PLAAF service as early as 1959 and the Xi'an Aircraft Corporation continues to manufacture new versions of the missile-carrying bomber with improved weapon systems. The H-6H displayed at Zhuhai, one of 120 in service, entered PLAAF service about eight years ago and can carry two YJ-63 anti-ship missiles with a range up to 200km (125 miles).

Making its debut at Airshow China at Zhuhai in the People's Republic of China in November 2012 was the Xian MA600F freighter prototype. The aircraft completed its maiden flight on October 24, 2012. It is equipped with a large freight door on the starboard side of the rear fuselage, as well as a container handling system.

Yakutia received its first Sukhoi Superjet 100 on December 18, 2012. The aircraft (c/n 95019) arrived at Yakutsk Airport in Russia from Ulyanovsk, where it was painted in the airline's colours and had its interior furnishings installed. The carrier, the second Russian airline after Aeroflot to put the Superjet into operation, will use it on flights from Yakutsk to Khabarovsk, Blagoveshchensk, Vladivostok and other cities in the Russian Far East and Siberia. International routes are also planned, with services to Harbin in the People's Republic of China, Niahata in Japan and Seoul in the Republic of (South) Korea under consideration. Yakutia ordered two SSJ-100-95s in August 2009, with the second due to be delivered in the first quarter of 2013.

Sukhoi Superjet 100-95 RDPL-34195 (c/n 95026) is the first example for Lao Central Airlines. It is seen after being painted at Ulyanovsk and is due to be delivered shortly. The carrier ordered three in May 2010 and placed options for a further six, all of which will be configured for 93 passengers.

Work on the first Alenia C-27J Spartan tactical transport for the Royal Australian Air Force is advancing. On December 18, 2012, Alenia Aermacchi announced that the fuselage had arrived at the Turin facility in Italy for final assembly via truck and sea from Capodichino in Naples. Australia ordered ten C-27Js via the US Foreign Military Sales programme in May 2012 and the first (c/n NC179, to become A34-001) will be delivered in early 2015. The fleet will serve with No.35 Squadron.

Noted making its first test flight at Seville-San Pablo Airport in Spain on December 11, 2012, was the second Airbus Military C295M ('02' red, c/n S-096) for the Kazakhstan Air Force. Kazakhstan ordered two of the tactical transports in early 2012 and placed options for a further six. The first ('01' red, c/n S-093) had begun flight tests by November 2012 and deliveries are expected to begin in April.

On January 2, 2013, Airbus Military announced it is testing winglets on the C295 tactical transport. The fuel-saving devices have been flown on EC-295 (c/n P-001), which is also being used as the airborne early warning testbed. The aircraft completed its first flight with winglets on December 21,2012, from Seville-San Pablo Airport in Spain, where it is seen here on January 14. The winglets are expected to improve hot and high runway performance, and increase range, endurance and lower fuel consumption.

Diamond DA42 Twin Star OE-FMP (c/n 42.177) currently being used as a test-bed for fly-by-wire systems as part of the SAFAR project.

The VFW 614 ATTAS at Schleissheim, where it will be preserved. The aircraft arrived on December 7, 2012, marking the end of the flying career of the pioneering German regional jet design.

The Toufan-2 is an upgraded version of the AH-1J Sea Cobra.

Bell 429 C-GTNQ has become the first example of the type for a UK customer. It was recently delivered to the National Grid.

Noted at RAF Mildenhall, Suffolk, on January 9, 2013, was Boeing RC-135W Rivet Joint 62-4130/'OF' of the 55th Wing with a mixed crew of US Air Force and RAF personnel. The aircraft was equipped with the FAB-T (Family of advanced Beyond line-of-sight Terminal), which allows low-data-rate communications to be sent between airborne and ground platforms in flight via a Milstar satellite.

The Boeing H-6U Unmanned Little Bird was demonstrated to the Republic of Korea Army in December 2012.

The first production Eurocopter EC 175 during its maiden flight at Marignane in France in December 2012.

A mock-up of the front fuselage of the JL600 JiaoLong large amphibian was placed on display at the China Aviation Industry General Aircraft (CAIGA) stand.

A computer-generated image of the JL600 JiaoLong large amphibian.

The first three Boeing P-81 Neptunes for the Indian Navy seen together at Boeing Field, Washington, for the handover of the first example to the service. The delivery was undertaken to conform to the timetable originally agreed with Boeing. From left to right they are IN321, IN320 and IN322.

Three Mirage 2000Ds approach a C-135FR tanker during the recent missions over Mali.

KJ200 30176 was parked in the static park at Zhuhai but remained inaccessible to the public. The aircraft is the newest of five currently in service with the People's Liberation Army Air Force (one aircraft crashed in June 2006).

The last of the initial three Lockheed Martin C-130J-30 Hercules for the Iraqi Air Force departs Marietta, Georgia, on December 12, 2012, at the start of its delivery flight

Congolese carrier Canadian Airways Congo has put Wind Rose Aviation McDonnell Douglas MD-82 UR-WRE (c/n 49278, ex UR-CDA) into service on the domestic route between Pointe-Noire and Brazzaville. The airliner is seen at Pointe-Noire on December 12, 2012. It was leased from Wind Rose in September 2012.

Airbus A319-132 D-AGWT (msn 5043, ex D-AVYL) is the first example to be painted in Germanwings' new colours. The airliner is seen arriving at Cologne in Germany on December 19, 2012, from Shannon in Ireland, where the new scheme was applied.

BBJ HB-IIQ of PrivatAir lands at the Troll Research Station on November 28, 2012.

Low-cost carrier Ryanair took delivery in December 2012 of the final pair of Boeing 737-8AS(WL) it had on order. The last to arrive at Dublin Airport in Ireland was EI-EVY (c/n 40319, ex N1796B) which landed there just before 14:00hrs on December 18 at the end of its delivery flight from Boeing Field/King County International Airport, Washington. The deliveries take Ryanair's current fleet to 305 Boeing 737-800s. The carrier placed its last order for ten 737-800s on December 18, 2009.

Lockheed Martin F-35C Lightning II BuNo 168733/'NJ-101' (CF-6) is the first example of the type for the US Navy's Strike Fighter Squadron 101 (VFA-101) 'Grim Reapers'. The aircraft is due to be delivered to Eglin AFB, Florida, where it will be used for training with the multi-service Integrated Training Center operated by the 33rd Fighter Wing. The F-35C will arrive at Eglin by the end of February or early March. VFA-101 previously served as the fleet replenishment squadron for the Grumman F-14 Tomcat before being disestablished in 2005.

Lockheed Martin delivered the final F-35C Lightning II to be used by the Integrated Test Force at NAS Patuxent River, Maryland, on December 11, 2012. The aircraft (CF-5) arrived from Fort Worth, Texas, flown by Lt Cmdr Michael Burks. It will be used primarily for ship suitability and high angle of attack tests.