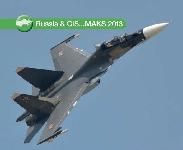 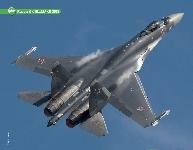 Lockheed NP-3C Orion BuNo 158204/‘204’ (c/n 285A-5548) of Air Test and Evaluation Squadron Twenty (VX-20) based at NAS Patuxent River, Maryland, seen on approach to RAF Fairford, Gloucestershire, on August 21, 2013. The aircraft is used by VX-20 as a test-bed for various systems but the reason for its deployment to the UK was not announced. It departed back to the United States nine days later.

Tornado IDS 7507 taking off from RAF Coningsby during the Green Flag exercise.

Boeing C-17A Globemaster III 10-0223 (bln P-223) has the distinction of being the final example ordered for the US Air Force. It is seen at Long Beach Airport, California, prior to delivery.

Ilyushin Il-76TD Candid RA-76446 (c/n 1023412418, ex EW-76446) of Ceiba Cargo of Equatorial Guinea. The freighter was seen at Chalons Vatry Airport in northeast France. The Candid was flown into the French airport on July 17, 2013, filling in for the carrier's Airbus A300, which was undergoing maintenance.

The N025 radar is currently undergoing testing at the GRPZ facility at Ryazan. Once state acceptance trials are complete, the new radar will be installed on all new-build Mi-28Ns and retrofitted on aircraft already in service with the Russian Air Force. 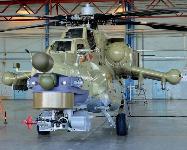 The first prototype Mi-28UB (c/n OP-1), a training version of the Mi-28N, seen at Rostov-on-Don in mid-August.

Embraer EMB-135LR 2112/HS-NVA (c/n 14501077) of 201 Squadron, Wing 2 of the Royal Thai Navy based at U-Tapao International Airport. The aircraft was noted at Glasgow airport on August 23, 2013 on its way from Thailand to Quebec in Canada for maintenance. It was due to return home in late September.

Boeing 727-2S2AF Super 27 G-OSRA (c/n 22938, ex N217FE) was rolled out on September 11, 2013 after repainting by Air Livery at Manchester Airport. The former FedEx Express freighter arrived there from Lasham in Hampshire, on September 2, after flying from Lasham in Hampshire. It was acquired by T2 Aviation and will be equipped as an oil dispersal spraying aircraft. It has the distinction of being the final 727 built.

Assembly of the first Tranche 3A Eurofighter Typhoon (build number BS116, to become ZK355) has been completed. It is due to fly in late September or October 2013. The aircraft was recently weighed at BAE System's facility at Warton, Lancashire, to determine its centre of gravity. The RAF will receive 40 of the 112 Tranche 3 Typhoons ordered by the four original partner nations in 2009.

Temporary markings were applied to Eurofighter Typhoon 30+70 of the Luftwaffe's Jagdgeschwader 74 (Fighter Wing 74) based at Neuburg to mark the type passing 200,000 flight hours with the six air forces that fly it. Eurofighter announced the achievement on September 8, 2013, by which time 378 of the 571 Typhoons ordered had been delivered. Half the flight hours have been accumulated since January 2011.

Antonov An-74TK-100 UNO-051P/RA-74016 (c/n 365470991034) is operated on behalf of the United Nations Multidimensional Integrated Stabilization Mission in Mali (MINUSMA). The new mission was established on April 25, 2013 and took over operations from the African-led International Support Mission in Mali on July 1. It comprises 11,200 military personnel and 1,440 police. At least two An-74s (the other being UNO-51/RA-74032, c/n 36547098962) have supported MINUSMA operations, both provided by UTair. UNO-51P was noted at Bamako-Senou International Airport on September 7. Bamako serves as a base for United Nations operations in Mali.

Northrop Grumman RQ-4E EuroHawk 99+01 completed the longest unmanned air system flight in Europe on August 8, 2013. The air vehicle is seen on approach to Manching AB at the end of the sortie.

Boeing rolled out the first 787-9 Dreamliner on August 24б 2013 at its assembly plant at Everett, Washington, and it has been delivered to the flight line for final preparations before its maiden flight. It was built on the Temporary Surge Line at Everett, which was established to increase the production rate of the airliner. The Dash 9 can carry 40 more passengers than the baseline Dash 8.

The Siberian Scientific and Research Institute for Aviation based at Novosibirsk has modernised the An-2 Colt biplane design. Known as the An-2MS (TVS-2MS), the upgraded aircraft is powered by a Honeywell TPE-331-10 engine and equipped with a Hartzell propeller, additional navigational equipment, and comes with cabin heating. Three An-2MS aircraft were at MAKS 2013 including RA-1573G.

KAI T-50I Golden Eagle TT-5001 is one of the 16 due to be delivered to the Indonesian National Defence-Air Force.

The main landing gear begins to retract on the first Cessna Citation M2 as it lifts off for its maiden flight from Independence, Kansas, on August 23, 2013.

The second prototype AgustaWestland AW609 with the aerodynamic improvements to the vertical tailplane. The original straight trailing edge has been modified with a reduced width section on the lower four-fifths of the fin. The original square-section exhausts have been replaced by circular-section units.

The RAF's IV(R) Squadron, based at Valley on Anglesey, hosted a detachment of six Suomen Ilmavoimat (Finnish Air Force) British Aerospace Hawk Mk 51As from the Training Squadron at Kauhava AB from September 2 to 9, 2013. The aircraft conducted low-level flights over central Wales during their stay. 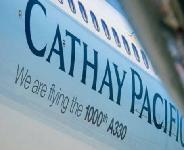 The Sikorsky MATRIX programme makes use of the Sikorsky Autonomous Research Aircraft, a modified S-76B.

Beechcraft flew a production-representative AT-6 on August 20, 2013. Having failed to secure a US Air Force order to supply it to the Afghan Air Force, the company is seeking to market the light armed reconnaissance aircraft internationally. 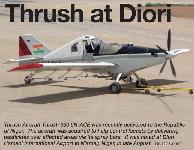 Thrush Aircraft Thrush 660 5N-ACE was recently delivered to the Republic of Niger. The aircraft was acquired to help control locusts by delivering pesticides over affected areas via its spray bars. It was noted at Diori Hamani International Airport in Niamey, Niger, in late August, 2013.

Prototype Bombardier CSeries C-FBCS touches down at Montreal-Mirabel International Airport at the conclusion of its maiden flight on September 16, 2013.

Two Pilatus U-28As of the 319th Special Operations Squadron, 1st Special Operations Wing, are deployed to Stuttgart Airport in Germany to support US African Command. U-28A 07-0793 (c/n 793) was noted operating from the airport on August 12.

Arriving at Little Rock AFB, Arkansas, on August 20, 2013 was Lockheed Martin C-130J-30 Hercules 10-5728 (c/n 5728), the first of five due to be delivered to the base from the manufacturer this year. Little Rock AFB was the first US base to receive C-130Js and accepted its last (prior to the recent delivery) in 2009. It is home to the 314th Airlift Wing (AW), the formal training unit for the C-130J Hercules assigned to Air Education and Training Command (to which this aircraft will be assigned), and the 19th AW of Air Mobility Command, as well as the 189th AW of the Arkansas Air National Guard, both of which also fly Hercules.

Mil Mi-35M (AH-2 Sabre) 8962 is one of the last three examples due to be delivered to the Brazilian Air Force.

Boeing 737-505 HA-SHA, named Almos Vezer (c/n 24648, ex VP-CAJ), is the first airliner for Solyom Hungarian Airlines. The aircraft arrived at Budapest Airport in Hungary on August 18, 2013 on lease from European Skybus. Five additional 737-500s are due from the same source under the terms of an agreement signed in London on July 16.

Departing Shannon Airport in Ireland on September 2, 2013 was Boeing 737-448 N151LF (c/n 25736, ex UR-WM) on its delivery flight to Tajik Air, on lease from the International Lease and Finance Company. The airliner flew from Phoenix Goodyear in Arizona, to Denver, Colorado, and then on to St John's in Newfoundland and Labrador, Canada, before arriving at Shannon. It left Ireland for Sofia in Bulgaria. The aircraft is no stranger to Ireland, having previously been operated by Aer Lingus as EI-BXK. Once in Tajikistan it was due to become EY-753. Tajik Air currently operates two Boeing 737-300s and one -400, as well as two Boeing 757-200s.

Boeing 737-8LJ(WL) VP-BRF, (c/n 41195), named S Obraztsov, is the first of the type for Aeroflot Russian Airlines. The airliner was noted undergoing pre-flight preparations at Renton Municipal Airport in Washington on August 24, 2013. It is one of 25 of the variant ordered for the airline by Rostekhnologii (Rostec) and leased to it by Avia Capital Services. It is due to be handed over in September.

On September 5, 2013 the fifth (ZK087/319) and sixth (ZK088/320) Eurofighter Typhoon two-seaters of the second batch for the Royal Saudi Air Force departed Warton, Lancashire. Both will be assigned to 3 Squadron based at Taif-King Fahd Air Base. The initial pair of the follow-on order for 48 Typhoons (36 single- and 12 two-seaters) was delivered on April 24 and another on June 27, all four being operational trainers. Initial flights by ZK087 and ZK088 were made at Warton on May 14 and June 19 respectively.