Boeing E-3C Sentry 81-0005/‘OK’ (c/n 22833) is the new Airborne Early Warning and Control System testbed used by the manufacturer to test and demonstrate upgrades for the aircraft. It replaces JE-3C 73-1674 (c/n 21046), which entered storage with the 309th Aerospace Maintenance and Regeneration Group at Davis-Monthan AFB, Arizona, on April 23, 2012, after corrosion was discovered in the airframe. The new testbed is based at King County International Airport/Boeing Field, Washington, where it is seen on March 18, 2014, and uses the callsign ALLEN 003 HEAVY.

Lt Iva Matic, the first female helicopter pilot trained in Macedonia, in front of Bell 206B-3 JetRanger III 401 of the Pilot Training Centre at Petrovec air force base. 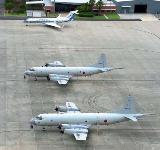 A boatswain's mate signals an MH-60R Seahawk helicopter to land on the flight deck of the guided-missile destroyer USS Arleigh Burke (DDG 51) under way in the Mediterranean Sea. Unless modified by Congress, FY2015 will mark the end of procuring the MH-60R. 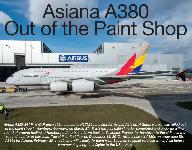 Airbus A380-841 F-WWAP (msn 152, to become HL7625), the first for Asiana Airlines of South Korea, was rolled out of the paint shop in Hamburg, Germany, on March 27, 2014. It will have its cabin interior completed and undergo a final round of ground testing at Hamburg before being flown back to Toulouse, France, for handover to the airline in the second quarter of this year. The airliner first flew on December 13, 2013. Asiana has six A380s on order and will initially fly them from Seoul on regional services within Asia before commencing long-haul flights to the US.

Yakovlev Yak-40K 1257 (c/n 9821257, ex OK-BYJ) of the Letecka Slozka Spolecnych Sily Armady Ceske Republiky (Air Component of the Czech Republic’s Joint Forces) at Budapest Ferenc Liszt International Airport in Hungary. The aircraft is one of two operated by 24.Zakladna Dpravniho Letectva at Praha-Kbely with 241 Dopravni Letka (Transport Squadron), the other being Yak-40 0260 (c/n 9940260). Both aircraft carry ‘Czech Air Force' titles in English, rather than the service's more formal name.

The Royal Canadian Air Force's tenth Boeing CH-147F Chinook (147310, c/n M3060) was delivered on March 13, 2014. The callsign CANFORCE 147 was used during the ferry flight. It flew from the factory at Boeing Helicopters Center 3 South Heliport in Ridley Park, Pennsylvania, to Toronto Lester B Pearson International Airport in Ontario, where it cleared customs and took on additional fuel. The helicopter then proceeded to its base at Garrison Petawawa, Ontario. The Canadian Government ordered 15 CH-147Fs in a CDN5 billion deal in 2009. The first was officially delivered in June 2013 and on average one aircraft has been handed over per month since. All of the CH-147Fs will be assigned to 450 Tactical Helicopter Squadron at Garrison Petawawa.

The third Boeing 767-300ER delivered to Air Canada rouge is the first for the carrier equipped with Aviation Partners/Boeing Blended Winglets. The jet, 767-333ER(WL) C-FMWU (c/n 25585), arriving at Toronto Lester B Pearson International Airport, Ontario, on March 21, 2014 - five days after being handed over - on its first revenue flight to Orlando, Florida. It received its winglets in Singapore just before joining Air Canada rouge. The aircraft also carries larger titles (centred over the windows rather than below) than the airline’s other two 767s.

This Ilyushin Il-78 Midas is the first example for the People’s Liberation Army Air Force.

Small Planet Airlines Airbus A320-233 SP-HAC at Dusseldorf, Germany, in March 2014 while flying for Afriqiyah Airways.

Boeing and Air New Zealand released this black and white image on April 5, 2014 showing the airline’s first Boeing 787-9 Dreamliner. The aircraft (ZK-NZE, c/n 34334) was rolled out that day in the airline's new livery, with the ‘New Zealand Way Fern' in white on a black background along the rear fuselage, mirroring the scheme applied to the rest of the carrier’s domestic fleet in recent months. Internal fittings and flight testing need to be completed before the Dreamliner can be delivered in July, becoming the first Dash 9 to enter service. Air New Zealand initially expected to receive its first 787-9 in late 2010. The other nine ordered will have a white fuselage and black fern.

Shorts Tucano T1 ZF244 of No. 72 (Reserve) Squadron is the RAF’s 2014 display aircraft, commemorating the centenary of the start of World War One in July 1914. The aircraft is based at RAF Linton-on-Ouse, Yorkshire, and painted with poppies on its nose, a red spinner and the words ‘Lest We Forget’ along the fuselage and under the wings. Tucano display pilot for the 2014 season is Flt Lt Dave Kirby, a Qualified Flying Instructor on the aircraft since 2009.

One of several interesting African head of state aircraft arriving at Brussels Airport in Belgium on April 1, 2014 was Boeing 737-2N9C(Adv) 5U-BAG (c/n 21499), named Monts Baghzane, of the Republic of Niger. (Monts Baghzane is the highest mountain in the country.) The aircraft was transporting officials to the 4th EU-Africa summit in the European capital. It has been in service with the Niger Government since it was delivered new on April 8, 1978. A large freight door has been installed on the port forward fuselage and the aircraft is equipped with a debris deflector on the nose wheel.

Airbus Defence and Space handed over the 17th HC-144A Ocean Sentry to the US Coast Guard at its facility at San Pablo in Seville, Spain, on March 20, 2014. Upon arrival in the United States the maritime surveillance aircraft (2317, c/n S-210) will be inducted into the Aviation Configuration Management System at the Coast Guard Aviation Logistics Center at Elizabeth City, North Carolina, to be prepared for service. The 18th and last will be delivered before the end of the year and the final three HC-144As are all due to operate from Coast Guard Air Station Corpus Christi, Texas. Originally 36 HC-144As were due to be acquired by the Coast Guard, but the total was halved after it was decided to transfer 14 surplus US Air Force Alenia C-27J Spartans to the service.

Dassault Falcon 2000 LZ-001 (c/n 123, ex F-WWVS) of the Bulgarian Government's Pravitelstven Aviootryad 28 (Aviation Unit 28) based at Sofia-Vrazhdebna Airport on approach to Brussels Airport in Belgium on April 1, 2014. The aircraft was taking delegates to the 4th EU-Africa Summit.

The prototype Learjet 85 takes off from Wichita, Kansas, for the first time on April 9, 2014.

Marine Medium Helicopter Squadron 364 (HMM-364) ‘Purple Foxes', based at MCAS Camp Pendleton, California, conducted a mass formation flight on March 31, 2014 before withdrawing the Boeing CH-46E Sea Knight. Known as ‘Flying the Barn’, the squadron attempted to put all 12 of its helicopters into the air for a flight around San Diego, California. Unfortunately a technical issue prevented one of the Sea Knights from participating. The unit will transition to the Beil-Boeing MV-22B Osprey, a process that is due to be completed by October, with its pilots and crew chiefs spending the intervening time at MCAS New River, North Carolina, learning to fly and maintain the tiltrotor. The squadron operated Sea Knights for 47 years.

Robinson R66 Turbine N9081D is the 500th example of the light helicopter to be produced.

The production-conforming prototype of the Cirrus Vision SF50, during its maiden flight on March 24, 2014.

Solar Impulse 2 HB-SIB prior to being revealed to the world on April 9, 2014. The aircraft features several improvements over the prototype to reduce weight and enhance efficiency.

FAdeA IA-63 Pampa II E-820 is the only example of the trainer currently painted in the Cruz del Sur's colours.

The three-screen cockpit proposed for the Pampa III.

Hongdu L7 prototype 01 displayed at Airshow China in Zhuhai in November 2010. The latest Yak-152 variant due to be produced as the Russian Air Force's next initial trainer is based on the L7.

Danish Air Transport McDonnell Douglas MD-83 OY-RUE (c/n 49936, ex YR-HBZ) has worn FIFA (Federation Internationale de Football Association) World Cup Trophy Tour colours since August 2013. FIFA contracted the carrier to promote the tournament due to take place later this year in Brazil along with Coca-Cola, one of the event's major sponsors. The airliner is seen at Amsterdam Airport Schiphol in the Netherlands on March 20, 2014.

Air Livery at Manchester Airport recently repainted two Gulf Air Airbus A321-231s, which have since rejoined the airline after a period in storage. Both A9C-CE (msn 5321, front) and -CF (msn 5336, rear) were originally delivered to the carrier on December 27, 2012 but returned to Airbus on February 13, 2013 as F-WXAF and F-WXAG respectively for temporary storage at Tarbes-Lourdes-Pyrenees Airport in France. The pair was rolled out of the paint shop on April 1, 2014 and departed Manchester the following day.

Boeing 747-4B5 10001 (c/n 26412, ex HL7465) of the Government of the Republic of the Korea arrived at Dresden Airport in Germany on March 27, 2014. It was carrying the Korean President, Park Geun-hye, during her seven-day visit to the Netherlands and Germany, which ended on March 29. The aircraft is operated by 296 Squadron of the 35th Combined Group based at Seoul AB and adopted its military serial in March 2012 in place of its civil registration.

Boeing 737-8K2(WL) N1786B (c/n 37791) is the first of the company’s Next-Generation aircraft to be produced after an increase in production to 42 aircraft a month. It is seen at King County International/Boeing Field, Washington, following its first flight on March 25, 2014. The airliner will be delivered to Transavia France as F-GZHL.

The Phantom Swift small-scale prototype at Boeing St Louis on March 14, 2014. This is one of four competing designs to have been accepted as part of DARPA's Vertical Takeoff and Landing (VTOL) X-Plane programme.