MIL Mi-6. The Mi-6 is a large helicopter and in some instances resembles the forthcoming Westland Westminster in basic layout even to the location of the two gas turbine engines mounted above the cabin. The Mi-6 designation indicates that it was developed by the Mikhail Milla design bureau and it bears a strong resemblance to its smaller predecessors, the Mi-1 and Mi-4. The engines are believed to be two Soloviev of 3,500 h.p. each, and they drive a five-blade main rotor and four-blade tail rotor. The engines appear to be coupled to a common gearbox provided with clutches and free-wheels giving a final shaft drive to the hub of the rotor. An air intake for the oil coolers is located between the main engine intakes, and an intake just ahead of the rotor hub would appear to serve the gearbox oil coolers. Already the Mi-6 has broken records, including the weight-to-height by lifting 26,464 lb. to an altitude of 7,874 ft. on 30th October 1957. The previous record was held by a Sikorsky S-56 which lifted 13,250 lb. to 6,560 ft. According to Russian reports the cargo compartment is approximately 39.5 ft. in length and when used as a passenger aircraft is able to accommodate seventy to eighty persons.
Salient features: Large single main and tail rotor twin gas turbine cargo and/or passenger helicopter, believed to be directly developed from its smaller brother, the Mi-4.

Photograph shows the prototype Boeing XB-52 Stratofortress making its first flight as a six-jet aircraft. The two outer Pratt & Whitney J57s have been replaced by a single Pratt & Whitney J75 rated at more than 15,000-lb. s.t. each.

Judging by the number of D.F. loops on top of the fuselage, the Israeli Dakota 3, 4X-FAK, which visited Blackbushe during the month, is a navigational trainer bent on outdoing the Valetta T.3 in the matter of dorsal impedimenta.

Far from home is this D.H. Venom photographed at Manila last year.

The twin fin and rudder of the D.H.C-4 Caribou has been dropped in favour of a single fin, and the result must be one of the largest vertical surfaces ever seen on an aircraft of this size. All production models will have this new feature. Span 96 ft. 0 in.; length 68 ft. 10 in.; height 36 ft. 0 in.

Rare photograph of the World War I Otto C.I.

The Soviet MiG-21 Faceplate supersonic fighter is a development of the MiG-19 Farmer, but differs in having a shock cone in the air intake, a fairing that extends from cockpit to fin leading edge, and a pair of small fins on the lower fuselage under the horizontal stabiliser.

The first six of a substantial fleet of de Havilland DHC-3 Otters were delivered to the Indian Air Force recently. Final completion of the contract will be in July next. The Otters will be used for search and rescue missions, as an ambulance, for photographic missions, and the hundred and one duties of the utility aircraft. It is powered by a Pratt & Whitney Wasp R-1340-AN-3 radial engine of 600 h.p., and has a maximum speed of 160 m.p.h. Range is 960 miles. Dimensions: Span 58 ft. 0 in.; length 41 ft. 10 in.; height 10 ft. 6 in.

The English Electric P.1 supersonic fighter has been described as "The last manned fighter for the R.A.F." Whether this is true or not only time will tell. The P.1B shown here is equipped with two de Havilland Firestreak infra-red air-to-air missiles - standard armament in addition to the fixed cannon in the fuselage.
A dramatic publicity photograph of the Lightning shortly before its entry into RAF service, highlighting its futuristic appearance and ability to intercept any aerial threat with its state-of-the-art de Havilland Firestreak infra-red homing guided air-to-air missile system.

The Cessna "Skylane" is not a new aircraft, but basically a Model 182 with various improvements. Main differences are new fibre-glass speed fairings on the wheels which give the Skylane a three-mile-per-hour speed increase over the 182; the fitting of the Cessna "Land-O-Matic" landing gear; and a new three-colour exterior paint combination. It has a maximum speed of 168 m.p.h. and a gross weight of 2,650 lb. Dimensions: Span 36 ft. Oin.; length 26 ft. 0 in.; height 8 ft. 6 in.

Viscount G-APDW, in its smart Eagle livery, is a welcome compensation for the loss of two familiar and well-liked old-timers.

ZK-BRD "City of Wellington", first of three 807s, left London on 1st january, and was due in Auckland on the 10th, flown by Capts. Walker, Harvey and Register. Flying time on the scheduled Christchurch-Auckland run will be cut by nearly half to 1 hour 55 minutes. [New Zealand National Airways Corporation]

Photograph showing a Sud Est S.E.3130 Alouette II in service with the Portuguese Air Force. Three have been ordered and carry the numbers 9201, '02 and '03.

ZP-CBR/97 is the first of two Lincoln Freighters converted for use in Paraguay by Field Aircraft Services Ltd. at Tollerton. The pannier is considerably longer than the single British conversion, G-ALPF, of 1949-52.

Photograph is of the Lockheed Electra on its first flight. It is powered by four General Motors Allison 501 turboprops which develop a total of 15,000 h.p.

As the Rapide JY-ACE was formerly TJ-AAD, it may well be that Rapide JY-AAE will be moved to the adjoining marks JY-ACF. 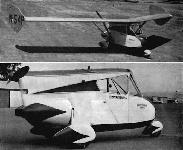 These photographs illustrate for the first time the Waterman Aerobile. Upper is the Aerobile in full flying trim, and lower the same machine as an automobile.

New Swedish missile is the Type 304 air-to-surface weapon, powered by a rocket motor. It is seen here fitted to a SAAB-32 Lansen. A development of the 304 is the 315, which is a naval surface-to-surface missile.

The aircraft is an Armstrong Whitworth Atlas trainer, one of the fourteen Atlases (R.C.A.F. Nos. 402-415) known to have been supplied to Canada, and of which no less than thirteen were on R.C.A.F. strength on the first day of the last war, 3rd September 1939.

Last picture of the ill-fated Aiglet Trainer, AP-AJN, c/n. 3145, taken at Eastleigh prior to delivery on 10/5/57. This aircraft has just been cancelled from the current Pakistan register.

Twin Bonanza, N.7777 (c/n. CH.80), owned by the Dhofar-Cities Services Petroleum Co. Inc., exhibits its licence number more convincingly than most. It has recently visited Bahrein from its base at Salalah in the Aden Protectorate.

The first British-built Turbulent, G-APBZ (c/n. PFA.440), has been completed by Rollasons and is seen here with Mr. Norman Jones after he had made the first test flight at Croydon on 1st January. A second Turbulent, G-APIZ (c/n. PFA.478). is now under construction by the firm.

North American's Mach 2 fighter-bomber, the F-107A, was cancelled before reaching production, and one aircraft of the three built has been turned over to the National Advisory Committee for Aeronautics for test purposes. The overhead air intake was designed to provide maximum efficiency for the Pratt & Whitney J75 turbojet, which is in the 20,000-lb.s.t. class.

NORTH AMERICAN F-107A. One of the world's fastest aircraft is the North American F-107, which is claimed to be capable of a speed of Mach 2 in level flight. Apart from the unusual position of the air intakes the aircraft resembles its predecessor, the F-100, in many ways. In addition to an all-movable horizontal tailplane it has an all-moving fin. A spoiler system for lateral control during high-speed manoeuvres consists of hinged doors on the upper and lower wing skins that control the passage of air over these surfaces. The overhead air duct was designed to provide maximum efficiency for the Pratt & Whitney J75 turbojet engine, which provides more than 20,000 lb. thrust. The F-107 will not be produced as it was dropped in favour of the Republic F-105 Thunderchief. Three prototypes were constructed, and two have been turned over to the National Advisory Committee for Aeronautics (the third is now in the National Air Museum), and will be used for supersonic testing and compilation of research data at Edwards Air Force Base. Studies scheduled include investigating control characteristics of an aeroplane with an all-movable fin, in-flight evaluation of the dorsal air inlets for the engine, and a general analysis of the flying qualities of the F-107 which incorporates many new ideas in control systems. General performance reveals that it flies in the region of Mach 2 in both level and climbing flight and exceeds Mach I in a vertical climb. Maximum air speed is in excess of 1,300 m.p.h.

A new French light two-seat monoplane is the Legrand-Simon LS-50 Dauphine, designed and built by an ex-Breguet engineer M. Simon, and Paul Legrand who is with the SNECMA organisation.

S-4 KANIA 2. This aircraft, designed by E. Stankiewicz, was developed from the earlier S-3 Kania, which was built in 1951 at the Bielsk Works, and was refused a permit to manufacture by the Aeronautical Institute in Warsaw, mainly on the grounds that there was no demand for this type of aeroplane. Recently, however, owing to a change of national policy, the design has been revived, modified and has now reappeared designated the S-4 Kania 2. Work started on the Kania 2 at the W.S.K. Works, Mielec, in April 1956, and an initial batch of three aircraft was put in hand, the first of which received a permit to fly on 31st August 1957 and made its maiden flight on 3rd September.
The Kania 2 is primarily envisaged as a replacement to the CSS-13 (Po-2, NATO "Mule"), and is intended to fill glider towing, parachute training and club flying and training roles. Powered by the same engine as the CSS-13, the M.11.D of 125 h.p., the Kania 2 shows a considerable improvement in overall performance. The aircraft is mainly constructed of wood, the single spar, 5-degree swept mainplanes being partially plywood covered. The fuselage, which is of the semi-monocoque type, is covered with a stressed plywood skin. The control surfaces are fabric covered. The tandem cockpits are fully equipped for dual control, the passenger occupying the front seat,'and the machine is fully aerobatic. The seats are suitable for the seat-type parachutes used by sporting parachutists, and there is a capacious luggage compartment behind the rear cockpit. The fixed undercarriage is sprung by rubber in tension, and low-pressure, small-diameter tyres are fitted. There is a possibility that a more powerful engine, M.11.FR of 160 h.p., will be fitted at a later date.

The L-21S Flying Vinta, developed by the Aircraft Research and Development Unit of the Institute of Science and Technology of the Philippines. Now under construction, it has room for four people or for a pilot and 550 lb. of freight. It will span 37.39 ft. and have a length of 27.88ft., and be powered by a Continental O-470-B engine of 225h.p.

BURGFALKE M-150 SCHULMEISTER. Developed from the A-15 (WN-16) aircraft, designed by the former Wiener-Neustadt company, the M-150 Schulmeister (Schoolmaster) is a two-seat, low-wing type which can be used for various duties including training, communications and liaison. A layout incorporating a pusher propeller was chosen as the majority of German student pilots learn to fly in gliders, and it was thought that they could learn to handle a powered aircraft more quickly with an unobstructed forward view. Another point in the favour of this type of layout is that future pilots of military aircraft will most probably be flying jet-propelled types, which again have a clear forward view. The M-150 is capable of simple aerobatics, and the makers claim that it is almost impossible to spin even under extreme flight conditions. Construction is of mixed wood and steel, the main structural members being of steel. The wing and tail units are mostly of wood, with the leading edge and undersides ply covered, and the upper surfaces fabric covered. Fuselage is of a tubular structure and fabric covered.
Salient features: Low-wing, twin-boom and fins monoplane with fixed undercarriage. Cockpit seats two in tandem under a large clear-view canopy.

The Miles Peregrine Boundary Layer Survey aircraft. This photograph shows the Peregrine used for these experiments.

A little-known ultra light which appeared before the last war was the Luton Major.