Blackburn Buccaneers of the Royal Navy are now finished in the "all-white" standard anti-atom-flash colour scheme.

The Saab J35F is the latest version of the Draken. It is armed with four Hughes Falcon air-to-air missiles.

A de Havilland DHC-4 Caribou has been experimentally fitted with skis and is under evaluation by the United States Army. If the skis are successful a small production order may be placed.
All five of the YAC-1s were used for an extensive flight test programme with the Army, including operations with skis from snow and ice. 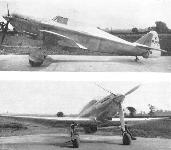 The A.W. 660 Argosy (picture) and Short Belfast transports will be equipped with the Flight Refuelling probe-and-drogue system, and these artist's impressions show where the probes will be fitted.

The Short Skyvan II, powered by Astazou turboprop engines, is a direct development of the Skyvan Mk. I.

Lightnings of 111 Squadron. The new marking replacing the former black bar consists of a black lightning flash through the roundel outlined in yellow. 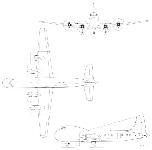 Aviation Traders ATL 98 Carvair. THE CARVAIR is a conversion of the Douglas DC-4 airframe and as such can carry five cars and twenty-five passengers. Differences between the DC-4 and the Carvair are confined mainly to the nose, fin and rudder. A completely new nose section with an elevated cockpit and nose door replaces the front fuselage of the basic DC-4 and it is this new nose that makes the Carvair distinctive. Although intended primarily for car-ferrying operations, the aircraft can be operated as a pure freighter or in a combined passenger/freight role. In the case of the latter a movable bulkhead which separates the passenger and freight compartments is moved to give a thirty-two-seat passenger cabin and a hold which is large enough to take four medium-sized cars or combinations of freight and cars. Aviation Traders are initially converting ten DC-4s for Channel Air Bridge and the rate of progress is that the second Carvair will be in service by the end of the year and four will be flying next year. Data: Wing span 117 ft. 6 in., length 102 ft. 7 in., height 29 ft. 10 in., loaded weight 73,800 lb., empty weight 40,372 lb., cruising speed 180 m.p.h., range 1,700 miles. 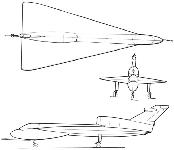 The A.W. 660 Argosy and Short Belfast (picture) transports will be equipped with the Flight Refuelling probe-and-drogue system, and these artist's impressions show where the probes will be fitted.

No. 90 (Search and Rescue) Squadron of the R.A.A.F. is to be equipped with Bell HU-1B helicopters. Delivery is expected to be complete before the end of next year.

The BEAGLE Mark Eleven - Primarily a military A.O.P. but has many other uses.

The BEAGLE B.206 - a four seven seat luxury aircraft with twin engines.

Developed from Benson designs by W/Cdr. K. H. Wallis, the McCulloch-powered G-ARRT is now referred to as the Beagle-Wallis WA.116 autogiro.

Two new Pipers for 1962 are the (photo) Comanche 180 and the Colt. Both are basically similar to last year's models with many internal improvements.

The first Jindivik Mk.102B pilotless target drone to be modified and assembled in this country by Fairey Engineering Ltd., flew for the first lime on 19th July.

Scintex ML-145 Rubis. THE PROTOTYPE ML-145 Rubis made its initial flight during last May and is aimed at the market now catered for by the Piper Comanche. The Rubis seats four passengers, two sets of two in side-by-side seats, under a large canopy which is distinctive with its unobstructed side windows and one-piece windscreen. The aircraft can be used for the transportation of company executives or used as an air tourer. The powerplant consists of one 145-h.p. Continental O-300B engine which provides a maximum speed of 155 m.p.h. The main landing gear wheels are electrically retracted and have a manual emergency system, but the tailwheel is fixed. Dual controls, blind-flying instruments, VHF/ HF radio and radio compass are standard fittings and there is ample baggage space behind the rear seats. Provision is made for glider-towing. Data: Wing span 33 ft. 8 in., length 25 ft. 5 in., loaded weight 2,337 lb., empty weight 1,310 lb., maximum speed 155 m.p.h., cruising speed 144 m.p.h., range 850 miles.

G-ARIT, the first Temco D.16 Twin Navion on the British register, was a recent visitor to Biggin Hill.