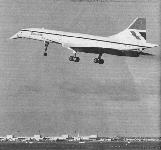 Gulf Air, flag-carrier of the Gulf States (Bahrain, Qatar, United Arab Emirates and Oman), took delivery of the first of four Lockheed TriStars, G-BDCW, on 20th January 1976 and will introduce the aircraft into service on the Bahrain-London route on 1st April. Claimed to be the most luxurious airliner ever built, the four TriStars will have 173 economy and 40 first-class seats.

Antonov AN-12 LZ-BAB of Balkan-Bulgarian Airlines during a recent visit to Heathrow.

Russia's SST, the Tupolev Tu-144, at Domodedovo-Moscow before its first regular freight flight to Alma-Ata on 26th December 1975.

Almost ready for delivery to the Pakistan Navy, this Breguet Atlantic is one of three ordered and has the fin code "33". Note fouled anchor marking over the roundels

PT-KRP, one of the many Islanders employed in the geophysical role in South America, was equipped with "stinger" tail by Geometries Inc. in California for mineral exploration by ENCAL in the undeveloped hinterland of Brazil

This U.S. Army Bell HueyCobra is now being tested with a new composite tail boom developed by Hughes Helicopters and designed for longer life and greater "survivability" in combat

First R.A.F. Lightning to appear in grey/green camouflage and full squadron markings, F.3 XP753 of No. 5 Squadron is seen at Binbrook on 19th January 1976.

Recently delivered to the Argentine A.F.. this Sikorsky S-61R, H-72, will be used for long-range supply and search and rescue missions in the Antarctic, based at Marambio

The 800th McDonnell Douglas DC-9 built. OH-LYN, which is the first of six new Series 50s ordered by Finnair, was delivered to Helsinki after installation of its 130 seats on 27th January 1976, staging through Luton. DC-9s have flown 714 million passengers in ten years of service.

Перед кабиной пилота Type 138 было предусмотрено место для второго члена экипажа.
The Bristol 138A, K4879, which twice gained the World Altitude Record for Britain. On the second occasion, on 30th June 1937. F/Lt. M. J. Adam, taking off from R.A.F. Farnborough, reached a height of 53.937 ft. During the flight, which lasted 2 1/2 hours, the cockpit canopy cracked but Adam was saved from injury by his pressure suit; inflated with oxygen, it had a sealed helmet resembling early astronaut's gear.

General Aircraft Monospar ZK-AFF (ex G-AEJW, c/n. 84) at Hastings, New Zealand. Last airworthy example of its type, it is used for aerial survey work by New Zealand Aerial Mapping and is expected to take part in the Royal New Zealand Aero Club Pageant at Palmerston this month, on 13th March 1976

Quite a rare bird now, Martin JRM Mars C-FLYL "Hawaii Mars" is seen undergoing routine maintenance at Sproat Lake, British Columbia, Canada, on 14th September 1975 after water-bombing a forest fire. This flying-boat and one other, out of four purchased by the B.C. Flying Tankers Organization in 1960, are still in regular use

First flown on 29th September 1975, this Grumman Gulfstream II is one of two aircraft which have been modified for NASA to act as trainers for future Space Shuttle Orbiter crews in the critical descent (from 35,000ft.) and landing phase. Mods, are designed to simulate the Orbiter's cockpit and flight characteristics

The Seychelles register is illustrated by the local aero club's Cessna FRA.150M VQ-SAF

The "Leo-Cat", a Grumman Ag-Cat re-engined with an Alvis Leonides in place of its original Pratt & Whitney R-1340, was displayed at the recent National Agricultural Aircraft Convention at Las Vegas, California, and has since been put on rice spraying operations. The Leonides has previously been used to re-engine the Rockwell Thrush Commander and may also be fitted to one of the new Snow Air Tractors

Despite the anti-Concorde "industry" in the U.S.A. and elsewhere, McDonnell Douglas are continuing studies of an AST (advanced supersonic transport) designed to carry 237 passengers up to 4.400 naut. miles at a speed of Mach 2.2. As shown by this artist's impression, the aircraft has a NASA-designed "arrow" wing

Mention of the Smithsonian Institution's Bucket Bu 133 Jungmeister prompted Gordon Riley to send us this photo of the aircraft, N15696, which he took in August 1974. Inscription on upper upper surface of lower wing is a potted history and mentions that the Jungmeister was brought to the U.S.A. in the airship "Hindenburg". Aircraft behind is the Laird-Turner LRT-14 Racer R263Y "Miss Champion"